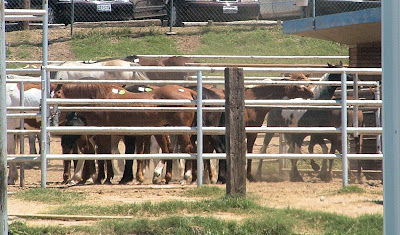 We agreed to meet in a little bar that had a reputation for good food and after the introductions, jumped right into the reason for our long drive. Horse rustling is what it use to be called and the people that sat across from me were adamant – “They took our horses!”

Over the weekend of August 6th, 2006, residents noticed a helicopter flying repeatedly over their houses. They were used to it though, as government agencies of one sort or another were always flying and driving around and most didn’t pay too much attention - except one guy who actually went out to see if he could find out what all the ruckus was about.

He said he found a collection of temporary pens set up and a wrangler hanging out by the gate who explained, “they” were there to pick up about 200 horses. Later, when asked to come forward and testify to this fact, the man refused as many of the residents did, mostly because they held a variety of government jobs and feared retaliation if they spoke up.

The people sitting across from me described what life was like there, a small little mountain community that had the unusual advantage of wild horses wandering through the yards on a daily basis. All had been named and they told stories describing each horses personality, how many foals showed up over the spring and scattered photos everywhere as they tried to impress upon me how intimately they knew the habits and hierarchy of the local herds.

“One of the twins is missing”, one said describing a little black foal that had a perfect white heart outlined in the center of its chest. “And all the paints are gone too”, another added.

For over two weeks, they had been driving around on their ATVs and hiking back into the farthest reaches of where the herds were known to hang out but every expedition had ended the same – most of the horses they knew were now gone.

One of them was just kicking themselves as it was THAT weekend they had been away on a long-planned trip and it was only when they returned, they noticed how empty the place had become. They started asking neighbors if they noticed too and this led to the guy and his conversation with the wrangler about the 200 horses being picked up.

Everybody started calling BLM and US Forest Service, demanding an investigation into who took the horses.

At first, BLM just tried to ignore them but residents would not be put off until someone came out to take a look. “Cranky” was the word used to describe BLMs attitude (okay, it was really “shitty” but I felt I should clean it up a little).

Once BLM went out and did their mandatory drive by, they told everyone “Okay, we drove around, nothing happened, the horses are just up in the hills” but residents weren’t buying it because they knew those horses and swore they weren’t anywhere to be found.

So they did what every other sane person would do – they scheduled a flight with a helicopter pilot to fly around the area to see if they could find the horses themselves.

When BLM found out about it, suddenly attitudes changed and they started taking residents claims of horse rustling very seriously - they even had high level officials fly down to meet with them to discuss their concerns.

First, BLM told everyone that they would conduct the flight and report back on how many they found, they even volunteered to provide an “independent observer” from a horse advocacy group, which turned out to have a long history of pro-BLM support - of course no resident from the community was allowed to go along for the ride.

When that didn’t work, BLM reminded them if they flew a helicopter over those wild horses themselves, it would be considered harassment, something illegal that BLM was prepared to pursue, and in the end the residents became afraid and cancelled the flight.

The missing horses, including the little black foal, have never been seen again but miraculously, when BLM conducted the official round ups of the herds later that year, they reported hundreds of horses were captured and removed from the area, proving once and for all that no wild horses had ever been taken just as they had been telling everyone all along…..

Except no one was allowed to see the round ups, the location of the holding pens were strictly guarded, a massive police presence made up of BLM, US Forest Service, and State Fish & Game wardens lined the highways keeping the public at bay and the local news helicopter found BLM escorting them out of “their air space” as they tried to get some independent footage of the operations.

One of the horse advocate groups the residents contacted right after they discovered the horses were gone asked if anyone had taken photos of the helicopter, explaining that it took a pretty big outfit to scoop up 200 wild horses in just a few days and they only knew of a few contractors capable of handling that kind of operation - but no one knew they were stealing horses at the time so no one thought to take photos of just another helicopter.

In a 1998, a news article buried in the wild horse archives titled, “The Horses Rustlers: How Scam Artists Abuse a Federal Adoption Program for Wild Horses”, reporter Wendy Williams interviewed ex-BLM special agent Steve Sederwall, who provides detailed accounts of how the BLM regularly rounded up and sold wild horses to killer buyers in lucrative, under the table deals.

Sederwall suspected BLM employees themselves were setting up the horse rustling programs, pocketing $500.00 for every horse they illegally sold and stated they were able to do this because the wild horses were never branded at the trap sites. Some were loaded on one truck and some loaded on another and nobody could tell the difference between a federally protected “wild horse” and just a plain old horse headed for the slaughter house, like tens of thousands did every year.

This is what the mountain community residents had feared most – an illegal operation that sent their beloved horses to slaughter but BLM tied their hands at every turn and in the end, the horses disappeared forever.

Sederwall also claimed part of BLMs scam was to pick up wild horses from one area in secret and take them to another area to prove an “overpopulation”, which now justified new rounded ups. Then BLM would scoop up all the secretly transported horses plus the original herds because the goal was to provide the forage in the area for livestock instead – plus picking up some serious cash for their efforts.

Thinking about this myself, it would seem to me that this would also help BLM support their allegations of incredibly high reproductive rates, some BLM has reported as high as 60%, never mind that the National Academy of Science reported wild horses and burros reproduced at 10% or less - more often less. This keeps the funding in motion, justifies the constant round ups, and feeds the myth of wild horse excess and overpopulation that keeps taxpayer money flowing to contractors and employees alike.

Lately, the mountain community residents have been reporting dozens of wild horses showing up they have never seen. The horses are drawn to the abundant water in the area and amazingly, it is starting to look like another “overpopulation” is beginning to happen, despite round ups taking over 1,000 wild horses just last year and BLM reporting they left less than 100.

When I asked if the new horses could be abandoned instead, the residents absolutely swear they are wild stating, "You can tell the difference between a wild horse and a domestic horse with just a glance and these horses are wild. We know the difference!"

Meanwhile, BLM just laughingly tells the public, “Prove It!”
Posted by Preserve The Herds at 4:02 PM