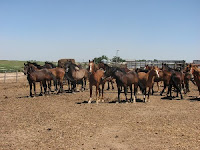 There may be vehement opposition by the public lands ranching industry to the idea of actually having to pay the full amount of $1.35 to feed a cow and calf per month without getting the “bonus forage” for free as described in the last post, “Get One Free!”.

So how about this idea….

One of BLMs latest spins on their need to euthanize or slaughter our now warehoused American wild horses and burros is the amount of money BLM projects it will cost to feed them in the future because “wild horses and burros are a long-lived species with few natural predators”. Except of course when they are out in the wild, according to BLMs Wild Horse and Burro Division Chief Don Glenn through his response to the January 15, 2008 Quarter Horse News article “185 Wild Horses Dead”.

Here Mr. Glenn stated, “after the horses have grazed for 12 or so years on the coarse forage and sandy soils where they live, their teeth are usually worn down and broken, which makes it hard for them to eat. When winter or drought comes, they die of starvation and/or hypothermia.” However, it would appear that when these same captured wild horses are placed in BLMs containment centers, their life span is projected to double to about 25-30 years old.

Since BLM is not allowed to outright slaughter wild horses and burros yet (though God knows they are trying!), how about we just exchange livestock for the wild horses now being warehoused in BLMs containment centers?

According to the 2005 Government Accountability Office’s Report (1), the public lands ranching industry has been completely insulated by the inflationary pressures raging around the rest of the American public as analysis showed comparable fees in todays dollar values would require agencies to charge at least $5.94 per month to feed a cow and her calf at still rock bottom prices, at least that was the case in 2005 – it’s probably even higher now. 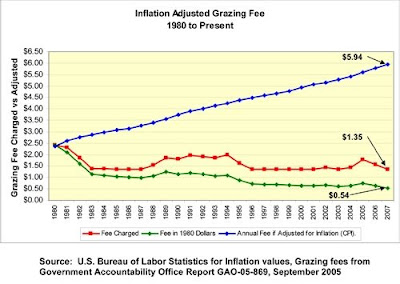 The livestock BLM manages on public lands can then be fed in the same containment centers with the same budget used for our wild horses and burros without any projected increases in the future. Since cattle and sheep are raised for slaughter, BLMs obligations to feed and hold them will be minimal as they will constantly be shipped out and “disposed of” as the Burns Amendment and its resulting “For Sale Authority” now authorizes for wild horses and burros.

Imagine…..there would be no reason to spend money on predator control to protect ranching interests, no reason to round up masses of wild horses and burros and contain them and no reason for taxpayers having to fund endless livestock authorization documents or the massive litigation BLM is always involved in regarding environmental and wildlife issues that seem to plague excessive livestock authorizations on public lands.

In 2002, the Center for Biological Diversity issued an economic analysis entitled, “Assessing the Full Cost of the Federal Grazing Program”. The report estimated that the true cost to taxpayers and the environment from public lands ranching was closer to $500 million annually. (2)

Other notes of interest from the CBD’s report included:

“In the early 1990s, the Clinton administration moved to reform the management of public rangelands through a wide-ranging revision of the fee formula as well as BLM administrative regulations, known as Rangeland Reform '94 (USDI and USDA 1994). A new base rate for the years 1990-1992 of $3.96/AUM was proposed with annual adjustments based solely on changes in a Forage Value Index and a cap of 25 percent change per year. This reform was predicted to greatly increase cost recovery for the U.S. Treasury. Revenues from the increase were projected to be $76 million over five years, beginning with an increase of $6 million in 1994, increasing to $35 million in 1997. By comparison, actual receipts for 1992 were about $10.7 million. Ultimately, the fee reform was never adopted, however.”

“Recently, federal auditors criticized the BLM and Forest Service along with many other federal agencies for the lack adequate financial accounting that would permit an audit to be done. The USDA was described as the “worst managed” agency. The Forest Service was unable to figure out how much money was available and overspent by $274 million in 2001 (Brinkley 2002).”

It was also estimated that BLM spent “$34 million on soil, water, and air and much of this budget is necessitated by or benefits ranching while citing livestock are the principal cause of soil erosion and stream degradation” (Jones 2000, Belsky et al. 1999) And an “additional $22.5 million was spent on protecting riparian areas where livestock were cited as the most pervasive cause of the riparian damage, as high as up to 80 percent of westerns streams.” (Belsky et al. 1999).

Despite all this, it is estimated that as of 2005, only 2% of the nation’s beef is produced from cattle on public lands (3) and while BLM maintains the financial costs of the Wild Horse and Burro Program have become “unmanageable”, they share no similar concerns for the costs and losses resulting from livestock grazing or the considerable resource damage and financial shortfalls that have been repeatedly documented for decades.

So how about we just make it official and get BLM into the domestic livestock industry?

Then they can manage official feedlots instead of putting on the pretense that public lands forage is being managed for “multiple-use”, the ranching industry would still get cheaper rates than if they were trying to feed their livestock through private grazing fees, BLM would still be overseeing the operations, getting their cut and the American taxpayer could be spared the façade, expense and ecological damage now being foisted upon us through the public lands grazing system as it is currently being run today.

The wild horses would pass away in half the time than if they are captured (if we can believe Mr. Glenn’s statement), natural predators would now be free to help control populations and BLM could finally have some funding to do the monitoring of rangeland resources that are the legal foundation for all their decisions - which, as it stands today is WAY too often decades old or completely absent altogether.

Half the wild horses BLM is currently warehousing have already been castrated and are incapable of reproduction so let them run free and let the cattle and sheep stand in their pens instead. Then all BLM would have to manage is sending ranchers their checks for the service.

(1) GAO, Livestock Grazing, Federal Expenditures and Receipts Very, Depending on the Agency
and the Purpose of the Fee Charged, September 2005, GAO-05-869
http://www.gao.gov/new.items/d05869.pdf
(2) Assessing The Full Cost of the Federal Grazing Program, Moskowitz, MBA, Romaniello, MS
Ag. Econ., Prepared for the Center of Biological Diversity, October 2002
http://www.westernwatersheds.org/reports/full_cost/fullcost.pdf
(3) Organic Consumer-2005 http://www.organicconsumers.org/Politics/grazing062105.cfm
Posted by Preserve The Herds at 4:54 PM