While BLM is busy complaining how they don’t have any money and all eyes are poised on the 33k wild horses and burros whose lives are now in peril, it hasn’t stopped them from cranking out more management plans to haul more out in the future.

The Las Vegas Field Office has issued a new Herd Management Area Plan (HMAP) for the Gold Butte Herd Management Area (HMA) and is currently accepting public comments until September 19, 2008. This plan will become the legal foundation of their authority for the next 10-20 years and can be downloaded by Clicking Here.

The Gold Butte HMA is exclusively managed for wild burros, the last of three the Las Vegas Field Office hasn’t yet zeroed out around Lake Mead, but it looks like they are coming in for the kill with the new HMAP as BLM is only offering two options – their New Plan or No Action.

The Lake Mead Conservation Area use to be the third largest concentration of wild burros in the West with BLM estimating about 800 burros in the area, 600 in Gold Butte alone. Yet in 1998, a new Resource Management Plan reset their population objectives, zeroed out one HMA and slashed the allowable management levels (AMLs) to only 148. In 2005, BLM went back and zeroed out another HMA using highly questionable standards (Muddy Mountains) and today, BLM has determined the “maximum burro use” for the entire Lake Mead area is 98 wild burros on Gold Buttes 271k acres.

The Las Vegas Field Office has claimed this number was derived from “in depth monitoring reports” done in 1991 but apparently, that information doesn’t exist anymore or if it does, BLM has so far refused to admit it. A current Freedom of Information Act (FOIA) request is now in to see if they want to stick to that story….

Speaking of monitoring, check out this report done in 2001 of the Gold Butte HMA by Clicking Here. Here is a sample photo of the areas surveyed for wild burro use back then. 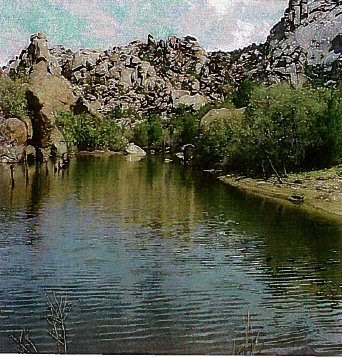 Now check out the areas BLM has established as their “key monitoring sites” in 2007 to determine future burro use by Clicking Here. Here is a sample photo of the areas BLM is now monitoring. 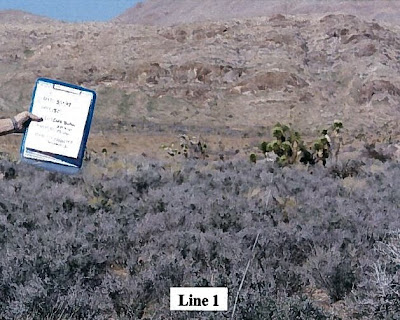 Anybody notice a MAJOR difference in the two areas being used to determine “rangeland health” and what can support future burro populations?

There’s some other pretty major issues going on too, the first being the 2001 report indicates that there’s a lot of fencing around springs with troughs and pipes supplying water for the burros outside the fences. BLMs new HMAP completely fails to authorize maintenance nor do they provide any stipulations that new fences will be required to provide water outside for continued burro use. BLM lists 24 springs in the Gold Butte HMA but were “unable” to answer questions about how many were now fenced or if they provided water outside for the burros.

The second thing that really stands out is, according to the 2001 monitoring report, those surveying the area said they could find almost NO burro use anywhere and what little they did find was very light. They also stated it was obvious that a round up had recently taken place as areas that had received heavy use “last year” (that would be in 2000) showed absolutely no signs of any burros anywhere.

In March 2006, BLM schedules an “emergency gather” of the Gold Butte burros due to wildfires destroying approximately 50% of their home range. The National Gather Schedule reported BLM only removed 132 but other documents found 151 were taken – so 19 more burros disappeared without being reported yet again.

Three months later, BLM announces about “60 animals” need to be removed from Lake Mead but the count keeps going up and by March 2007, just one year later, BLM takes:

In the Las Vegas Field Office’s 2007 Post-Gather report, (Click Here) BLM cited removals occurred between March 16-27 with no deaths occurring ~ yet in other documents, one burro was listed by BLM as dead and/or euthanized on March 20. After the burros were shipped to holding facilities, 15 more died or were put down between April 10 and April 22 (at least we can rest easy knowing the contractor got paid by getting them to the holding facilities) and by October 2007, a total of 12% of the gathered burros were now listed as dead according to BLM Capture Status Reports.

So in March 2007 BLM pulled out another 140 burros but in May 2007, yet another census counted 48 burros that BLM “adjusted” to 186 burros. Say what? (Read that again in case you missed it the first time and if you are wondering where BLM has been spending all their money, maybe they spent it counting the Gold Butte burros!)

Apparently, there was a massive die-off or maybe National Park Service just removed them because yet ANOTHER census in December 2007 reported only 94 were found; 50% less than their May 2007 “adjusted count” but still 50% higher than BLMs direct count after the March 2007 removals. By the by, BLM only reported finding 3 foals in December 2007…..

So why would this matter? Well, the HMAP plans on not actually creating a formal document to reduce the Gold Butte AML, they are just “slipping in” a provision that the wild burro population will be maintained within the “AML Range” by keeping them between 22-49. When burro populations exceed 49, they are authorizing their removals, even though they will always be 50% lower than the “high” AML of 98. How sneaky is that, huh?

And of course, it is imperative that BLM “adjust” the 48 burros to 94 so when they rubber stamp their approval on the only alternative offered in the new HMAP, they can schedule new round ups to remove more burros to maintain them in their newly approved AML “range”.

In 2001, the surveyors could barely find any evidence of wild burros left at all. Since then, BLM has removed 311 more that has been reported. After looking at the habitat comparison and seeing how many burros BLM has been removing since 2001 (?), check out this You Tube Video BLM made with Las Vegas Field Office Wild Horse and Burro Specialist Jerrie Bertola and the Nevada Commission for the Preservation of Wild Horses administrator, Cathy Barcomb by Clicking Here. Any of this sound familiar?

The good news is, when BLM was slashing wild horse and burro AMLs for Southern Nevada in 1998, they simultaneously approved of managing bighorn sheep populations to achieve the “potential goal” of 228-252 in Gold Butte, 500-550 in the now zeroed out Muddy Mountains and 400-450 in the equally zeroed out El Dorado area.
Current stats for Southern Nevada are:
Bighorn Population Objectives ~ 3,800
Wild Burro Population Objectives ~ 255
Now with the ONLY alternative BLM is offering the public to manage the Gold Butte burros over the next 10-20 years, we can count on it dropping another 49 burros to only 206 throughout the “life of the plan” (unless of course they make a new AML determination now scheduled for 2010. BLM will be allowed to decrease the AML range but the new HMAP locks in the “rules” to remove them when they hit 49 burros if the AML is still “over” this number).

Since BLM is only offering two options, the New Plan or No Action, please support and urge BLM to choose the No Action Alternative until a viable option is presented for sincere management. In addition to their currently proposed minimal management strategies, the following considerations should at least be include in a management plan that extends for two decades.

*An Alternative that allows the wild burro herds to reach their high AML range of 98 before BLM removes them, not 49 as the current plan is written.

*Including maintenance of the existing water developments (aka, troughs outside fenced springs) and require water be provided if any new springs are fenced.

*Allow the burros forage measurements to still extend 10 miles around water. The new plan only allows 1-3 miles to be used, a very short distance for burros!

*Must present a rangeland recovery plan for those portions of the HMA that were burned by wildfires. Currently, BLM has no plan in place to help the burros survive for the next 20 years.

*Establish a time frame for migration patterns allowing the burros to use Lake Mead water in the summer. Though burros have always gone here, BLM has no set time allowance for their migration and they can be removed at anytime.

*Do not continue to allow National Park Service to remove or dispose of this last remaining burro herd. All removals must be done by BLM through normal procedures.
Comments must be postmarked or received by
Friday, September 19, 2008.

Also you must include
Gold Butte Herd Management Area Plan
EA # NV052-2008-435 in all correspondence. 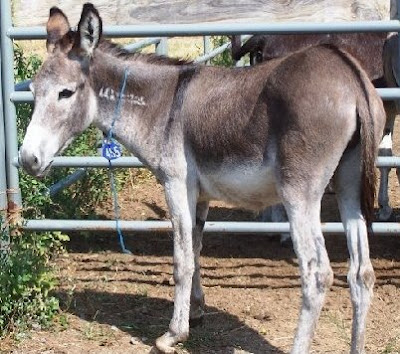