Wielding Wildlife (And Other Stories) 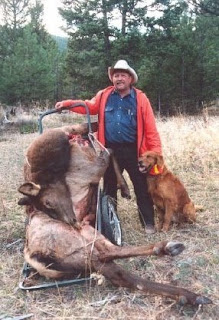 "To kill elk, hunters have to access elk"
Photo and quote from "Elk Management in 5 Western States (Montana, Wyoming, Idaho, Colorado and Utah) - A Challenge For Us All"
2007 estimated elk populations within these states -
675,000 to 700,000.

Well, who didn’t know this was coming?

Today, an article in the Ely Times announced Nevada Wildlife Commissioners and Nevada Department of Wildlife (NDOW) have given two thumbs up to opening several areas in the Nevada to livestock grazing, which had been closed due to wildfire damage. Click Here to read, “State Wildlife Commission to open areas for grazing”.

Wonder if that includes many of the burned areas in the Ely District wild horses were removed from back in 2006 to "protect the range"?

Notice it doesn’t say “BLM to open areas for grazing” (though in reality, that IS who has the last say in the matter) but it does disclose the power of NDOW in Nevada.

After all, that’s how NDOW’s Lincoln County Elk Management Plan slid through without any public consultation or legally required NEPA review (BLM approved the plan under a “Categorical Exclusion”, which allows them to circumvent any sort of analysis or public reporting on the project), even though elk - at least at that time before BLM recently zeroed out the 1.6 million acres for wild horse use – would out number wild horses in the area by a ratio of 3-1. Today, this disparity would climb even higher….

The article also implies what wild horse and burro advocates have known for years; many BLM'ers aren’t really doing much monitoring of resources, are they? Based on my own experience, NDOW range reports are often used to tell BLM what is happening on the range (it’s one of the reason’s why some of the Ely District’s livestock grazing authorizations repeatedly reference “wild horses” as “feral horses” as BLM just copy and pastes what NDOW reports).

Yes, the same NDOW who;

*Makes money off of increasing big game hunting tags while trying not to piss off the local ranchers too much to increase their grip on the resources,

*Oversaw the "managment" of the only riparian area in the Rattlesnake Wild Horse Herd Management Area BLM reported in 2006 that elk had been causing extensive damage too since 2002 including preventing rangeland recovery from wildfire damage,

With only BLM on the side of wild horse and burro preservation (well, that and the law), notice how the article reports the Cattlemen’s Association hopes to get some portions of the lawsuit transferred to Nevada Courts instead?

You guys are doing a terrific job of getting the information out there. A great resource. Thanks much. My next book is The Soul of a Mustang: Life Lessons from a Wild Horse. It gets deeply into the shambles the BLM's "illegal" program is in. There's a taste of this in my recent article: Wild Horses are Very Much Indigenous and Native to the Western United States: http://thesoulofahorse.com/blog/contrary-to-what-some-are-saying-in-the-media-wild-horses-are-very-much-indigenous-and-native-to-the-western-united-states/

I spoke with the Ely PR guy the other day in regards to these removals, and he made a telling slip of the tounge when he refered to the BLMs Wild Horse & Burro Program as a "sub-activity." I asked him to explain what he meant by that and he couldnt tell me. I asked him if their were any other "sub-activities" that the BLM engaged in, and again, he couldnt tell me, but he most certainly did alot alot of uttering, muttering and stuttering for a seasoned PR man.

If the BLM is truely "the only friend" of the wild ones, may God help them.

Online Marketing of your brand

Hello. This post is likeable, and your blog is very interesting, congratulations :-).
Samantha
Best Affordable Security Systems Suitable for Renters and Apartments, Business and RV