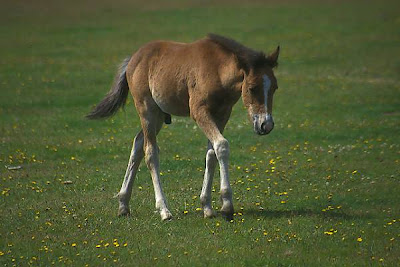 “Those who cannot remember the past
are condemned to repeat it”
George Santayana
The Life of Reason, Vol. 1,
Reason in Common Sense
Next week, BLM will begin the largest removal operations of the Pryor Mountain wild horses to occur in over a decade and as usual, they have cited the current population of roughly 200 wild horses as causing “range deterioration, soil erosion and simultaneously being in danger of “starving” in the future”, to paraphrase their basic reasoning - despite current reports of thriving, healthy horses found throughout the area.

Of course, BLM also leans on the “allowable” non-genetically viable population level set by authorized officers acting as representatives for Obama’s “CHANGE”: our completely unresponsive Secretary of the Interior, Ken Salazar and recently appointed BLM Director, Bob Abbey, who has already been found passing the public protest buck right back to the Montana Field Office leading the charge against both the general citizenry and our federally protected wild horses.

Over the months leading up to what BLM continues to cite as the inevitable culling of the Pryor Mountain herd, I have been reading a wide variety of subject matter regarding the BLM's analysis, documents and even some history of the most famous herd in America.

As a result, I thought a quick trivia question was in order as we continue to barrel down the culling of Cloud and his newly scheduled life as a "Sale Authority" commodity.

Can anyone identify WHERE the following statement and quote came from:

“We are talking two hundred horses that are doing fine up there right now” [and] “Those are the horses we want to see stay there….”

Is it from BLMs current proposal? Or is it from something perhaps a little older….

While it seems like it's a darn close reproduction of what is being said today, these excerpts were actually taken from the oldest and most famous wild horse book ever written, “America’s Last Wild Horses” by Hope Ryden, Chapter 30. The Pryor Mountain Controversy, first published in 1970.

To read through it today is a surreal adventure as both past and current events blur into one time line, making it hard to distinguish between “then” and “now” as BLM continues to use the exact same excuses and justifications to continue the assault on this ancient herd - just as they did in 1968.

Reading through The Pryor Mountain Controversy, Ms. Ryden expertly recounts all the politics, events and public involvement that led to the Secretary of the Interior finally declaring the Pryor Mountain wild horses and their habitat as a “legally protected wild horse range” – before the Wild Free-Roaming Horse and Burro Act had even been drafted in the halls of Congress.

The history of how these amazing animals finally became protected is one of high drama, multiple intrigues and political persuasions from every camp, both local and national, and well worth the read.

While I was actually dumbfounded by many of the politics being played out (merely because absolutely nothing seems to have changed!), complete with a cast of the usual suspects, Montana’s Livestock Association and Montana’s Fish & Game Department, who adamantly claimed the Pryor Mountain wild horses were responsible for declining mule deer population in the area (with a plan already in the works to replace the Pryor horses with bighorn sheep), what struck me as most significant was how the truth was exposed regarding claims of deteriorating range conditions and soil erosion being caused by the 200 wild horses in the area.

It would seem that, while “deteriorated range conditions” was an actual fact, a special Committee comprised of appointees hand picked by DOI Secretary Udall himself and assembled to study the feasibilility of preserving the Pryor Mountain wild horses found that, the degradation had actually occurred some 50-100 years earlier due to domestic sheep grazing.

No links could be found to those “deteriorated range conditions” being caused by the Pryor Mountain wild horses and all documentation BLM had used to justify their prior decision to remove them was found to be false, fabricated, or merely hearsay being presented “as fact”. (And this independent range review and its conclusions are still part of the public record!)

Furthermore, the thriving, healthy wild horse populations of yesteryear was used and cited by the Committee as ample evidence that the area could support 200 wild horses without any danger of “starvation” or causing rangeland damage that would effect other wildlife in the area.

So, one must ask oneself –

And if those same independent reviews determined the damage had already been done a century ago, how will the Pryor Mountain wild horses EVER be free from the continued claims by BLM and other vested interests that, “current photos showing degraded rangelands are being caused by "excessive" wild horses"?

!PLEASE!
Take a moment out and protest the continued attack on America’s Mustangs & Burros by speaking out against the unwarranted and unsupported removals
of the Pryor Mountain wild horses!