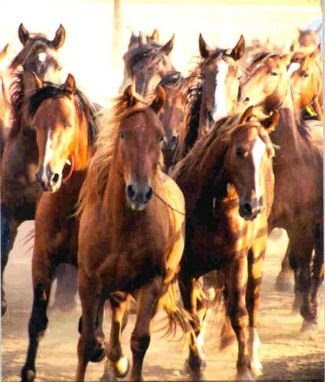 On June 30th, 2008, the Bureau of Land Management (BLM) announced the Wild Horse and Burro Program had reached a crisis point of epic proportions.

As a result of removing over 75,000 wild horses and burros from public lands since 2001, BLM now claims the cost of holding 32,000 warehoused animals has exceeded the programs financial limits and something must be done.

According to BLM, only three viable options now exist:
*Allow BLM to grant Instant Title to adopters, almost a guaranteed slaughterhouse end.
*Allow BLM to shoot tens of thousands of wild horses both on and off the range.
*Give BLM more money to manage the Wild Horse and Burro Program.

While BLM is attempting to focus the public’s attention on “what” should be done about BLMs reported crisis of “excess” wild horses and burros, the first question the public should really be asking is, does BLMs data back up their claims?

BLMs own data fails to support their population claims by a large margin and evidence strongly suggests the agency has removed 11,000-14,000 more wild horses and burros than was necessary. In other words, BLMs own statistics point to the conclusion that the current “crisis” has been manufactured.

American Herds offers this timely report, “Americas Mustangs & Burros: What’s Left, The High Costs of Miscalculating and Will They Survive?”, a culmination of two years of research into a variety of BLM proposals, policies and management, both in the wild horse and burro program as well as other multiple uses of public lands.

This comprehensive overview provides a wide variety of case studies, documents, statistics and data, most taken from BLMs own reports, as well as a brief history of the abuse and malfeasance over the years in the wild horse and burro program, some alleged, some proven, and where it stands today.

Several versions have been created for easy access, portability and to send as attachments for anyone who wants to learn more about what has really been happening to Americas Mustangs and Burros.

While BLM maintains options are limited, now narrowed to merely choosing which way the American public wants to see wild horses and burros die unless BLM is given more money, another option exists, though it is hardly one BLM will recommend, and that is to examine the validity of BLMs claims and investigate their management.

Research and analysis based on BLMs own statistics has shown their current population reports or population goals cannot be valid. As a result, the simplest solution to the current “crisis” is to return the wild horses and burros back to the range, as statistics reveal they should have never been captured and warehoused in the first place.

To learn more, click the links below and wait for them to download as some files are quite large. Giving it a "test run" found some gliches in the links but they were ususally fixed by clicking back and then retrying. Will continue working to fix.

Americas Mustangs & Burros
What's Left, The High Cost of Miscalculating
and Will They Survive?
by C.R.MacDonald
July 2008

Part III ~ Will They Survive?

Appendix IX
Posted by Preserve The Herds at 10:19 AM

Your reliance on a Knapster report (again), makes me question your credibility as well. Here is what I have learned by doing some reading and making some telephone calls: #1 - Don Glenn has not spent 30 years in Washington, DC as reported; he spent several years as the manager for Wyoming's horse program and as a range manager before that; #2 - BLM set the proper number of wild horses for the Nevada Wild Horse Range based on the available food and water in July 2004 and while there is food and water to support 300-500 animals, one can reasonably expect a shortage of both when numbers have been 2-4 times that as has been the case for the last several years; #3 - according to BLM who monitored the forage utilization prior to the latest emergency removal, use by wild horses within a 3-5 mile radius of the available water was heavy-severe. If we want horses on the Range for hundreds of years to come, guess what? The range has to be managed and that means managing for the proper number of horses in balance with the food and water available. And who on earth is naive enough to think that just because there is 1.3 million acres on the range that all of it is accessible by horses? For the record, much of the Range is not usable by horses i.e. too steep, too rocky, too timbered for use. So much for the Knapster report.