In 2005, the Government Accountability Office (GAO) released a report on the public lands livestock grazing program titled, “LIVESTOCK GRAZING: Federal Expenditures and Receipts Vary, Depending on the Agency and the Purpose of the Fee Charged.” (GAO-05-869).

After a thorough examination of federal expenditures on “our” federal grazing programs, the GAO found some very interesting facts, one of which was from the National Agricultural Statistics Service that reported:

Since 1984, the size of cattle now grazing public lands has increased by 23% per head. Instead of weighing approximately 1,050 pounds like they use too, now they are weighing in at 1,242 lbs. but government agencies are still charging fees that only cover feeding a 1,000 lb. animal.
It’s another taxpayer sponsored welfare ranching deal called
“Buy four, get one free”! 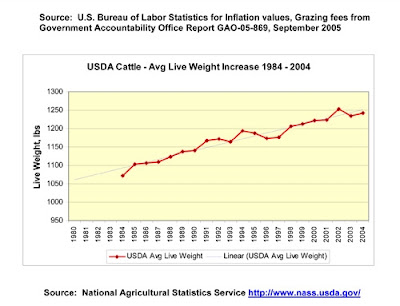 The GAO report also stated that:

“…10 federal agencies manage more than 22.6 million AUMs (Animal Unit Months) on about 235 million acres of federal lands for grazing and land management in fiscal year 2004. Of this total, the Department of the Interior’s Bureau of Land Management (BLM) and the U.S. Department of Agriculture’s Forest Service managed more than 98 percent of the lands used for grazing.”

The Animal Welfare Institute has stated an estimated 8 million livestock are authorized to graze public lands in 11 western states with the vast majority of all BLM administered lands (92%) being leased for livestock grazing.

So while BLM is wringing their hands as to the financial costs of the Wild Horse and Burro Program with only slaughter, genocide or trying to guilt the American taxpayer into picking up the adoption tab to “save” our wild horses and burros from BLMs “managed deaths”, how about this alternative?

Since BLM and other federal agencies are giving away “free forage” to every fifth cow on public lands, how about removing 1 out of every 5 cows and giving that free, unaccounted for, unbilled and unpaid forage now being used anyway to our wild horses and burros instead!

If BLM and US Forest Service had authorized 13.7 million Animal Unit Months (AUMS) of forage for livestock consumption in 2004, this means that approximately 3.4 million MORE AUMs is being consumed by the “super sized cows” grazing public lands these days than is on any record book or being paid for (not including the calves) by our already bloated welfare ranching system.

Furthermore, according to the San Jose Mercury News, which ran an in-depth piece in 1999 on livestock grazing on BLM lands, “The top 10 percent of grazing-permit holders control a striking 65 percent of all livestock on Bureau property. The largest livestock operator on BLM lands is John Simplot, who is listed on the Forbes 400 list and supplies half the French fries to McDonald’s restaurants in this country. Other permit holders include the Hilton Family Trust, which owns the Hilton hotel chain, brewery giant Anheuser-Busch, Inc. and the Agri Beef Company—hence the term 'corporate cowboys.' The majority of taxpayer subsidies go directly into the pockets of large corporations and millionaires, not small family ranchers." (1)
According to BLM, there are currently 33,000 captured wild horses and burros being warehoused in holding facilities (though today a more appropriate description would be Death Camps), which would require 396k AUMs to feed on public lands. Removing every “fifth” cow now hidden in the system would allow every wild horse and burro currently headed to the chopping block to eat for free ~ eight and a half times over ~ without requiring any changes to “authorized use” of either livestock or wild horse and burro populations!

The American taxpayer could finally receive full payment of $1.35 per month for the forage consumption that is really being used without providing any MORE freebies to the public lands ranching industry AND they could be spared the expense of warehousing or killing our wild heritage. 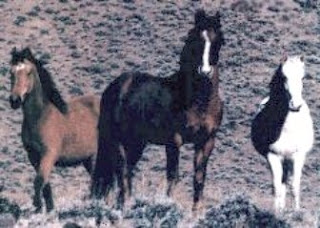 (1) Animal Welfare Institute, Managing For Extinction-Shortcomings of the Bureau of Land Management Wild Horse and Burro Program.
Posted by Preserve The Herds at 2:30 PM