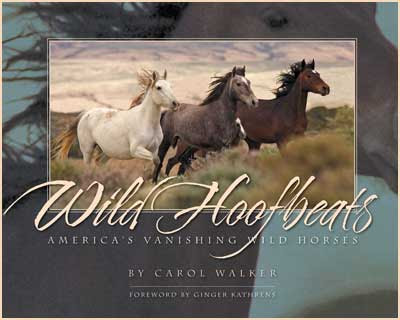 Wild Hoofbeats – America’s Vanishing Wild Horses
by Carol J. Walker
Forward by Ginger Kathrens
I have often thought one of the great pitfalls of technology is filming the natural world, whether through still photos or live action footage. Though this may sound strange as film has given the gift of transporting us into amazing worlds we’d most likely never see without it, I’ve always felt it insidiously caused a great disservice to both us and to Mother Nature herself.

Why? Because no matter how beautiful the images may be, there is one thing film just cannot do ~ it fails to fully transmit the absolute power that radiates from being in the presence of the natural world.

This living “essence”, which can only truly be felt through personal experience, is reduced to a two dimensional reality, whether on paper or on screen, and too often becomes the substitute for our relationship with the true nature of the world we live in. The sheer enormity of the animals is lost, the crackling energy of their wildness is diluted and the vastness of their homescapes is instead brought to us in boxes - tamed, controlled, safe and “managed”.

With that said, Carol Walker’s “Wild Hoofbeats – America’s Vanishing Wild Horses” is as close as it is ever going to get without actually being there.

For those that appreciate fine art photography, they will not be disappointed as it is absolutely packed with stunning photographs of the highest caliber; beautiful, rich, vivid, raw, tender, and intimate and just on this basis alone, it stands apart as a monumental tribute to the magnificence and beauty of the American Wild Horse.

Yet Wild Hoofbeats delivers much more than just beautiful images as it often transcends ordinary boundaries, leaving no question that you are in the presence of truly vital wild animals of profound importance.

For years, Carol photographed the wild horses of Wyoming and made the Adobe Town herds the focus of this incredible work of artistry. Visiting them during all seasons throughout the years, she shares with us her growing knowledge of each band, each unique family member, the bonds that can take them a lifetime to create as well as a brief history of the various herds highlighted throughout her travels.

From the time she “discovers them”, she follows them through their natural cycles on the great Red Desert plains, through the helicopter driving that rounds them up, shatters their families, their freedom and their lives, and even goes so far as to visit one of BLMs long-term holding facilities, where most of America’s wild horses have now been shipped too, in efforts to try and locate one of the now captured wild stallions whose riveting presence had so moved her to begin following him and his band.

As each page is turned, bringing one deeper into the heart of America’s wild horses with its electrifying visual connections as to why these majestic creatures were declared national icons and living symbols of America’s spirit, freedom and independence, the elegant and profound narration provides stark contrast as it simultaneously sums up the simple truths behind both the tragedy and the travesty that has been unfolding in relative obscurity to our vanishing wild herds.

Educational, beautiful and enlightening, “Wild Hoofbeats – America’s Vanishing Wild Horses” is an instant classic for those who already know the value of the distinctly American wild horse, but more importantly - it is a must have for those who don’t - as it powerfully communicates what is truly being lost or more accurately, what is being taken from us.

Ultimately, it reaches into the depth of the soul and as gratifying as it is visually, it leaves a penetrating sense of sadness through its crystal clear revelations - something precious and irreplaceable is being destroyed right before our very eyes and unless people wake up and speak up, it’s spectacular photography may only serve future generations by historically documenting what “use to be”.

Highly recommended, very reasonably priced, there is a 2009 Wild Hoofbeats Calendar with over 70 images available as well.
For more information or how to order
Click Here or go to
www.wildhoofbeats.com
10% of all proceeds will go to the Cloud Foundation, a 501c organization dedicated to the preservation of wild horses on our public lands and the protection of Cloud’s herd in the Arrowhead Mountains of Montana.
Posted by Preserve The Herds at 5:26 PM