Senator Feinstein: A Woman of Her Word? 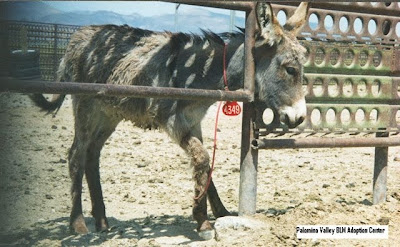 Photo courtesy of Wild Horse Spirit, Ltd.
Despite the long list of undisputed and well-worn complaints regarding BLMs management of the Wild Horse and Burro Program, last week BLM scheduled the removal of a handful of wild burros at Owl Hole Springs with more round ups scheduled this week for a few isolated now “zeroed out” burros still clinging to their free-roaming lives within the Panamint, Slate and Centennial Herd Areas in California.

On August 19th, at the legally required public hearing held in Barstow, CA regarding BLMs plans to remove these burros, it was suggested the only hope they now had was through contacting California Senator Feinstein and urging her to intercede on the burros behalf.

As a result, volunteer for California based Wild Burro Rescue Linda Lee has been in contact with Chris Carrillo of Senator Feinstein Los Angeles office this past month in efforts to urge Feinstein to finally take action.

According to Ms. Lee, “As the author of the California Desert Protection Act, Senator Feinstein stated in her 2005 letter to then DOI Secretary Gale Norton that she strongly believed wild burros were a part of the heritage of the Mojave Desert - having been present in this area since CA's Gold Rush. Senator Feinstein went on to say that she opposed any efforts to remove these wild burros from their legal Herd Areas and that she wanted to be immediately informed of any removal plans".

"California citizens are asking Senator Feinstein to live up to the words stated in her 2005 letter and put an immediate stop to the BLM's roundups of California's last remaining heritage herds.”

In response, I submitted the following letter to Senator Feinstein’s office today urging her immediate intercession in this matter. In order to help raise public awareness of the critical conditions facing California’s now forgotten wild burro herds, I am reprinting it here.

There is also contact information for Senator Feinstein and Senator Boxer listed at the bottom of this post if you would like to add your own voice to the growing demand for our representatives to begin stepping up to the plate by honoring both law and intent of the Wild Free-Roaming Horse and Burro Act before it's too late!

As a life long resident of both California and Nevada who has watched our wild burro herds disappear, I am writing today to implore you to begin honoring promises made to the American people given through the Wild Free-Roaming Horse and Burro Act - as well as the promise given by yourself four long years ago - regarding your support for protecting and preserving California’s historic wild burros herds.

Wild burros were once considered an icon of the American West with California taking the lead by declaring them “California’s Mascot”, as it was once home to the largest wild burro population in the country. Even prior to the passage of the 1971 Act, California had initiated state protections for wild burros through California Fish & Game Code 4600, which still stands today.

At the time of passage of the California Desert Conservation Area Plan (1980), the Bureau of Land Management (BLM) acknowledged there were 19 recognized Herd Management Areas that could be managed for wild burros within “the natural thriving ecological balance” and 14 were officially designated for that purpose within the Conservation Area alone. The combined BLM approved “appropriate management levels” totaled 2,747 wild burros with their available habitat totaling approximately 3,500,00 million acres.

Today, this same area has less than 300,000 acres of habitat remaining and only 229 or less wild burros are now considered “appropriate” – a 90% reduction in both habitat and populations - despite their supposed federal and state protected status.

Throughout the entire state of California, there are now only 3 remaining wild burro herds, none of which are being managed for genetically viable populations. The entire combined “allowed” population issued by BLM for all wild burros in the State of California is merely 345 animals (this number accounts for the fact that BLM is currently padding California’s AML by adding populations into their “allowed” numbers that no longer exist due to removals) with over three million acres of habitat now completely eliminated, or seventy-five percent of their former ranges now gone.

And the round ups continue….

On this clear and present course for “managed extinction”, how much lower do wild burro populations and their home ranges have to be gutted before someone begins to honor both law and the promises made to the American people to insure their protection and preservation?

Right now, the BLM is planning on conducting removals yet again to sweep tiny handfuls of isolated burro herds from lands once dedicated for the purpose of including them within the natural system of public lands.

Yet, as can be seen from California’s abysmal statistics, no amount of public involvement has been successful in halting the BLM and various agencies in their conspiracies and achievement of decimating the largest wild burro population in the nation – these precious heritage herds now lost to us forever.

And so, with the public having no reasonable recourse left, as all our pleas for either justice or mercy continue to fall on deaf ears, I turn to you in desperate hopes that you will honor your former commitment and keep your word to protect and preserve California’s remaining burros by acting as true representative of both people and law.
PLEASE PICK UP THE PHONE NOW AND CALL BLM TO DEMAND AN IMMEDIATE HALT ON ANY FURTHER ROUND UPS OF CALIFORNIA’S WILD BURROS!
Contact: California BLM Chief Resource Manager
Tom Pogacnik (916) 978-4637

It is their last hope and chance.
As BLM continues, unabated, to implement the same strategic management plans of almost 40 years aimed at circumventing lawful protection of both herds and habitat alike, please show your support for reversing this long standing trend by becoming a co-sponsor of Senate Bill S. 1579; renew your commitment for both the protection and preservation of these, America’s historically distinct free-roaming herds

Thank you for your time and immediate attention to this matter.

It's incredible that our government stands by and allows the BLM to operate like a renegade agency, above the law, and beyond the reach of our Senators.

Where are the sharp, stand-up heroes in government who will shun the dirty hands of special interests like oil drilling, mining and big game hunting which force the wild herds off their lands?

When will they ride to the rescue of the wild herds flying under the banner of honor and right, and take up the cause that longtime wild horse and burro have shouldered for far too long.

When will they rein in the BLM?

And, when will it be too late?