From the Desk of Equine Welfare Alliance....

CHICAGO, (EWA) – Wild horse and burro advocates from across the country plan on greeting President Obama on February 18 in Las Vegas with a protest of the Bureau of Land Management’s (BLM) mismanagement of the Wild Horse and Burro program and total disregard of the 1971 law protecting the wild horses and burros on their public lands.

The highly criticized Calico Complex round-up in Nevada that concluded on February 5 resulted in the death of 48 wild horses and the loss of 30 unborn foals. The death toll continues to climb from injuries resulting from the round-up as well as health issues from diets, such as Alfalfa hay that wreaks havoc on wild horses unaccustomed to a rich diet after feeding a lifetime on desert grasses.

The Calico round-up is being called one of the most deadly round-ups in history. Video footage shows foals being chased by a Cattoor helicopter as they tried to keep up with their mothers fleeing during the stampede. Two baby horses literally later had their hooves fall off, dying a dreadfully painful death at BLM's hands. The horses were run over miles of rough terrain in the dead of winter.

According to the BLM, the round-ups are for the welfare of the horses. They claim the horses are starving but the photos and footage tell a different story. They claim the few thousand horses remaining free roaming are ruining the ranges but the GAO reports reflect the millions of privately owned livestock being subsidized by tax payers are the cause of the range degradation.

Although the wild horses and burros belong to the American public and the BLM speaks of transparency by the bureau, humane observers had very limited access at the round-up and are being kept away from the Fallon Facility where the horses are being held.

George Knapp from KLAS TV I Team recently aired two reports, BLM Wraps Up Huge Wild Horse Roundup and Wild Horses Forced into a Stampede of Death, which are an eye-opener to those unfamiliar with the BLM round-ups.

The Equine Welfare Alliance, The Cloud Foundation and In Defense of Animals (IDA) encourages concerned Americans to join the protest on February 18 at 1:30 at the Lloyd D. George Federal Courthouse, 333 S. Las Vegas Building, Las Vegas, NV. Expected speakers at the protest are Craig Downer, wildlife ecologist and humane observer at the Calico round-up, Neda DeMayo, founder and CEO of Return to Freedom, Gina Greisen, president of Nevada Voters for Animals and Arlene Gawne, wildlife artist. Additional information can be obtained from Arlene Gawne at 702.277.1313 or artistfromafrica@hotmail.com

As second protest, Truth Rally, will be held on February 20 in front of the Legislative Building on North Carson Street, U.S. Highway 395 in the state capitol of Carson City, NV and is sponsored by The Alliance of Wild Horse Advocates. Information is available from Bonnie Matton, Wild Horse Preservation League at 775.220.6806 or Mattonco@prodigy.net 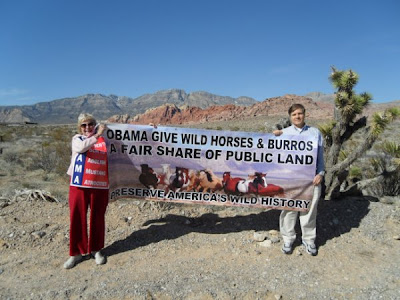 "Valentine Gift to BLM"
Protestors outside of the BLM entrance to Red Rock Canyon near Las Vegas, NV , 2/14/10.
Courtesy of Arlene Gawne

The Equine Welfare Alliance is a dues free, umbrella organization with over 95 member organizations. The organization focuses its efforts on the welfare of all equines and the preservation of wild equids.
www.equinewelfarealliance.org
Posted by Preserve The Herds at 11:55 AM

GO you guys! Let our President know what's going happening on his watch!

I only wish I could be there!