The following press release was sent out on 7/07/10 by The Equine Welfare Alliance, a dues free, umbrella organization with over 100 member organizations. The organization focuses its efforts on the welfare of all equines and the preservation of wild equids and Animal Law Coalition, a coalition of pet owners and rescuers, advocates, attorneys, law students, veterinarians, shelter workers, decisionmakers, and other citizens, that advocates for the rights of animals to live and live free of cruelty and neglect.

CHICAGO, (EWA) – On June 23, 2010, the Bureau of Land Management (BLM) Elko District office buried on its website a notice that approximately 175 “abandoned, domestic, estray” horses located within Pilot Valley, NV, were scheduled for impoundment beginning June 25. The round up was expected to take 3 - 4 days with corrals set up on nearby private land owned by Simplot Land and Livestock until the horses could be transported and placed under the jurisdiction of the State of Nevada.

Nevada authorities plan to sell the horses rounded up by the BLM at auction on July 10. The horses will be available to all buyers and are therefore at risk of ending up at slaughterhouses in Mexico or Canada.

But serious questions are being raised as to whether these horses are, in fact, estray or feral. After investigating the history and location of the Pilot Valley area, wild horse advocates found Pilot Valley sits at the edge of a known wild horse territory called the Toano Wild Horse Herd Area. BLM wanted to make this area "horse free" in 1993, but according to BLM's Program statistics, approximately 168 wild horses were reported as still residing in the Toano range as of last year.

The proximity and near identical number of horses has lead mustang advocates to speculate that the horses the BLM rounded up as estray might actually be wild horses from the Toano range that are entitled to roam free under federal protection. How, they ask, does BLM know these horses are estray or feral and not wild horses?

Suspicions are further fueled by the unusual suddenness of the roundup, just 48 hours after notice of the removal was posted. "These horses will go from free roaming to sold in fifteen days or less with tight security at the facilities where they are now being held," said Valerie James Patton, Vice President of Equine Welfare Alliance (EWA).

"Even BLM's own news release stated those horses had been there a long time, long enough to grow in size", Patton added. "So now the question becomes, how long is a long time? Since 1993 when BLM filed papers to zero out the Toano Herd Area?"

“Given the long history of abuse and impropriety that has characterized the Wild Horse & Burro Program, I have to ask,” said EWA’s Vicki Tobin, “Did BLM openly remove federally protected wild horses from the range to sell them for slaughter because they have no fear of being held accountable? It would be illegal for BLM to round up wild horses declaring them estray and turn them over to the State. The BLM is prohibited from sending wild horses to slaughter, whether directly or indirectly.”

While questions have begun surfacing as to the true status of the Pilot Valley horses, Laura Allen of Animal Law Coalition and EWA points out, "Before selling estray horses, the state is supposed to use reasonable diligence to try to find the owner including placing a notice about the estray with a full description in the local paper. BLM's news release states these are domestic estray horses abandoned by local residents. So why isn’t an effort being made to find the local owners and hold them responsible to care for these horses instead of rushing these horses off for instant sale?"

"Another concern is, there are very specific definitions as to how to determine estray and feral livestock from federally protected wild horses and so far, the only thing we've seen is a take-our-word-for-it position from officials", she said.

“The Department of Interior has an almost unblemished reputation as a consistent source of scandal, mismanagement and corruption,” explained EWA president John Holland, “starting with Teapot Dome in the Harding Administration through to the current disaster in the Gulf. So when things look this suspicious, questions are bound to arise.”

In fairness to the BLM, EWA contacted them on July 1, to ask how they determined the horses were estray and is still awaiting a response.

EWA calls for a federal investigation to find out how BLM determined these horses are not the federally protected wild horses from the Toano range, which should include genetic testing and an accounting of the Toano wild horses.

What evidence indicates the Pilot Valley estray horses may instead
be federally protected wild horses from the Toano range?
Click Here to view.

The following additional information was supplied by Willis Lamm of Alliance of Wild Horse Advocates regarding current rescue efforts for these horses now being made by Jill Starr of Lifesaver’s Wild Horse Rescue.

Jill Starr has organized a rather comprehensive rescue effort for the 174 Pilot Valley horses that BLM rounded up late last month and turned over to the Nevada Department of Agriculture to sell off at a livestock sale in Fallon on July 10th. 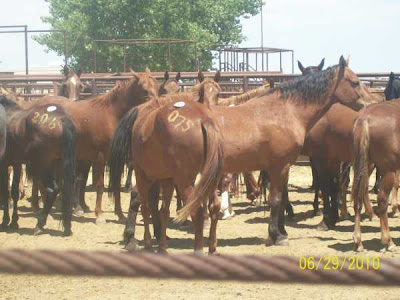 Photo of horses slated for auction on Saturday, July 10, 2010
Courtesy of Willis Lamm and AOWHA
Advocates are concerned that these horses were not privately owned as BLM is claiming, but actually may have strayed off one of the nearby BLM wild horse herd areas and therefore should be protected from going to the kill buyers. Starr's Lifesavers Wild Horse Rescue, with assistance from several other organizations, will bid against the kill buyers for these horses and Lifesavers has a local facility ready to receive them.

This effort is not intended to exclude any qualified and caring private individuals from acquiring some of these horses.
Complete details are posted in the
Alliance of Wild Horse Advocates' War Room at -
http://www.aowha.org/activities/pilot_valley_rescue01.html
Posted by Preserve The Herds at 1:08 PM