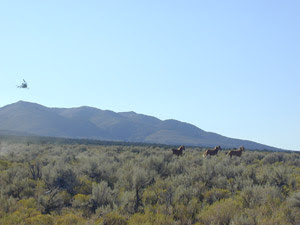 The second half of a two part wild horse cleansing operation was completed on September 29, 2007 in the BLM Ely District where 68 wild horses were removed in and around the Moriah Herd Management Area (HMA), leaving an estimated 20 wild horses remaining. (1)

In 2004, BLM reported the Moriah HMA encompassed 55,050 acres but through the planning process, removed 11,675 acres of wild horse habitat from any further use. (3)

Wonder how many key water sources were included in this withdrawal?

Prior to the August 2004 removals, an estimated 300 wild horses roamed the Moriah HMA but BLM decimated the population, leaving a mere 20 wild equids exempt from capture, containment and what is commonly referred to as the adoption pipeline for the “excess” wild horses and burros BLM removes. (4)

While BLMs forage allocations for the Moriah wild horses peak at 348 AUMs, an estimated 4,546 AUMs have been generously doled out for livestock grazing in the HMA area. (5)

The first part of these cleansing operations occurred the beginning of August in the Jakes Wash HMA, where every horse BLM could gather was removed. As is a common pattern with removal operations, BLM gathered less wild horses than they projected but removed more than they originally planned.

Jakes Wash has a very active removal history; records for July 2001 indicate 98 wild horses were removed, followed by an additional 77 in February 2003, July 2004 saw 49 more taken and then the current removals of 97 this past August. (8) This removal history was not made fully available in the June wild horse capture EAs, only in the just released grazing renewal for the White Rivers Ranch and Toms Plain Allotment.

Though BLM is required to “manage” for self-sustaining populations of wild horses, the Jakes Wash wild horses are only allowed 252 AUMs of forage while livestock operations affecting the HMA have been issued 15,725 AUMs – wild horses are given less than 2% of the forage available in the area. (9)

To help illustrate this point, BLM just approved the White River Ranches Term Permit Renewal for the Tom Plains Allotment of which 50% falls within the Jakes Wash HMA. A total of 6,036 AUMs was allocated for cattle, which translates into enough to forage to feed 503 cattle annually. (10)

The removals of the Jakes Wash Herd and their “management” was legally appealed through the Interior Board of Land Appeals (IBLA) after the final decision was issued for their removals, but as always, any public protest automatically becomes a “Moot Point” due to BLM timing their decisions that allow the wild horse and burro populations to be whisked away faster than IBLA can respond to the public protests.

This lack of self-sustaining populations is of little consequence to BLM as managers stated in the gather proposal that chances were very high of both these “protected habitats” being completely zeroed out in the new 2007 Resource Management Plans, soon to be released some time this month.

As a result, BLM openly admitted in the Preliminary Environmental Assessment that the only wild horses left in both HMAs after this most recent cleansing would be the very old or those they could not find. (11)

For BLM, this is a win/win situation because even if there are public protests lodged against the zeroing out of the Moriah and Jakes Wash HMAs during the Resource Management Plan Final Decision, the handful of wild horses now remaining will be too old, too weak, and too few to do anything more than just die off and disappear.

It also gives BLM the advantage of another popular stratagem employed in their wild horse “management” - legally removing wild horses from the nearby Monte Cristo HMA.

Posted by Preserve The Herds at 3:17 PM