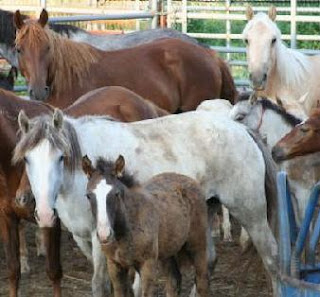 That’s right. Wyoming’s White Mountain and Little Colorado wild horse roundup party has just been cancelled due to a sold out show.

The Removals, due to appear a week after the public comment period closed, denied the wild horses access to the event because there is no longer any space available in the overflowing containment centers now busting at the seams.

With no more tickets for sale, BLM tried to negotiate a V.I.P. tour for the wild horses, which included backstage passes, food, drink, medical treatment and “party buses” to the arenas.

Though disappointment was expressed that the wild horses were unable to attend the November festival, it is hoped space will become available by July 2008, when the Removals are next tentatively scheduled to appear.

With such long-time favorites as, “Just One More Cow Please”, “Thriving Ecological Balance” “Riparian Rap”, “Givin Your Land Away” and the ever popular, “I’m Over AML”, the Removals earned overwhelming Congressional support that set them on a whirlwind tour in 2001, where over 70,000 wild horses and burros have since attended the shows. (1)

Led by MCs Cook and Cattoor, the Removals provide a dazzling display of equine acrobatics as wild horses plunge down mountain sides, barrel through streams, and test their endurance to see which of them can outrun the hovering helicopters roaring over their heads.

The Removals Tour is not without controversy however, with much of the public expressing outrage at the exorbitant prices the Ticket Masters are charging for wild horses and burros to attend.

Initial cost range from $211 to $460 per capture ticket sold while daily expenses vary anywhere from $2.10 to $13.99 for each day a wild horse spends at the holding facilities after-party. (2)

Guess that’s just difference between livestock staying at home instead of gallivanting around the countryside like the wild horses and burros do, being chased into big city dreams of stardom, prancing for gawking crowds, consuming rich foods and looking for small pens to retire in.

However, supporters of the Removals think the cost is worth it exclaiming, “Wild horses and burros are still just too wild!” They hope that after attending the shows, wild horses and burros will finally settle down and become more domestic or give something back to the community by volunteering themselves to Belgium, France, Japan and Mexico instead of just tearing up the home ranges with their wild animal antics.

For now, the White Mountain and Little Colorado wild horses will miss their chance to join the fun but BLM promises they won’t have to wait long before being given another opportunity to be chased into big city dreams and all night mares.

Note:
This story was written before yesterdays newspapers announced the cancellation of the Removals due to a shift in funding that has caused the Wyoming Governor to “have a cow” because Wyomings wild horse Removals have been postponed for Nevada wild horse Removals.

Yet, according to a comment posted on Saturday in the article titled, Land of the Lawless, the reason for canceling the Removals was overflowing containment centers as per BLM Wild Horse & Burro Specialist Jay D’Ewart, who is responsible for overseeing the White Mountain and Little Colorado removal operations.

While this story was just too fun to discard, it also raises the question: which story is BLM telling the public that’s the truth?

Perhaps BLM doesn’t want to make a national announcement that holding facilities and containment centers are so full from prior attendance of the Removals that they can’t cram anymore in or perhaps the Wyoming WH&B Specialist is just out of the loop…..
Photo taken from BLMs Internet Adoption Website
(1) Removal numbers taken from BLM National Adoption and Removal Statistics, Fiscal Years 2001-2006 and BLM Gather Reports October 1through April 1, 2007.
(2) Based on figures provided in An Economic Analysis of Alternative Fertility Control and Associated Management Techniques for Three BLM Wild Horse Herds by John M. Bartholow. Cost estimates were taken from budget planning spreadsheet supplied by Linda Coates-Markle, BLM/MT (4/29/2003) as interpreted by Don Glenn, BLM/DC (6/17/2003) and Lili Thomas, BLM/NV (9/22/2003).
(3) BLM Wild Horse and Burro Fact Sheet www.blm.gov

Posted by Preserve The Herds at 2:12 AM

I just read about this in today's The Horse.com headlines and I'm heart sick. "Sold without limitation" indeed, courtesy of Conrad Burns.

The BLM will continue to publish their forked-tongue stories and "manage" America's Herds above the law until 100 bloggers become 100,000,000 voices on capital hill. Until then, please keep blogging!

I remember the Trail of Tears. I now see a Trail of Blood across and beyond this land. No borders.