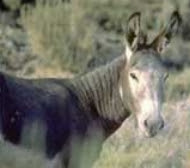 It was the brutally cruel and inhumane treatment of wild horses through a host of barbaric “solutions” such as mustanging, poisoning water holes, driving them off cliffs, and the bloody road to slaughter that sparked public protest to end this ugly historical chapter of the American West.

The Wild Free-Roaming Horse & Burro Act was suppose to close the door on these kinds of “on the range” kills and finally allow our animal brethren the freedom to live in peace after millenniums of domestication and service.

While supporters of the Act have often rallied against the hidden illegal slaughter and treatment of our now supposedly protected equines, the killing of America’s wild burros through “direct reductions programs” have often continued unabated through government agencies armed with the exclusively reserved right to put a bullet in our burros were they stood.

Congress charged the Secretaries of the Interior and Agriculture with the protection and preservation of our countries wild horses and burros as a response to the public's overwhelming love and desire to end their plight.

Despite this charge, the Secretaries have served at the pleasure of those who exploit our resources, not our laws or their intent, diligently working on ways to circumvent the political process and instead, exercising their authority to “legitimize” the corruption and corrosion of these mandates.

One of the many ways this was accomplished was through the institution of separate agency “missions” place under their jurisdiction that allowed national laws to be divided, segregated and ultimately usurped.

Enter National Park Service (NPS), established through the 1916 Organic Act under the mandate “to conserve the scenery and the natural and historic objects and the wildlife therein and to provide for the enjoyment of the same in such a manner as will leave them unimpaired for the enjoyment of future generations" - that use to cover wild horses and burros as evidenced by the honor they bestowed on the wild burros of the Grand Canyon and elsewhere across the Nation.

Yet new policies - not laws - aimed at promoting “other agendas” began to be instituted, until finally, the Secretary of the Interior successfully shirked their charge of protecting wild horses and burros and their habitat through a total reversal that allowed National Park Service and other agencies to literally shoot them by the thousands if they had the unfortunate luck to reside on the wrong side of the jurisdictional tracks.

It began, at least as far as we know of, with the National Park Services plan to shoot the 577 wild burros then living within the Grand Canyon that the Fund for Animals halted through negotiating their amazing airlift rescues.

In 1984, the China Lake Naval Weapons Center in California began to initiate a “direct reduction program” of 5,900 wild burros in the area. In the beginning, 649 wild burros were shot on the base under this management plan until their deaths were discovered by animal welfare groups who successfully lobbied again for the humane “live removals” of 864 more.

Over the course of the next four years, an additional 4,387 wild burros were then removed by “live captures” until their numbers totaled less than 200 and now “allowed the Naval Weapons Center to reintroduce the native ungulate, the Desert Bighorn Sheep.” (1)

Since 1975, the Sierra Club has also endorses the reductions of wild burros and horses and has developed an extensive policy regarding their “management” that includes: eliminating them from all national parks and monuments, all areas protected by the Antiquities Act, all federal and state lands where rare, endangered, threatened, or endemic species of flora or fauna exist, national recreation areas as well as “eliminating them from key wildlife habitat, including desert bighorn habitat of the American Southwest, from designated natural areas” and supports the “carefully regulated numbers to minimize conflict with wildlife, livestock, and other range values.”

According to Deanne Stillman’s article, The Last Burros of the Mojave Desert, from 1987 to 1994, National Park Service shot 400 burros in Death Valley, CA with plans to accelerate these direct reductions in 1994 when a status change placed Death Valley under NPS sole jurisdiction.

Even today, wild burros remain targets for “direct reductions” as only a few days ago, a news story reported at least 18 burros have recently been shot at Big Bend State Park in Texas to make room for the “native species of bighorn sheep”, who brought in almost $800k in raffle sales by those eager for a chance to hunt the horned ones now being touted as “the future” of management goals for Park.

In a scenario that has played out time and again, a thirty-five year veteran and Big Bends Park manager, Luis Armendariz, began investigations into the burro killings, which resulted in his superiors retaliating against him forcing his resignation on November 30, 2007.

For a glaring expose on what and how “direct reductions” of wild burros are being secretly carried out, visit American Wild Horse Preservation Campaign, Death of a Mojave National Preserve Burro by J. & K. Foster.

Posted by Preserve The Herds at 6:13 PM