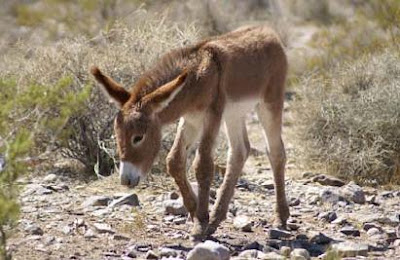 Wild burros were once considered both an icon and mascot of the American West.

The Grand Canyon in Arizona use to proudly showcase a statue of “Brighty the Burro” at its entrance in honor of the burros historic role in both pioneering and building our Nation.
Brighty, short for Bright Angel, was a real life wild burro who lived in the Canyon back at the turn of the 19th century and became the inspiration for the book Brighty: Of the Grand Canyon by Marguerite Henry as well as the 1967 Walt Disney movie tribute of the same name.

Today, Bright Angel’s memorial has been relegated to the scrap heap.

In 1979, Cleveland Amory and The Fund for Animals learned that the National Park Service planned to kill hundreds of burros then living in the Grand Canyon.

“The burros, whose ancestors were castoffs from the gold rush era, grazed the canyon and lived as wild equines on public lands. Private cattle and sheep ranchers had long resented their presence, claiming the animals were eating food meant for their livestock. Armed with this anti-burro and pro-ranching ideology and a report from a wildlife biologist who recommended their extermination, the Park Service declared war on the burros. After unsuccessful attempts to run the burros off the trails, the next idea was to shoot the animals from a small aircraft. Amory realized that this would involve widespread wounding and suffering to a large number of burros, while the number of painless deaths would likely be few.”

The Fund filed an unsuccessful lawsuit to stop National Park Service from exterminating the burros but managed to negotiate rescue efforts - a deal that gave the Fund thirty days to rescue thirty burros and was described as “meeting with several obstacles, not the least of which was the Park rescinding its agreement.”

Due to their intial success, the Fund (with significant public support) convinced Park officials to allow rescue efforts to continue, turning the rescue into a two-year operation that airlifted 577 wild burros to safety from the Canyon walls.

California also once loved their burros so much, they declared them the state mascot and before the Wild Free Roaming Horse and Burro Act passed in 1971, wild burros were already protected from being harassed or killed under their California Fish & Game Code, protection which still stands today.....in theory.

These days, the California Department of Fish and Wildlife cites them only as “feral asses” instead of wildlife as they once did and the careful observer will note that almost all the studies provided in their feral ass description used to justify wild burros being destructive to habitat were written by the Desert Bighorn Council…..imagine that.

At the time the California Desert Conservation Area Plan passed in 1980, protected burro habitat through the BLM totaled over 3.5 million acres with over 2,700 wild burros approved to maintain the thriving ecological balance.

This same area today has less than 300k acres of habitat remaining and only 229 or less wild burros are now considered appropriate – a 90% reduction in both habitat and population despite their supposed federal and state "protected status".

Now.....California has 3 wild burro herds remaining - only 345 wild burros are allowed statewide on public lands before they are considered “excessive”, a threat to the habitat and consequently removed.

To learn more about Brighty's history and the terrible tragedies wild burros have since endured, read "They Also Served - So Long,Mojave Burros" by author Deanne Stillman at American Wild Horse Preservation Campaign.


The photo used is of a baby wild burro found within the Spring Mountain Complex in Southern Nevada taken before 572 wild burros were removed in January 2007.
Posted by Preserve The Herds at 4:38 PM