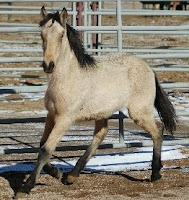 In 1999, the Lincoln County Elk Management Plan was approved within BLMs Ely Nevada District and overlapped 14 wild horse Herd Management Areas and 116 grazing allotments. The Elk Management plan cited there was no recorded evidence that elk had occurred within Lincoln county prior to 1979 when big game specialist brought them in.

In 2003, 12 of those overlapping Herd Management Areas saw a reduction in wild horse and burro AMLs in one fell swoop as BLM cut the allowable wild horse population from 884 to 644 within all 14 HMAs, a loss of 240 wild horses in an area that spans 2.6 million acres.

Meanwhile, the 1999 Elk Management Plan approved an eventual population of 1,850 elk within this same area and would have outnumbered wild horses by almost 3-1.

I say would have because in December 2007, the Ely Field Office released their Final Resource Management Plan, still pending approval, which proposes the complete elimination of 16 HMAs in the area with the main reason given as lack of water.

If BLMs plan is approved (which it probably will be), 1.6 million more acres of wild horse and burro habitat will be lost and all the wild horses within them will be permanently removed.

Here is a map provided in 1999 of the various water sources in the elk management area. 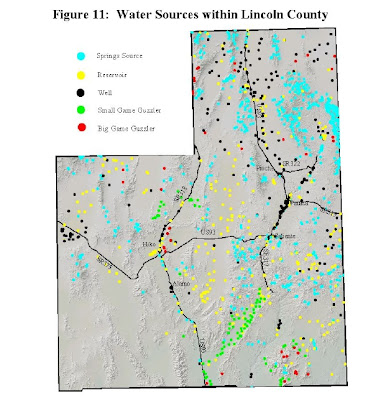 Here is a map of the wild horse and burro HMAs that overlap the elk management area. 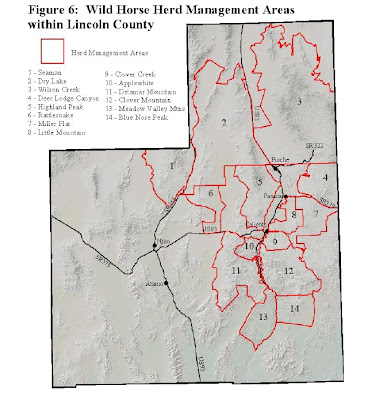 Here is a map of the HMAs overlayed on the water sources. 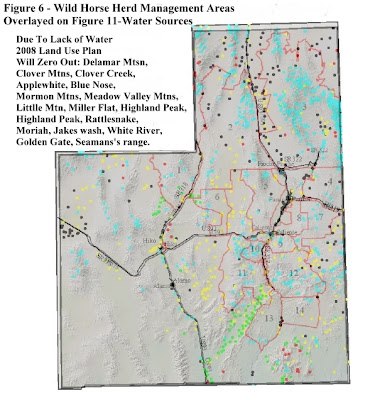 Of the 16 HMAs BLM intends to zero out for all wild horse use, 11 of them are in the same area as the 1999 Elk Management Plan.

One of these wild horse areas planned for complete removals is the Rattlesnake HMA. While it may indeed by as "nasty" as it sounds in terms of habitat, BLM had noted in a recent livestock grazing proposal that the Rattlesnake Allotments only riparian area was documented as being “heavily utilized” by elk, as well as, “the spring vegetation hadn’t recovered since 2002 because of elk abuse and livestock utilizing the burned area moderately.”

Wild horses are even hardier than elk so how come the habitat is good enough for elk but not wild horses? How come elk can live there and trash the riparian areas for at least 5 years and nothing is done about it while wild horses were scheduled for removals twice in the same HMAs in the same year "to protect the range".

Another of those proposed for permanent elimination is the Highland Peak HMA, which American Herds did a story on back in October titled "Forage Anyone?" In addition to elk within the area, Click Here to read how BLM is managing the livestock in the HMAs too!

Over and over again it seems there is room for everything in the "thriving ecological balance" but wild horses and burros.

Photo of Clover Mountain wild horse removed in December 2006 and one of the HMAs proposed to be zeroed out.

Posted by Preserve The Herds at 8:18 AM