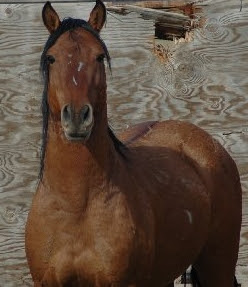 As the National Wild Horse & Burro Advisory Board’s 2/25/08 meeting draws near, rumors have been flying that managing wild gelding herds is the hottest topic currently on the table.

A review of prior Advisory Board minutes has revealed that indeed, what to do with geldings has been of special interest in the past to both BLM and Advisory Board members with subjects ranging from lowering age limits of when to start castrating stallions, how to promote gelding adoptions, and costs associated with long-term holding.

It appears the subject of gelding herds first began when the Advisory Board asked BLM to look into “storing” geldings now in long-term holding facilities in vacant livestock grazing allotments because the Board was looking for ways to reduce holding costs.

It took BLM two years to get back to the Board with an answer they summed up in one sentence and I’ve summed up even further - not feasible. The BLM provided no explanation as to how or why they came up with this final answer, so it looks like we’re just going to have to take their word for it and trust their conclusions.

In the same breath BLM announced this was not an option, they smoothly switched the focus from moving current long-term holding geldings to presenting the Board with an “alternative” of managing wild gelding herds in the HMAs instead. In other words, BLM has determined it isn’t feasible to take geldings out of long-term holding but it may be feasible to return gelded stallions after the round ups back to the range.

The Las Vegas Field Office has already proposed doing this twice but so far hasn't followed through and top BLM officials have affirmed the Wild Free-Roaming Horse & Burro Act allows for sterilization and are confident wild gelding herds can withstand any legal challenge.

So here’s some food for thought…….

Posted by Preserve The Herds at 2:23 AM

If they would return the geldings to the range and not count them, that would be an improvement. I can not believe that thay are talking about gelding stallions at one year of age.

I think the BLM ought to just leave our wild horses alone. They have mismanaged them to the point of extiction already.