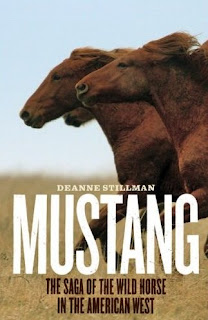 The long awaited “Mustang: The Saga of the Wild Horse in the American West” by Deanne Stillman is finally about to be released on June 9th! Of course, those on the “inside” got a sneak peak at it and here are some reviews.

“Deanne Stillman’s writing, research and inspiration in the creation of Mustang is stunning. When finished, readers will fret over how the U.S. government can continue to allow the destruction of those who have been our brothers and sisters for centuries: America’s wild horses”
-Michael Blake, author of Dances with Wolves and The Holy Road

“In Mustang, Deanne Stillman has written a classic in equine literature, an exhaustively reported and beautifully told tale of the American mustang viewed in the full sweep of his cultural and evolutionary development. The mustang is a national symbol and treasure. And, from beginning to end, now so is Stillman’s book – a riveting, compelling testimonial on why this free-roaming animal must be saved.”
-William Nack, author of Secretariat: The Making of a Champion

Her statements are well versed in history, science, and politics and point unflinchingly towards the impending doom headed the mustangs way if there isn’t a serious turn around from the path they are quietly being herded down through officially sanctioned government actions.

Ms. Stillman also states, “Now is the time for an immediate moratorium on wild horse removals, at least until population studies are brought up to date” and there is compelling evidence that the wild horses and burros actually still roaming free may be dramatically lower than the “officially posted populations”.

In that proposal, BLM said there were only 379 wild horses and that included the spring foals. Due to funding issues, the round up was postponed so BLM issued a new proposal ~ but this year, BLM projects wild horse populations total 607! That's a 60% reproduction rate in just one year while BLM simultaneously claims the Bald Mountain wild horses have one of the lowest reproduction rates of all wild horse herds, merely 12%.
In the Callaghan HMA itself, BLM removed wild horses in 2002 and mares were injected with PZP to slow down their reproduction. Even using the "standard" 20% increase BLM applies towards wild horses and not factoring in the effects of PZP at all, the population should only be 542, not 995 like BLM is now claiming.

BLM has also conducted several round ups in all the areas around the Bald Mountain and Callaghan HMAs in the last few years and many of them were just within the last year. Each time, BLM reported they removed all the wild horses that were “necessary”.

In other words, there was no shortage of what they took versus what they expected to take, they didn’t “disappear” and that means they didn’t migrate into these areas. These wild horses also didn't migrate into the "other" HMA either because BLM is reporting obscenely high populations for BOTH areas!
Since BLM got the go ahead to reduce wild horse and burro populations all across the West, there have been countless herds reported with inflated populations and these are then suspected of being used to justify the necessity of immediate round ups due to the “immediate threat of overpopulation”. But here's the catch ~ there's no proof these populations exist besides BLMs "word".

BLMs own statistics consistently don’t support the populations they say are still remaining on the range and over the last few years, residents familiar with various herds have reported that wild horse and burro numbers are so low that they can barely find them anymore.

Ms. Stillman’s call for a moratorium on wild horse removals should be fully supported by anyone who cares for these magnificent animals as they deserve a place to live, both as a species in their own right as well as through their deep connection to our history, our culture and our Nation.

Until current population counts are done (and NOT by government agencies that have an agenda to remove them), the round ups should stop NOW!

To order your copy of
Mustang: The Saga of the Wild Horse in the American West
Click Here
Posted by Preserve The Herds at 12:57 PM