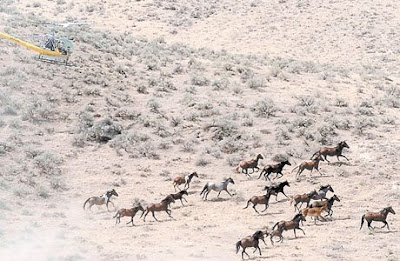 A variety of round up proposals are looming on the horizon effecting America’s wild horses and burros and we can safely say none of them bode well for America’s dwindling free-roaming equines. Here is a brief summary of what’s coming…..

Round Ups
The following round ups propose to gather 2,972 wild horses in 9 Herd Management Areas (HMAs) over the next several months. If you submit comments, please include the name of the proposal and/or any EA#s provided and be aware that all information you supply, including personal information, will become part of the public record. While you can request that your personal information be withheld, in some instances, BLM may not be able to censor it from release.

Last “official” round up occurred in 2002 but also had emergency fire removals in 2006.

BLM proposes to round up 511 wild horses, remove 399 and leave 139. The public can support one of two options; using the experimental fertility control drug PZP or not on the released mares after the capture. Removals are expected to begin in July or August.

BLM proposes to round up 1,680 wild horses, remove 1,409 and leave 359. The round up is expected to occur in the fall/winter of 2008 and the public can support one of two options; using the experimental fertility control drug PZP or not on an estimated 136-163 released mares. The BLM may also conduct a Trapsite Adoption of wild horses at the round up pens.

The three HMAs span 380k acres with an allowable population not to exceed 595 wild horses. BLM has allowed a maximum of 7,140 AUMs of forage for wild horses and 62,284 AUMs for the livestock allotments affecting these HMAs with a total of 29k head of sheep and cattle grazed at various times throughout the year. At present, it is not known what percentages of these allotments are actually in the HMAs.

The Complex covers the Conant Creek, Dishpan Butte, Muskrat Basin and Rock Creek Mountain HMAs. The BLM proposes to round up approximately 515 wild horses but has provided no estimated removal or remaining numbers. The round up is expected to occur beginning October 1, 2008 and the public can support one of two options; using the experimental fertility control drug PZP or not on the released mares.

The four HMAs span 375k acres with an allowable population not to exceed 536 wild horses. BLM has allowed a maximum of 6,432 AUMs of forage for wild horses. No information is currently available on livestock allocations in these areas.

The Proposed Action is to shoot 45 mares with the experimental fertility control drug PZP and brand them with the Idaho state brand of AA. Mares that were given PZP in 2004 may be shot again and if so, a 1 will be added to their freeze brand. BLM claims that without using fertility control, wild horses will need to be removed again in two years.

The Challis HMA spans 167k acres with an allowable population not to exceed 253 wild horses - the round up is expected to occur in summer 2008 and BLM has already signed the preliminary approval for the proposal. BLM has only authorized forage for wild horses to cover the low AML of 185 (2,220 AUMs of forage), not the high of 253. This is why BLM must use fertility control – because they have not issued enough forage to sustain the “high” AML but have given it to livestock instead.

The Challis HMA has 6 livestock allotments affecting the HMA with 13,659 AUMs issued for livestock use with over 5,300 head approved to graze annually.

AUSTIN, Texas — The State Parks Division of Texas Parks and Wildlife Department will host a public meeting on Thursday, June 12 at 7:00 PM at the Bellaire City Hall Auditorium, 7008 South Rice Avenue in Bellaire. The meeting will focus on natural and cultural resource management activities on state park properties, with a particular focus on management challenges at Big Bend Ranch State Park.

Following a short informational presentation, the public will be invited to comment on current management strategies for removal of feral animals such as burros and exotic species such as aoudad sheep from the park and may offer alternative solutions and suggestions.

The Big Bend Burros were the focus of intense controversy after officials began shooting the century old burro herds and leaving them to rot in the Park as officials now want all the Parks resources for exclusive use by the soon to be introduced tall dollar hunting species, big horn sheep. For more information on the Big Bend burro’s travesty, Click Here to read "Big Bending The Rules".
Photo of wild horse round up in the Owyhee HMA taken from BLMs website, Wild Horse & Burro Program. www.blm.gov
Posted by Preserve The Herds at 11:16 PM

Get it straight. The public is not restricted to supporting only two options for the Callaghan Complex gather. The scoping letter asks for comments alternatives and other recommendations from the public. If someone has a better idea, they can send it in. The management levels were already set through BLMs official process which included public involvement. That was the proper time to be involved for deciding how many horses would be allowed in these areas. This current gather scoping is for the gather to achieve those management levels.

At least have the decency to be accurate before smearing these people. Your population figures reported for Bald Mountain are wrong too. You need to re-interpret what is really going on. Be responsible, report the facts and remain objective. Isn't that what you want the BLM to do? You do it too. Help, don't hinder.

A response to this comment has been posted on 6/17/08 titled Gettin It Straight.