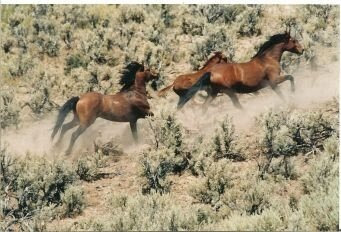 In Janaury, 2008, Quarter Horse News published an article by Linda Hussa titled, "185 Wild Horses Dead" about the events that led up to the deaths of 185 wild horses rounded up by BLM from the Jackson Mountain Herd Management Area in August and September in 2007.

On January 21, 2008, American Herds posted their own response to the issues raised in the article with a post titled Pure Propaganda.

The next month, Quarter Horse News published BLMs response to their article via a letter written by Wild Horse and Burro Division Chief Don Glenn, which can be viewed by clicking Here.
Reading Mr. Glenns letter, Nylene Schoellhorn, a wild horse advocate from Silver Springs, Nevada was inspired to challenge Mr. Glenn's statements with her own letter and reply. Quarter Horse News did not provide any format for people to comment about either article and so, in the spirit of sharing, American Herds has decided to provide a place for Ms. Schoellhorn's letter to Mr. Glenn. The views and opinions expressed by Nylene's letter are her own.

I would like to reply to your letter regarding our American wild horses.

First of all---for the Bureau of Land Management to 'manage' should mean---you DO NOT let the cattle ranchers fence wild horses off from the drinking water. Which they do here.

It means you DO NOT let the cows have more land than the wild horses. Which the BLM allows here.

The 1971 law states that wild horses have PRIMARY rights to their traditional lands. The BLM does not do that here either. There is now less then one wild horse for every 150 cows on our public owned lands.

If you are so concerned about a 'wild horse population yearly increase' then have the BLM stop killing off all their natural predators-the coyotes and wolves and cougars. But the cattle ranchers would not stand for that -would they?

You state that the wild horses eat up habitat that place other wildlife species and livestock at risk. You MEAN- wild animals hunted on BLM land for sport and all those cows. A Big Horn Sheep hunting tag currently can sell for thousands of dollars. That is what you MEAN. A cow that is a private owned domestic animal that feeds on our public owned land for a token amount of money compared to what private cattle grazing land costs. That is what you MEAN.

The "scientific fact" is that this is all about money. Wild horses don't make money. Unless hunters could shoot them. And the BLM knows the public would never stand for wild horse hunting. Nor will they eat them. Nor allow them to be slaughtered and sent to France, as which happens with our domestic horses. So the BLM considers the wild horses useless.

As far as 'appropriate management level" goes-I repeat- there is now less than one single wild horse for every 150 cows on our public owned lands. (BLM statistic) One vs one hundred and fifty? How is this this figure in any way 'appropriate'?

'Natures Cruel Hand'? Is that what you think? How about the BLM's cruel hand? Instead of placing the wild horses in 'long term holding facilities' -why don't you round up and do that to the cows? It would make more sense. After all, they are domestic animals, raised to be slaughtered for beef. The reason that less that half of your budget goes for "managing wild horses and burros on the lands'' is because the MAIN focus of the BLM Wild Horse and Burro Program is removing wild horses and burros from our public range lands so there is more room for cows.

You state -"If Mother Nature were allowed to step in and control the population in her own unforgiving way...". Are you KIDDING me??? The BLM allows ranchers to fence off the wild horses from water, even shoot them (have you guys caught the latest killers of the 3 baby wild foals recently shot out by Pyramid? No- and you won't.)

You round the wild horses up in terrifying helicopter chases where they are often injured and even killed. You keep no records of how many of these injured rounded up horses later die-and also die from eating too rich food they are not used to- (I have watched all this happen) -and place them in 'holding facilities" where they also get sick and sometimes die-you sell them however you can-$125. was the price last time I checked--and you NEVER check on how the newly 'adopted' horses are doing...and you promote the carefully worded '10 years of age' program-so they can then be sold to kill buyers who take them to slaughterhouses!

You make no mention of any of this-but describe a death in the "natural setting" as cruel. You describe the wild horses as starving to death. The truth is-this is not a natural setting. This is a setting without the wild horses natural predators, coyotes and wolves and cougars,which the BLM is also busy hunting down and killing-after chasing them in helicopters and shooting them or poisoning or trapping them...as a favor to the cattle ranchers (and with our tax money).

You also don't mention that when a wild animal-such as a wild horse-lives and dies on the land, its body stays on the land, and nourishes the land and other animals. That seems a much better death than being rounded up and hauled off in crowded trucks to a slaughterhouse to be stuck with electric prods and have a metal bolt gun slammed into your head and then your throat cut open and hung on a hook to bleed out....which is what you have promoted for wild horses over the age of 10.

You speak of 'economic harm' to ranchers and rural communities. There it is. There it is the bottom line-this is all about money. The truth is, most cattle ranches in the west are now owned by huge companies and stockholders back east-not small family ranches. Paris Hilton's family is one example. Poor hardworking ranch owners!

In any case, cattle ranching is a dying industry. More and more people are realizing that eating beef is not good for our environment, our health, or our economy. A wiser course of action for the BLM would be to look to the future-to promote Eco-Tourism of our public owned lands. Come visit with cameras-not guns. Wild horses do not need to be 'managed'. All they really need is to be left alone, along with all the other wild animals, on our public owned lands.

The BLM manages over 5 million acres of land. Surely that is enough land for viable herds of wild horses to run free, (without chemical birth control, castration or roundups) as the 1971 Wild Horse Act states.

BOYCOTT BEEF! IT IS WHAT IS KILLING OUR WILD HORSES AND PUBLIC OWNED LANDS!