What Are They Hearing? 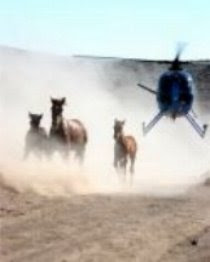 Last Thursday, the Nevada BLM conducted their annual hearing on the use of helicopters to remove wild horses and burros from public lands and public concerns finally made the local news.

As to be expected, BLM continues to offer assurances that they take every precaution and humane considerations are at the forefront of their minds in all their decisions. Little surprise there, huh? They issued the same statement last year less than an hour after the hearing ended, then stating they had conducted a “thorough review” of round up procedures and public concerns and of course, determined all concerns were entirely unwarranted.

Apparently, it took even less time this year as Nevada’s Wild Horse and Burro Lead Susie Stokke told local reporters the same story while outside the hearing room.

You can watch the news video of the hearing by clicking Here and it includes wild horse advocates shaking papers at BLM exclaiming the proof is right under their noses with scores of eye witness reports - yet BLM just continues to deny, deny, deny……

Notice while Susie Stokke states in her interview that humane considerations are the top of BLMs priority list, the first reason cited when they are showing wild horses being rounded up is BLM touting the efficiency of helicopter removals.

And why is efficiency so important? Well, because BLM states there are too many wild horses and burros for the range to support (really...has anyone seen any independent numbers on what's REALLY left in the last decade?)

After all, leaving them wild causes resource degradation, competition to other “users”, threats to wildlife and may cause “catastrophic loss” of life to the wild horses and burros themselves (this is BLMs newest statement to describe the depth of the emergencies used to justify efficient and expedient removals).

Watch as Susie discusses how closely BLM monitors their activities and if anyone needs proof of just how close BLM watches range conditions or how concerned they are for their welfare, go back and read what happened at Jackson Mountain last summer.

Of course, this was certainly the exception to the rule, as surely BLM will tell us. Why? Because BLM actually got caught holding the dead bodies, unlike the usual situations where the public is only allowed in on “approved days”, at “approved locations” during “approved times” when BLM conducts removals. For animal and public safety, of course…..

But they certainly do see a need to keep a strict watch and a close eye on the public getting anywhere close to their “unapproved” removal activities. Like in January 2007 when local veteran investigative reporter George Knapp and the I-Teams helicopter was escorted out of “their” airspace and told not to come back when they tried to get some “unapproved” footage.

Or when local residents in Cold Creek had arranged for their own independent population census after an allegedly illegal gather occurring that BLM and USFS shut down by citing “harassment” clauses.

Or the undercover footage of USFWS 2006 Sheldon wild horse round up on American Wild Horse Preservation Campaigns website, undercover because they would not allow the public within 2 miles of the gather operations.

Or the rumored cost of security forces at the Clark Mountain wild burro round ups in California in January 2007 reported to exceed $70k to “protect the safety” of the gather operations. Ironic that BLM can spend $70k to pay the local sheriff to keep the public at bay yet they could not afford to allow volunteers and volunteered materials to run a water pipe to keep the Clark Mountain burros from being irreplaceably lost. Fortunately, that $70k spent in keeping everyone safe was well spent as the Clark Mountain burros are now safely tucked into their adoption/for sale program.

As Susie continues to spout BLM statistics to support BLM decisions, the questions posed to the National Wild Horse and Burro Advisory Board last July about humane standards continue to remain unanswered.

While he has yet to issue any statement, offer any studies or provide any answers to these questions, Dr. Boyd Spratling, BLMs chosen representative for Veterinary Medicine for the National Wild Horse and Burro Advisory Board, current rancher and former head of Nevada’s Cattleman Association has provided the public with a recent snapshot of what he thinks is important to consider when questioning BLMs standard operating procedures with helicopter removals.

Let us all take comfort and reflect on Dr. Spratling’s statements issued in the Quarter Horse News January 2008 article, “185 Wild Horses Dead” when he says,

“The BLM is being impeded by so-called advocacy groups from making proactive management decisions and implementing them and until we can stop legal action by them, this situation falls squarely on their shoulders in my mind. The very people that claim to care the most about those horses were actually the ones driving the death nail in their coffin. They don’t understand what the consequences are or the dynamics of the resource and what can happen on a drought year. Mother Nature takes a harvest whether it be through fires and the tough winter that follows, or drought or whatever the reason, and it’s usually a very ugly situation.”

Thank you Doctor for your very “scientific” insight into the subject. We are all looking forward to BLMs continuous assertions of just how objective and realistic they are while citing Symanski-1996 as their “scientific support”, aka, How wild horse and burro advocates are just TOO emotional and ignorant to be considered credible on the subject.
Posted by Preserve The Herds at 2:02 PM

It looks like the BLM doesn't want to answer any questions. Why? If they didn't have anything to hide they would be glad to answer any inquires it seems to me. How many die being loaded into trailers and transported for miles? How many wild horses die in the corrals and pens after being rounded up? I have asked but never received any answers.

The helicopters put a fear into the horses that never leaves them. We always train the fear out of them. A few years back a young lady was thrown and killed by her mustang because of a helicopter Here in our county. They did not know about mustangs being affraid of helicopters. I have been telling this to BLM for years to no avail.
L B Ranch Mustangs