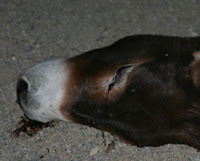 On December 6, 2007, a recent shocking investigative report by Sterry Butcher was published in the Texas Big Bend Sentinel outlining the cold-hearted inhumane killing of centuries old wild burros in Big Bend State Park, the corruption and cover-up of animal cruelty charges of the high-ranking State Park officials that did it and retaliation against the Parks Superintendent, Luis Armenndariz, who spoke out against the killings.

For over a year, State Parks Regional Director Mike Hill and Deputy Director Dan Sholly have been shooting Big Bend State Parks wild burros, leaving their bodies to rot wherever they fell and their drive-by death toll now totals at least 71 wild burros since the shooting spree began.

Not knowing the wild burros were being killed by his superiors, Big Bend Park Superintendent and thirty-five year State Parks veteran Luis Armendariz ordered an investigation into the brutal shootings and decaying corpses that were found scattered around the Park since October of last year.

In response to Armendariz request, Robert Garcia, the original investigative officer began accumulating evidence that catalogued the extreme suffering inflicted on the Big Bend wild burros by Hill and Sholly’s callous disregard, which included photographs of wild burros not receiving a humane “kill shot” but instead being shot in the hips and belly, a documented case of one burro left to suffer for two weeks before finally dying from its mortal wound and another instance where a baby burro was found still trying to nurse the now dead mother.

Yet Texas State Park & Wildlife’s Internal Investigation report cleared Hill and Sholly of animal cruelty charges and all wrongdoing despite Garcia’s documented evidence of the abuse. Instead, officials preferred to issue a transfer to Park Superintendent Armendariz, forcing his resignation on November 30, which also led investigative officer Garcia to quit in disgust due to the magnitude of the cover up and retaliation levied against Armendariz.

Though wild burros have completely naturalized themselves within the Parks ecosystem, Park officials are issuing a long-line of regurgitated popular propaganda often used against wild burros by those who seek their habitat for bighorn sheep, the largest revenue generating hunting species in America.

The current spin includes beating the non-native, invasive, feral, exotic drum that recounts every imaginable environmental horror known to man and by the time they get through, we are forced to believe the devastating impacts of a wild burro herd are equivalent to that of an atom bomb. For a look at the desolation wreaked by the centuries of burro inhabitants on Big Bend Park, click Here to view their promotional video.

Big Bend Ranch employee, Samuel Marquez told investigators “The burros were not hurting anything” and he should know, since he’s travels the Park on a daily basis but that won’t stop big game enthusiasts posing as environmental experts from lying about their impact to promote the introduction of bighorn sheep - they hope to harvest the bighorn for big bucks in the near future.

Wild burros are not even listed on the State Parks Wildlife Nuisance Species list but you can bet that’s about to change to help cover their own asses while they kill ours!

Park officials also try to legitimize shooting the Big Bends burros by quoting an environmental organization’s “policy” as to why they are authorized to exterminate wild burros, specifically the Sierra Club’s long-standing orders that wild burros will not be tolerated due to their non-native status while supporting their “humane removals via firearms” to garner more bighorn sheep habitat.

If you would like to demand justice for the current cover up of the cruelty and suffering the burros have been subjected too, protest the retaliation against honest and ethical Park employees or show your support for the preservation and humane treatment of the Big Bend wild burros still remaining, click HERE for The Twelve Gifts of Christmas you can give to them this holiday season!

To learn more about this story, here are links to some of the articles currently published about this corrupt and heartbreaking tragedy.