Orphans of the Desert 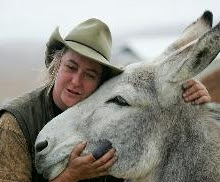 Wild Burro Preservation and Rescue Project located in Olancha, California is one of the only American sanctuaries dedicated to wild burros in the United States.
Surrounded by wilderness and in a remote sage brush valley adjoining the majestic high Sierra mountains, the sanctuary is home to over 200 burros, horses and mules as well as numerous rescued domestic animals.

In 1985, Diana Chontos and Founder of Wild Burro Rescue became aware of the United States government public land use policies that were threatening the survival of wild burro herds throughout the Southwest. She began her journey into wild burro preservation by spending the next four years rescuing, gentling and living with six wild burros.

In efforts to raise public awareness of the plight many wild burros herds now faced, in the summer of 1990, Diana and her burro companions departed on a two-year wilderness trek to help educate the public about issues that were threatening their very existence.

After walking 450 miles and wintering over in Northern California, Diana learned that a herd of wild burros were being held in Nevada and were awaiting slaughter. Faced with the choice of continuing her trek or rescuing the animals, she chose to save the burros and Wild Burro Rescue was born.

In 1994, Diana discovered National Parks Services “Direct Reduction Management Plan” and in real world terms, this meant shooting wild burros whenever they were found. Between 1987-1994, over 400 wild burros are documented as being killed with government approval until she and Wild Burro Rescue stepped up to the plate.

Diana began long and intense negotiations with agency officials that finally resulted in an agreement allowing her to conduct live capture removals instead of their lethal removals - just as long as WBR organizes, funds and conducts the removals themselves.

The first rescue began in February 1995 and since then, not one wild burro has been shot because of her intervention. Of course, there’s a catch – Park Service will only suspend the killings as long as she can afford the live captures when officials discover a wild burro on their land.

Proclaiming them "Orphans of the Desert", Wild Burro Rescue developed an educational video that chronicles the Death Valley rescues as well as the wild burros’ move to their new Olancha sanctuary in the year 2000. To purchase your DVD or VHS copy, click HERE.

You can also watch a short educational video offered by Channel G TV that briefly illustrates the history and work of the Wild Burro Preservation and Rescue Project.

While Diana’s courage, dedication and the personal sacrifices that pioneered these amazing rescues are an inspiration to us all, continuing to conduct the live capture rescues, providing feed, medical attention, shelter and yes, even toys to these otherwise doomed burros is no easy task and the burros can use some help.

Describing life at the ranch, Diana writes, “We eat beans by candlelight and carry our water”. Anyone else you know so dedicated that they are willing to live this way to benefit the animals instead of themselves?

While the TOP PRIORITY is raising money to provide a well for water now being hauled by truck for the burros, the onset of winter comes with its own set of problems. With many of the burros being older, having special needs and requiring special care, the WBR has also put out a call for help because they would like more sheds to protect the burros from the icy snow as they are no longer “free” to find their own shelter.

Some of the other items their WISH LIST also includes:

Posted by Preserve The Herds at 7:32 PM