Burro is the Spanish word for donkey and donkey is the English word for a domesticated wild ass.

While this may seem a little boring to those of us who merely love wild burros, its vital to understand the critical crisis wild asses face throughout the world today as all of the species cited above have been in some way listed as either Vulnerable, Threatened, Critically Endangered or possibly Extinct. 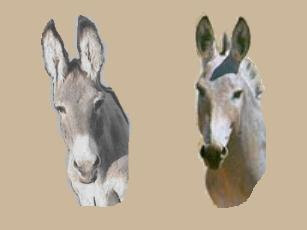 Can you tell which one is which?

The African Wild Ass is cited as one of the rarest animals in the world (ICUN, 2003)

The African Wild Ass (equus africanus) was listed on June 2, 1970 as Critically Endangered and wild populations are currently estimated at only a few hundred remaining or possibly already extinct.
Despite this endangered status for over 37 years, no studies, recovery plans, agreements or progress has been made toward the preservation of this ancestor of our wild burros.
One of the only modern comprehensive sources of information available on the ass species is Equids: Zebras, Asses, and Horses: Status Survey and Conservation Action Plan by Patricia Moehlman, P.D. (2002) and the Equid Specialist Group of IUCN.

While the BLM has been “managing” wild burro herds for over three decades, almost no studies have been compiled on wild burros in general or of their individual herds – they are just “lumped in” with wild horses on every level.

What limited historical data and studies has been done regarding wild burros has primarily been compiled by those interested in promoting big game species such as bighorn sheep who flourish in similar habitats as our own wild asses.

Needless to say, these “authoritative opinions” always finds wild burros a great threat to any species and habitat; no matter how many centuries wild burro herds have been documented in the area, totally naturalized and co-existing in harmony within those ecosystems.

In July 2000, Patricia Moehlman, Chairwoman of the Species Survival Commission and Equid Specialist for the World Conservation Union appealed to BLM to initiate more studies of our American wild asses in efforts to obtain relevant information for critically endangered asses throughout the world.

However, the BLM had just released their “Strategy to Achieve and Manage Wild Burros at Appropriate Management Levels” in June of 2000, which authorized wild burro populations to be slashed nationally by at least 66%, despite their “federally protected status” - Dr. Moehlmans appeal for help was ignored. (1)

While studies on wild asses stated their reproduction rate was only 4% in good years, the BLM has applied their “wild horse reproduction rate” of 20% per year (also in serious question) to wild burros as well.

For a complete overview of the current crisis facing our wild burros and their habitat, visit American Wild Horse Preservation Campaign, Studies in Mismanagement, Wild Burros of the American West, A Critical Analysis of the National Status of Wild Burros on Public Lands – 2006.
The African Wild Ass is the right photo and one of the only photographs in existence of this species. It was altered from the original photo copyrighted by Brent Huffman www.ultimateungulate.com for educational purposes only.
(1) 66% reduction in wild populations was based on the 1971 census. Based on the 1974 census results, wild burro populations have been gutted by over 80%.
Posted by Preserve The Herds at 4:11 AM