How Muddy The Mountains... 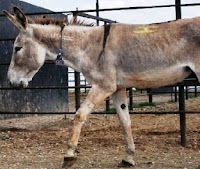 The Muddy Mountain Herd Management Area (HMA) is located in Southern Nevada adjacent to Lake Mead and the Lake Mead National Recreation Area, which is managed under National Park Service jurisdiction, part of a “Complex” in the Lake Mead area. It includes the Gold Butte and El Dorado HMAs in Nevada and the Tassi-Gold Butte Herd Area on the Arizona side and was once home to one of the largest concentration of wild burros in the Southwest.

At the time the 1971 Act was passed declaring that wild horses and burros would be preserved where “presently found”, approximately 659,000 acres were identified in the Lake Mead area to be set aside for wild horse and burro preservation. (1)

A significant portion of this, approximately 338k acres, fell under National Park Service (NPS) jurisdiction who has adopted the Sierra Clubs environmental policies over federal law of not allowing “feral burros” on a huge list of various “public lands” that includes:
“Complete elimination of herds from all federal and state lands where they “pose a threat” to habitats in which rare, endangered, threatened, or endemic species of flora or fauna exist, all areas protected by the Antiquities Act, all national recreational areas where they pose a threat to rare, endangered, threatened or endemic biota, or cultural sites protected under the Antiquities Act, and key wildlife habitat, including desert bighorn habitat of the American Southwest, and from designated natural areas.”

Then came the new policy of Herd “Management” Areas in the 1980’s allowing BLM to carve the original territories into smaller areas deemed “appropriate” for management. The end results of this two-sided attack zeroed out the Tassi-Gold Butte and El Dorado areas completely by 1998, leaving only two of the four territories remaining.

The "managment" herd areas carved out of the original Herd Areas further reduced the acreage until only 257k acres remained with all lands that connected to the Lake being under NPS jurisdiction – the only significant source of water in the area.

For years, BLM and NPS had a mutual arrangement called a Memorandum of Understanding (MOU)(2); a common way two different agencies resolve differing “missions” under their respective jurisdictions. In this case, the MOU revolved around water usage for the burros at Lake Mead – the burros were allowed “incidental use” of the water as long as they didn’t stay in the area and moved back into their BLM managed territory once they were through drinking.

Though the MOU outlined that if wild burros did take up residence on NPS land, they would coordinate with BLM to have them humanely removed through the adoption process, many residents in the Southern Nevada area have recounted stories of NPS using the “humane disposal methods” outlined by the Sierra Club – shooting wild burros “with recommendations to donate the carcasses to government institutions” and have stated that wild burros at Lake Mead simply “disappeared”.

In April 2005, BLM and NPS renewed their MOU to allow wild burros access to Lake Mead water with the stipulation that BLM would establish the burros “Allowable Management Level” (AML) based on forage supply in the designated management area while NPS would allow them access to the water. Yet in December of 2005, BLM zeroed out the Muddy Mountain HMA by determining that a critical habitat requirement was not present – water – and therefore established the “new” AML at 0. (3)

In the meantime, the Lake Mead area is home to a large concentration of desert bighorn sheep and the Muddy Mountains is touted by Nevada Department of Wildlife as the second largest hunt unit in the state.

One of the ways this became possible is through the addition of water developments that turned a part-time seasonal bighorn habit into a year-round area allowing bighorn numbers to continue to expand. Of course, no water developments are allowed for wild horses or burros, just all wildlife and livestock.

In 2006, the desert bighorn population in the Black, Eldorado and Muddy Mountains was estimated as almost 1,000 adults with approximately 265 in the Muddy Mountain area itself where a large part of the wild burro management area existed. (4)

Big game specialists have drawn up management plans that indicate 505 bighorn can thrive in this area “based on forage availability”, the same “forage availability” that BLM was suppose to use to establish the wild burro population AML according to their signed April 2005 agreement. (5)

When BLM laid out its plans to the public for the last gather and permanent removals of the Muddy Mountain burros, they refused to release the terms of agreement with NPS citing, on written public record, “The agreement between BLM and NPS is an administrative issue internal to both agencies”. (6)

After the Muddy Mountain wild burros had been permanently removed, Nevada State Director Ron Wenker finally allowed the release of this agreement and casually tossed aside the Las Vegas Field Offices refusal to allow public access with his assurances that BLM didn’t mean to imply it was not available to the public. Director Wenker did offer the additional advice that if the public believed the BLM was “in error”, we could always request an administrative review. (7)

Considering the fact that the evidence to appeal BLMs decision was withheld until all the burros had been removed, the deadline to appeal the decision had passed before it was released and the public has not won an appeal of BLMs decision in over a decade, this was comforting advice indeed.

So in March of 2007, after decades of calling the Muddy Mountains home, we waved goodbye to the last sixty-six Muddy Mountain wild burros and said hello to the exclusive bighorn herds that will now replace them.

Posted by Preserve The Herds at 12:17 PM