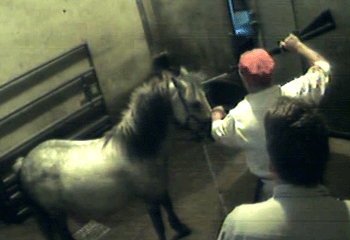 Well, as expected, it would appear BLM has decided it’s now a free for all in the Wild Horse and Burro Program and destroying the herds as fast as they can is at the top of their agenda.

In a sad parallel to other atrocities committed by corrupted zealots, I’m reminded of the killing frenzies conducted by the Nazi’s when they realized their “kingdom” was about to fall.

In one week’s time, we have seen:

1. BLM approve a Herd Management Plan for the Nevada Wild Horse Range wild horses, the first and oldest of America’s protected herds, a plan that includes a little one liner about the “option” to completely wipe out the herd and replace them with 100% geldings.

Imagine….BLM has granted themselves the “authority” and option to now ship geldings into a restricted military base where no prying public eyes can go.

2. The option to castrate stallions right in the field at the round up pens and then release them back into the wild 24-48 hours after surgery, all the while maintaining BLM will monitor all geldings for 7-10 days.
Sure they will....and if they bleed to death, who will know?

3. Unsatisfied with “selling” America’s heritage species, BLM now wants the authority to shoot them straight on the range for any reason in a tidy little package called euthanasia.

And they also want to do it FAST, especially with 1,000 wild horses currently being gathered at the Nevada Wild Horse Range at this very moment (aka, Nellis Air Force Base).

According to wild horse advocate, Karen Mayfield, who attended Mondays National Wild Horse and Burro Advisory Board meeting, the Advisory Board has appointed a three member panel that is suppose to “discuss” euthanasia via conference call within 10 days of last Monday’s meeting.
Apparently, for the first time in their bureacratice history, they have a fire under thier butts to "do something" about BLMs mess, which they have supported and encouraged every step of the way.

Other Board recommendations included:

*Board Recommended to implement to review their census.

*Recommend for BLM to come up with 3 HMA's for the gelding issue.

*Recommend for BLM to act in a timely manner to present Herd Management manual.

*Recommend euthanasia. They have delegated a subcommittee of three of the advisory board members to have a conference call within the next 10 days to discuss euthanasia.

*They also discussed Instant Titling for the Long-Term Holding Facilities, which would take act of Congress.

So the big questions at the moment are…

Do these three members have the authority to issue a “kill” decision or does it have to come from the Secretary of the Interior?

Apparently BLM believes they do NOT have to get permission from Congress to begin shooting wild horses at the round pens, only at the long-term holding facilities. Does BLM intend, based on the “three member recommendations”, to begin to immediately start euthanizing wild horses, perhaps at Nellis or some of the other “emergency round ups” planned in the next few weeks?

Euthanizing wild horses and burros is already legal – it was built into the Wild Free-Roaming Horse and Burro Act but Congress has previously forbid it. However, the Secretary of the Interior has been given “broad powers” to manage the Wild Horse & Burro Program as he sees fit and since it is already legal, in my opinion, he DOES have the authority to exercise this option.

And what’s Congress or a judge going to do about it since it’s already an established law?

Is BLMs newest plan to just shrug their shoulders later IF Congress “slaps their hand” and then issue an insincere apology of “Our bad….” over the bodies of the now dead wild horses?
Posted by Preserve The Herds at 12:21 PM

Now I have to agree with Anonymous who wrote "Get it straight". While it may be true that BLM considered (but dismissed from detailed study) a proposal to manage the NWHR as a non-breeding population in its entirety, BLM's selected alternative would manage only a small portion of the herd as geldings (about 30 to 35 geldings initially, with the option of managing for 60 to 100 geldings over time). Which would leave a breeding population of about 240-400 studs and mares. And...the geldings would be studs born on the range not imported from somewhere else, allowing them to remain on their home range for their entire lives. What could possibly be better than that?

hahaha - don't count your GAO chickens before they're hatched... you may be eating crow...

I have real issues with the BLM using the word euthanasia. First of all euthanasia implies something more humane that what the BLM is proposing.
The word association when someone hears euthanasia is to be held in loving arms and sent off to la la land, peacefully. There is NOTHING peaceful about what the BLM is proposing to do to 30,000 plus horses currently in holding facilities. Do you honestly think that they are going to gather each and everyone and give them an injection (three are required for euthanasia) and let them go peacefully to sleep? Hell no they aren’t. How this dirty deed will be performed is with a gun, dropping horses everywhere around before each one gets it’s turn in a blood bath babies included! I urge EVERYONE...when you are discussing this vial proposition of the BLM lets call it what it is… SLAUGHTER. No where in your posts, articles, or discussions should the word euthanasia come up.
a couple of points to take into consideration..