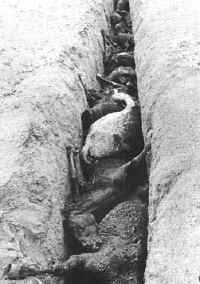 It’s the New York Times, one of the “top” news sources in the country or so I’ve been told. I have never read the NYT much, my exposure to their journalistic excellence limited to jokes about it as a news source from Stephen Colbert of the Colbert Report. Yet for the first time ever, I have found myself agreeing with FOX News…..This is fair and balanced media?
I guess nothing is what is use to be as official news sources sound more like blogs and people like me are having to create blogs just to try and pick up their slack. Let me also say, at least I distinguish the difference between my opinion and the facts or at least try to present the facts that justify and form my opinions.

Today the New York Times published an article titled, “On Mustang Range, a Battle on Thinning the Herd”, which finds writer Felicity Barringer making some astonishing statements. I would be very interested in knowing how she, in good conscience as a journalist, found actual support for much of what she penned or why the editors of the NYT found this an appropriate forum for her opinions.

Perhaps the NYT would consider publishing Ms. Barringers source about her claim that, “Mr. William’s article infuriated the mustang advocates even more than the agency’s proposal to resume euthanasia.”

Really? What facts or polls is this taken from? Could it be Mr. William’s own opinion Ms. Barringers used as substantiating evidence for this odd statement? I’ve heard his ego is large enough to shoulder his opinion of his own opinions.

What I haven't heard is a single wild horse and burro advocate that was “more outraged” by Ted's opinions than they were by BLMs recent declaration of wanting authority to kill or sell America’s wild horses and burros for slaughter and I have talked to more than a few since BLM made this announcement.

In my opinion, which is backed by reams of well-documented supportive statistics, BLM unsubstantiated “need” is nothing more than a public declaration that their malfeasance cloaked as management merely desires to cleanse the American scene of the presence of mustangs and burros to make way for more lucrative industries.

While we find the NYT article provided links for those quoted about the “mustang problem” such as Ted Williams, the Bureau of Land Management, Nathaniel Messer of former BLM service in BLMs highly "selective" National Wild Horse & Burro Advisory Board, Steven L. Davis of Oregon State University and even the Earth Liberation Front, which I’m still scratching my head about as to the actual relevance this obscure reference was intended to serve, the NYT obviously felt no such links were necessary for any source that challenged these one-sided claims.

As for the BLM officials quoted, I couldn’t help but chuckle at Ms. Barringer’s uncanny ability to find some of BLMs prized authorities on the subject of mustangs and burros.

First, there is Arlan Hiner from BLMs Winnemucca Office, the guy who knew the Jackson Mountain wild horses were standing in empty troughs with no water for at least two months before issuing the helicopter driving decision where 185 wild horses eventually died due to “nothing related” to BLMs involvement (to hear BLM tell the story) or who recently developed and authorized a grazing plan in Soldier Meadows to put up more fences for more cattle that BLM admitted could potentially entrap the wild horses and cause them to die in the winter snows.

Then there was Alan Shepherd, reported by the NYT as the guy “who helps run the contraceptive program”. This statement is beyond laughable as Jay Kirkpatrick, also quoted in the NYT article, is actually considered the Father of the fertility control program now being used on mustangs, and that's Dr. Jay Kirkpatrick NYT, the real guy “who helps run the contraceptive program” - with wheel barrels full of overwhelming scientific accreditation and citations to back up this well-documented fact – but proves to be something the NYT completely fails to notice.
Even more incredulous is the fact that the New York Times actually published an article about Dr. Kirkpatricks presentation to the Human Society of the United States all the way back in 1988 about how PZP, the fertility control drug now being used on many of our mustangs, was being developed - apparently Ms. Barringer doesn't read the NYT either.

While NYT is granting Alan Shepherd the credit for helping run the contraceptive program, they dubiously omit the fact that Alan Shepherd is actually a mid-level BLM employee with the current title of Wyoming’s Wild Horse & Burro Lead.

Mr. Shepherd is the same guy that told the Casper Star-Tribune back in 2005 regarding wild horse reproduction that “a 40% increase in a year is not unusual”. Yet the U.S. Geological Survey recently released a Report (1), which had to "...combine births and deaths, which is necessary because no data on these separate processes are available." In other words, BLM had no records of separate wild horse reproduction or mortality rates regarding Wyoming’s two largest wild horse herds, despite almost forty years of management.

Since Alan Shepherd is now being touted as "the guy" in the contraceptive program, it goes a long way towards explaining BLMs management and how America's mustangs and burros have now found themselves poised to receive a bullet to the brain since BLM became their stewards.
This article was dismally disappointing and is filled with so many gross distortions and misleading statements that there just isn't room to address them all!

While others may continue to cite the New York Times as a credible news source - and maybe that use to be the case - from what I’ve seen of their journalistic “integrity” through this article, I’m personally going to just chalk them off as nothing more than a glorified blog.

But that’s just my opinion…..

So what college did you earn your degree at to make you an expert?? Oh wait, should we being asking what High School you graduated from or did you even graduate??? That's right, you past the GED on the second try....

I have been reading a lot on this topic and in these tough economic times, a large number of individuals, business and the federal government are hurting. So it is no wonder a federal agency which has never received the funding it needs, is struggling to make ends meet.

For those (like me) who love wild horses, it is time for us to step forward with ACTION! All it will take is 30,000 passionate people to adopt a wild horse. Problem solved.

Big business - the cattle industry has always wanted to get rid of wild horses on what they consider their grazing lands. Big businesses have big money that buys people in the US government. This country is not for the people by the people. It is run by the top money people pulling the strings in government.

Oh, and this is my opinion, and I am free to have an opinion no matter what my education level.

Here is the problem with that argument...Congress has provided for many uses on public lands not single uses. In passing the Horse and Burro Act, Congress underscored their intent that horses were not to be managed in areas as a single use, but as one of the many uses. In other words, Congress intended for H&B to be part of the pie, not the whole pie, and not even half of the pie. It is also interesting to note that permitted livestock use has declined by more than 50% (in Nevada) since the H&B Act passed in 1971. And during this same period, H&B have never been at the proper number, nor have they been in balance with the other uses. But that's just my opinion -- based on the facts.