This is the second in a four part series, which attempts to highlight two of the root issues in the long-standing war on America’s mustangs and burros, which continue to be used as the hammer to prevent their rightful place in the American landscape. 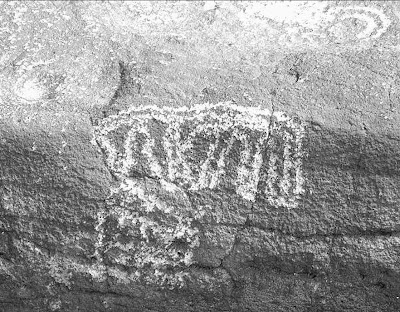 “Wildlife” means any wild mammal, wild bird, fish, reptile, amphibian, mollusk or crustacean found naturally in a wild state, whether indigenous to Nevada or not, and whether raised in captivity or not”.
Definitions
Nevada Department of Wildlife
While many involved in public lands and species preservation turn a blind eye to the quite arguably native status of equines in North America, it has been repeatedly documented by those focused towards truth that politics, not science, is the big influence in land and species management.

The quotation used above is taken directly from the Nevada Department of Wildlife (NDOW) Nevada Hunt Book, 2008 Hunting and Trapping Laws and Regulation for Big Game, Furbearer, Upland and Game Waterfowl, pg. 67, and apparently applies to every species except,

A wild horse or burro…..

When BLM filed a application with the Nevada State Engineer regarding their intent to provide well water for the few remaining wild horses in the Red Rock Herd Management Area after they had been denied access to the majority of springs, NDOW filed a Protest.

According to the Protest, it was NDOW’s contention that, “The assertion that beneficial use is wholly for wildlife implies that wild (i.e. feral) horses and burros are wildlife.” They went on to say, “Clearly, in no manner have "wild" horses been classified as wildlife under Nevada Revised Statutes. Therefore, the Bureau's water application should list the beneficial use as livestock and the well development would be for stock water.” (Click Here for NDOWs Full Protest).

What makes this even more hypocritical is that NDOW is aggressively involved in supplemental water developments, not only in Nevada, but in other states too, to expand and increase available habitat for big game species even though the “thriving natural ecological balance” could not support these species or their population targets without them. Nor does NDOW reveal that these supplemental water sources are responsible for altering the natural ecological balance they insist wild horse and burro use must rigidly comply with.

Through their constant big game species introductions, increased wildlife population targets, which in turn impacts habitat and resource availability and increases competition with the free-roaming herds, their liberal water supplemental policies are often found to be at the very root of species resource conflicts that is then blamed on the “feral” herds. Check out the big game water developments on this map as of 2002. 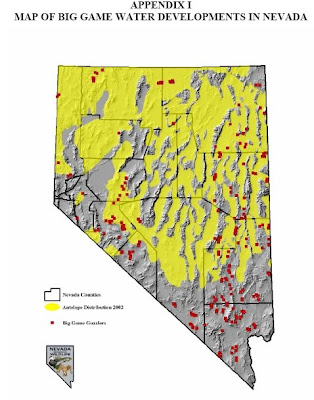 While noting that the supplemental water would be of benefit to small wildlife species in the Red Rock HMA, the main thrust of their argument was ~ it failed to benefit mule deer or bighorn sheep. Their Protest also references the “dangers” of increased wild horse and burro use to State Protected Species, which is made all the more ironic through their referencing of Nevada Revised Statutes (NRS), as wild horses and burros are a State Protected Species through NRS 504.430 to 504.490 that continues to be ignored. (By the way, NRS Chapter 504 is titled "Management and Propagation ~ Wildlife Management Areas" and all the NRS governing "other" wildlife species come under this chapter with Wild Horse NRS's falling right between the middle of it all).

To illustrate how much has changed over the last twenty years, below is a map showing pronghorn antelope distribution in 1983 (highlighted in orange) and antelope distribution in 2002 (highlighted in yellow). Currently, just the Nevada pronghorn population target of 25k is greater than the national allowable management level set by BLM for wild horses throughout the entire West and NDOW is considering boosting it again to 28.5k. Wonder if this has anything to do with the non-stop round ups over the last eight years... 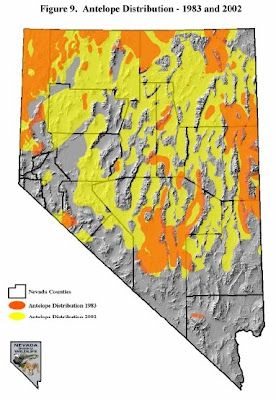 While arguments are continually lobbed at the public that the non-native wild horses and burros have few natural predators and whose unmanaged populations can spiral quickly out of control, a study done in 2004 by W.P. McCrory for the Friends of Nemaiah Valley found some very interesting results in a relatively untouched and remote area in the Brittany Triangle in Canada.

The Rainshadow Wild Horse Ecosystem’s Conservation Assessment preliminary findings revealed much of what is occurring to America’s herds is the result of manipulated management actions that have disrupted the natural ecological balance while simultaneously insisting that this manipulated system is natural - just another absurd double-standard foisted upon our wild herds.

Some statements of interest in the Rainshadow Conservation Assessment include:

“I could actually find no negative biological rationale (e.g. range damage) not to recommend this. (in reference to declaring the Rainshadow Wild Horse Ecosystem as western Canada’s first wild horse refuge.) I would caution, however, that some management issues need to be addressed as part of an overall protection package…”

“It is interesting to note, however, that the feral horse is now so far down the totem pole in the Cariboo – Chilcotin that a recent detailed “problem” analysis by B.C. Environment on grassland biodiversity in the region failed to acknowledge that the wild horses even exist and were once present in quite high numbers (Hooper and Pitt 1995).”

“As noted by Hooper and Pitt (1995), separation of feeding niches by wild ungulates is well documented on the Serengeti Plains of East Africa and that positive interactions among herbivores are commonly believed to occur in many grassland ecosystems.”

“While detailed research is needed to more carefully quantify possible over-grazing competition between feral horses, wild ungulates and domestic cattle, I saw limited evidence of over-grazing during our field surveys. The most damage I observed was being caused by cattle to riparian habitats on private land holdings in Elkin Creek.”

“Perceived problems associated with the potential for over-population and over-grazing by feral horses in the Chilcotin appears to be a persistent concern that has received little documentation and study…..”

While there is no question that wild horses and burros have the potential to cause rangeland degradation through overpopulation, this fact holds true for any species.

In the Fish Creek Rangeland Health Assessment in 2005, bighorn sheep were noted as the only source of riparian degradation in Ice House Spring #3 and BLM noted elk were destroying the sole riparian area in the Rattlesnake grazing allotment since 2002 but as of 2007, nothing had yet to be done about this. (Click Here to see photos of more “native” damage to watering sites).

NDOW actually has a special fund set aside for “elk damage” in Nevada and issues checks to compensate for their destructive impacts on private land (this program is also mandated through NRS) but no record has yet been found to determine if checks are issued for damage to public lands.

Yet in today’s culture, everything is in a name, isn’t it?

*Wildlife bred, born and raised via human intervention are branded “introduced”. Wild horses and burros untouched by humans for generations are branded “feral”.

*Bringing wildlife to an area they haven’t lived in for decades is branded “historical re-introductions”. Removing wild horses and burros that have lived in an area for centuries is branded “returning the area to its Preferred Natural Community (PNC)”.

Water hauling policies approved by the Secretary of the Interior for wild equids is only allowed until they can be removed.....

To view some of these policies in current action, Click Here to see how BLM just recently approved zeroing out 1.6 million acres of wild horse and burro habitat that just happens to be smack dab in the middle of the Lincoln County Elk Management Plan, all part of their "Partnership Projects" with NDOW. Includes a map of "habitat enhancing water developments" for big game species while limitations on water were cited as one of the major reasons behind BLMs decision to zero out the herds.

Posted by Preserve The Herds at 2:32 PM