While government officials, big game specialists and some environmental experts continue to harass and eradicate federally protected free-roaming wild horses and burros under the guise of equines being an exotic species that endanger the “natives”, one doesn’t have far to look to see this rhetoric completely fall apart as their lies and true intent is reflected in the management of the undisputed native American bison.

Once estimated as 60-90 million strong and the central figure on the Department of the Interior’s Seal, the last free-roaming herd of buffalo has been crammed into the imaginary boundaries of Montana’s Yellowstone Park and apparently, even this last herd is only tolerated to promote a tourist attraction (similar to what Nevada State Senator, cattleman and hard core sagebrush rebel Dean Rhodes proposed for our free-roaming wild horse and burro herds). Any attempts by the buffalo to follow traditional migratory routes outside the Parks boundaries are greeted by officials with hazing, capture, and slaughter due to their “excessive” numbers.

The fabrications used to slaughter wild bison are just as hollow as those used against free-roaming wild horse and burro herds. Their justifications for buffalo slaughter are asserted with the same unquestionable authority with Park and state officials going back on their word, time and time again as they seek only to appease livestock and big game interests, treating the public as nothing more than a nuisance.

Currently, National Park Service is engaged in the biggest buffalo cull and slaughter of the decade with almost 1,200 buffalo being butchered just since November to prevent them from leaving the Park.

Officials claim that buffalo can transmit a disease to local cattle called brucellosis but there has never been one recorded case of transmission from buffalo to cattle ever happening in the wild.

In case you missed that the first time, let me repeat this. There has NEVER been one single recorded case of a brucellosis transmission from buffalo to cattle in the wild! Yet somehow this absolute fact is completely ignored as officials continue to use it as their justification to slaughter Yellowstone Parks bison to protect the cattle industry.

The same cannot be said for Montana’s free-roaming elk population, recently estimated at up to 160,000 and well-documented carriers and transmitters of the disease. This fact is also ignored by officials and illustrates the point of how much power Montana’s Fish & Game Department actually has and where the priorities are for “our” habitat and species specialists.

If that wasn’t enough to drop your jaw, try this one. The Buffalo Field Campaign, protectors and stewards of this last free-roaming herd of America’s bison have recently reported that the current buffalo slaughter is aimed at protecting 12-16 cattle that can be vaccinated against brucellosis – that’s it, barely a dozen cattle with the majority of the locals protesting National Parks Services continued eradication of these beautiful and iconic creatures.

Taxpayer funded, government approved, here is just a tiny piece of what has been going on with Yellowstone’s buffalo behind the tourist scene.

Last year, the Buffalo Field Campaign issued press releases on May 9th and 10th regarding Park officials hazing of the migrating buffalo stating: “Pregnant bison and day-old newborns, as well as other bison, were run off of public land in an aggressive manner by agents on horseback and a DOL helicopter…. One baby bison fell injured and sick from the aggressive and relentless nature of today's hazing operation…The bison, with numerous calves, were run for over 8 miles without rest, food or water.”

As the BFC crew tried to film what Park officials were doing to the bison, here is what happened.

“The second BFC volunteer, Dan Brister, was arrested minutes later while attempting to document the bison crossing the highway…….These arrests were the result of an overzealous law enforcement officer interfering with our rights to videotape a government operation," said Brister. "I complied with his orders, did not resist, and still he arrested me and used excessive force, tackling me to the ground." 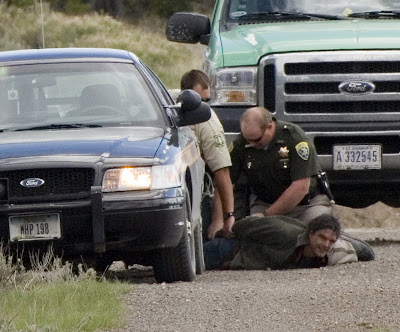 Photo by Barbara Michelman-Courtesy of Buffalo Field Campaign
Copyright 2007-All Rights Reserved
"The rights of American citizens are being infringed upon…Government agencies are ignoring the voice of the American people and acting as rogue entities who answer to no law but their own." Buffalo Field Campaign - May 2007

In a more recent press release, BFC has reported that over 20,000 people have contacted government and state officials requesting an end to the current tactics and have presented real, viable solutions to allow buffalo to migrate undisturbed and free from slaughter. Yet, again we find our public servants completely ignoring the facts or the solutions as they pursue their single-minded course of “destroy non-revenue generating species” - native or not!

This is just the tip of the iceburg - the facts and stories of what has been really going on with America’s last remaining free-roaming bison herds have been well-documented by the tireless efforts of the Buffalo Field Campaign volunteers.

The BFC has recently put out an urgent call for people to get involved, to help, to speak out, and to stand strong to protect the last of these gentle natives from continued senseless slaughter. To learn more about America’s last remaining free-roaming wild bison herds, please go to:
Buffalo Field Campaign – Click Here

If this is how the last remaining herds of the “native” American bison are treated, what are the chances for our wild horses and burros?
Posted by Preserve The Herds at 12:07 PM