In October 2007, BLM released a round up plan for the Nevada Wild Horse Range horses to finally reduce this last, greatest herd to merely 300. This proposal also had plans to possibly include 75 geldings as part of the 300 wild horses BLM would allow to remain yet BLM postponed issuing a final decision in favor of other round ups in Nevada. It is now tentatively scheduled for December 2008.

BLM estimates around 1,200 wild horses currently roam Nellis. Why so many? Because BLM has yet to remove any wild horses since approving the lower wild horse populations that ended their reign as the largest free-roaming wild horse herds in the West.

Also, it was only after all the changes were approved that results from genetic tests were finally published, which determined the Nellis wild horses had strong Spanish Mustang ancestry, a rare genetic trait now extinct in Spain and listed as threatened among historical breeders.

At one time, cattle were allowed to graze much of the wild horse range and BLM reports that until the late 1970’s, 6,000 to 8,000 cattle grazed in the ranges of Nellis. By the mid-80’s, almost all livestock grazing had been revoked due to military concerns and only a very limited amount of grazing is still authorized. Though small, BLM was required to include information on this livestock grazing when they evaluated the area for appropriate wild horse use back in 2003.
Look at the stark contrast in attitude between wild horses and livestock as BLM writes: (1)

Livestock Grazing Management, page 4-9: “The springs and riparian areas are the most important resource, and could be protected with exclosures. Water could be piped outside the exclosures to ensure animals have adequate water supply, therefore not needlessly suffering from severe thirst.”

Yet when it comes to wild horses needless suffering from severe thirst BLM writes under Unavoidable Adverse Impacts, page 4-14, “Fencing spring and riparian areas would have a direct impact on wild horses that frequent the areas. Some springs would be closed off and no water provided for the horses. There is direct benefit to fencing the spring area to improve the quality of the water and riparian habitat.” 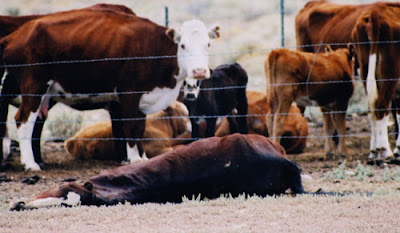 Water has become the hammer and BLM is fond of quoting the lack of it as the reasons for all they do.

What they don’t tell us or try to hide is, buried in their dusty archives are decisions issued like the one above, consistently removing access to any water sources wild horses and burros need to survive while finding ways to redirect it to livestock and big game animals instead.

When BLM redrew the new boundaries for the Nellis wild horses, they removed water sources. They told the public they would apply for water rights on wells the wild horses could use instead but those plans have merely sat on a shelf with BLM reluctant to even discuss the issue, despite emergency removals conducted last summer due to lack of water. BLM planned on repairing water developments long past functional use but those too are still on hold.

In May 2007, United States Fish & Wildlife and the military were proposing to fence every single water source on the entire range, over 100 of them, with no wild horse access while the fences would still allow big game animals in reported as continuing to flourish and expand throughout the area.

The 2004 decision stated wild horses would have 14 out of 20 known springs they could still use but by October 2007, BLM stated only 5 were providing any water at all.

When recently pressed for answers and accountability to these “management plans” that have failed to materialize and have caused “needless suffering from severe thirst”, BLM has now proposed drafting a Herd Management Area Plan to outline new strategies for the Nellis herds and a series of unconfirmed rumors about what direction BLM intends to go with these plans have started to fly.

This has led to a moral dilemma. If American Herds reports “rumors”, will credibility be lost? Will letting people know what BLM may be planning for our wild horses cause BLM to change their secret plans? Provide fuel for their ever-popular“overly-emotional-lack-of-objective-data-hysteria-corp’s-wild-horse-advocates” propaganda and spin they depend on so heavily?

Yet so much is done in secret, done so fast, done without the public having time or resources to challenge them once the wheels are set in motion, it is almost impossible to stop them once they begin executing their strategic plans - knowing what to look for when the time comes may be invaluable to the people who care about preserving this oldest and greatest wild horse range.

So in keeping with Las Vegas tradition, American Herds is going to gamble, spread the rumors, see what sinks or swims. The lives and future of our wild horses hangs in the balance and they are worth the risk.

Rumor #1: BLM has already released geldings back out on the range but has yet to approve this through any formal process. It was a quiet experiment BLM is now getting ready to officially act on.

Rumor #2: BLM will propose managing geldings on a permanent basis on the Nevada Wild Horses Range in their upcoming Herd Management Area Plan. Once approved (which is expected to be guaranteed), BLM will never have to include the fact that they are and will continue to castrate stallions and return them to the range on Nellis in any and all future round up proposals. BLM will merely make a vague reference forevermore by citing something like, “Wild horse removals and returns will be conducted in accordance with the strategic plans outlined in the Herd Management Area Plan approved in 2008”.

Rumor #3: A wild horse advocate attended the recent National Wild Horse & Burro Advisory Board meeting in Tuscon, AZ and has sent a message of concern and questions about what was being proposed for the Nevada Wild Horse Range. Efforts are being made to get more information but the rumor is…

BLM is considering completely zeroing out the entire reproductive herd and replacing them exclusively with the geldings now being held in long-term containment facilities in order to reduce holding costs. Once introduced, the entire 1.3 million acres could technically become available for long-term free range “holding” of these geldings.

The catch? No public access due to high levels of military security measures, no independent census or counts of the geldings being shipped into the base, no possibility of tracking them and no way of knowing what is happening once they have been shipped to this “forbidden zone”.

Nellis is one of the most restrictive areas in the wild horse and burro program and for decades has been plagued with rumors about wild horses being used for target practice, poisoned water holes, and internal lotteries awarded to the most proficient marksman.

If BLM chooses to eliminate the functioning herds and uses this place to ship our geldings instead, in essence, they will disappear from the wild horse and burro program, known only by an unverified number BLM writes on their annual reports.

So let us all hope that every one of these rumors turns out to be just that – merely a rumor and BLM will choose to step up to the plate and finally provide the water they promised so long ago for the Nellis wild horses instead.


Photo of "Dead Horse" may be used for educational purposes as long as American Wild Horse Preservation Campaign is credited as the source.

Posted by Preserve The Herds at 12:32 PM

Cindy, please keep posting EVERYTHING you hear--rumors or not . We cannot be too cautious. Now the BLM Advisory Board seems to be up to no good. How can we get the minutes of the meeting without waiting until they are approved?