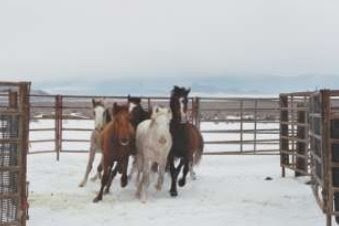 Another wild horse capture plan is in the works, this time for the Fox Lake Range Herd Management Area (HMA) in Nevada.

Last gathered in January 2005, BLM removed 370 wild horses and supposedly left 137. Yet in another Ground Hog Day moment, BLM has conducted a “new” census in December 2007 that found 331 wild horses still in the area.

Despite admitting BLM really didn’t know what the Fox Lake wild horses reproduction rate actually was, they went ahead and added a standard 20% population increase to the directly counted 331 wild horses in December, bringing the grand total up to 394.

Of course, this is way over AML (as usual) and as usual, wild horses must be immediately removed to protect the drought stricken range with a capture plan tentatively scheduled for July.

But back to the Ground Hog day moment…..Has anyone else noticed that prior to almost every wild horse or burro round up, a “new” census discovers way more animals than BLM knew about or has been reporting?

Or maybe that many wild horses aren’t really in these areas; BLM is just padding the numbers to make it seem like an emergency to remove them.

Or maybe what special agent in charge of BLMs law enforcement division in Santa Fe, NM, Dale Tunnel said all the way back in 1998 is really true – BLM brings in wild horses from one area to another to justify round ups. (Click Here to read, The Horse Rustlers: How Scam Artists Abuse A Federal Adoption Program For Wild Horses by Wendy Williams, 1998)

Of course, that’s just too “conspiracy theory-ish” to possibly be true, even if it was BLMs own law enforcement officer making such an outlandish claim!

It surely must be a coincidence that the Jackson Mountain HMA found 850 more wild horses than BLM knew about due to a “new” census right before the round ups, and the Antelope and Antelope Valley HMAs, where emergency round ups were conducted last November to prevent “catastrophic loss of life” (despite removals conducted in 2002 and 2005) jumped from 319 to 1,181 in just three years!

The Bald Mountain HMA went from 379 last year to 607 this year, the Callaghan HMA should have been 542 but instead the population is now estimated as 995 and the White Mountain HMA in Wyoming, also rounded up last November, skyrocketed from 295 to 817 between 2006 and 2007 due to a “new” census too.

Two livestock allotments occur within the Fox Lake Range Herd HMA, Pole Canyon and Rodeo Creek, but BLM claims Pole Canyon has been under non-use status with no livestock grazing since 1986 because a grazing management plan in 2000 stipulated a fence must be erected first. The fence was finally put up last summer and grazing may now again be authorized for the Pole Canyon allotment.

Curiously though, according to grazing records, BLM authorized grazing in the Pole Canyon allotment starting March 1, 2006 through March 2016 with three different use times; 501 cattle from April 1st through July 31st, 250 cattle August 1st through September 15th, and 397 cattle September 16th through October 31st of every year. The 2000 decision that BLM claims prevented grazing until the fence was erected also issued a zero AML for any wild horse use in the Pole Canyon allotment.

The current capture plan presents two options:
Alternative A - 315 are expected to be captured, 270-275 will be removed, 40 will be released and 122 are expected to remain post-capture due to all the wild horses BLM will miss during the helicopter driving. The terrain is cited as too steep to conduct water trapping so helicopters will be used.
Alternative B – Wild horses won’t be removed, the range will continue to deteriorate and this alternative is illegal so BLM can’t choose it, they just included it for comparison purposes.
The Preliminary EA can be viewed by Clicking Here.