A Slight of Hand 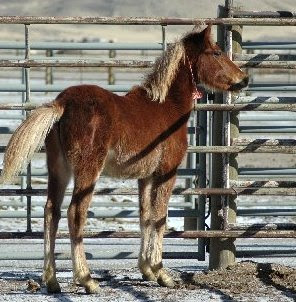 This is Part I of a six part series on the newly approved Ely Resource Management Plan, which permanently eliminated almost 1.6 million acres of habitat and over a dozen wild horse Herd Management Areas in the Fall of 2008.

With the public’s eye now directed towards the hand of Mrs. Pickens generous offer to negotiate possibly saving up to 30,000 American Mustangs and the million-acre deal their lives depend on, public attention has been successfully diverted to what BLMs hand has been doing in the Ely District in Nevada.

Specifically, I’m referring to the almost 1.6 million acres of wild horse and burro habitat that just disappeared after almost 40 years of being legally reserved for their preservation and protection.

The planning area use to allow wild horses and burros on 5.4 million acres but what amounts to yet another acreage heist from our wild herds, BLMs newly approved Resource Management Plan (RMP) kept the focus on the 3.7 million acres that would still be “managed” while downplaying the fact that almost a third of the entire planning districts wild horse and burro acreage was being eliminated.

In these modern times where urbanization and habitat fragmentation is profoundly affecting all species, what’s an acre worth these days?

According to the new Ely RMP, an acre is worth a whole lot if it doesn’t concern wild horses or burros!

While BLM was smoothly justifying the removal of their 1.6 million acres, the well-worn double standard was being played out again against America’s Mustangs and Burros as BLM legally contracted this deal for other wildlife in the new RMP.

Under the section General Wildlife Habitat Management (Aquatic and Terrestrial), page 2.4-14, BLM states: “Mitigate all discretionary permitted activities that result in the loss of aquatic and priority wildlife habitats by improving 2 acres or comparable habitat for every 1 acre of lost habitat as determined on a project by project basis.”

BLM then references four maps that specify what “kinds” of wildlife these priority species cover. Anybody care to take a guess what species are the lucky recipients of BLM’s 2-for-1 acreage deal?

Surprise! The lucky winners are elk, pronghorn antelope, mule deer, and bighorn sheep as BLM threw their multiple use mandates to the wind and added 1.6 million more acres of public lands to be monopolized by livestock and big game.

For now, the issue is acreage and in the interest of fairness, even if BLM tried to figure out how many acres were actually lost in order to replace them, the task would probably be impossible as the acreage records are so skewed, even the Government Accountability Office (GAO) threw up their hands!

So while BLM is laboring over the GAO’s mandate to “figure it out” once and for all, and God only knows how much more acreage is going to magically disappear in this process as they attempt to set the record straight after almost 40 years, here’s a look at what BLM is up against.

In February 2008, the BLM Wild Horse and Burro National Program Office reported the Herd Management Areas (HMA) listed under the Ely District’s jurisdiction equaled 5,518,194 acres of both BLM controlled and “other” acres. Of this acreage, 5,452,428 acres were cited as public lands exclusively under BLM control, a difference of 65,766 acres.

Further research revealed the disparity in acreage didn’t stop there. Examining a variety of official BLM documents regarding wild horse and burro management since 2003, more discrepancies were found and the simple truth is, only one BLM document reported the same acreage as another at any point in time for the twenty-four HMAs under the Ely Districts jurisdiction.

Of the 24 Herd Management Areas the BLM Ely District use to manage, alternative documents could not be located for 4 of the HMAs. However, comparing acreages of the other 20 HMAs, the reported acreage totaled 4,557,086 acres versus the 4,401,700 acres reported in the Ely Resource Management Plan. In other words, when the Ely RMP was published, 155,386 acres of wild horse and burro habitat failed to be included and instead, magically disappear from their previous documents and records. Photo is of a wild horse taken from the now zeroed out Clover Mountains Herd Management Area.

**BLM gave two different acreages for the Clover Creek HMA in the Ely Resource Management Plan. Under Table 2.4-12, HMAs Dropped, BLM reported 33,100 acres while on Table 2.5-13, Herd Management Areas under the jurisdiction of the Ely Field Office, acreage was reported as 33,000 public acres.

Eric Clayton here. Just wanted to say thank you for the correction regarding my latest posting. I appreciate the clarification and will update the information accordingly later on this evening.

Thanks for all you do and helping everyone stay informed.