This Is Not A Democracy

The following comments were sent to the National Wild Horse and Burro Advisory Board from Susan of Chicago about the current situation facing America's wild horses and burros. 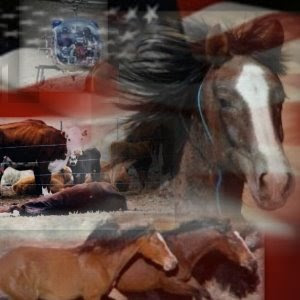 Comments to the BLM Wild Horse Advisory Board

I have respectfully submitted a series of questions in addition to my public comments on the situation to be addressed at the November 17, 2008 meeting. These are questions that directly relate to the discussion, and as a part owner of America’s federal lands, I would like addressed.

Although to be quite candid, BLM District Manager Jim Sparks may have already answered most of these questions when he made a statement at a public hearing in Billings, Mt. in September of 2008. When asked why further gatherings were being planned despite the fact that copious amounts of objective information had been supplied that refuted any immediate need for further gatherings in addition to a vast majority of public comments that opposed such action, he stated and I quote:

“This is not a Democracy”
This is a direct quote from the BLM!!!!!
1. So, does this statement represent how the BLM thinks? It certainly would explain volumes as to how the BLM manages the Wild Horse and Burro Program, with callous disregard for the spirit and intent of the law, catering to special interests, and capricious decisions that led to the current crisis in the program.

2. Why are only two alternatives proposed by the BLM, euthanasia and halting round-ups, to the issue of so many horses in long-term holding when many and advocacy groups and individuals welcome a dialogue with other pragmatic and humane suggestions? Could it be that “this is not a democracy”?

3. Even if the two proposals offered by BLM were the only alternatives and the budget crisis is so dire, why has the logical and practical alternative to halt gatherings not been implemented? The argument that the range cannot support the current horse population specifically in areas where there have been recent or soon planned gatherings, is purely insipid as independent range assessments and horse condition photographs in the public domain illustrate. So is the answer that “this is not a democracy”?

4. Is the purpose really to reach BLM determined AML levels?

5. If so, why is meeting a “so called” legal, but scientifically non-defensible AML level so important given years of legal disregard by the BLM in maintaining Herd Area acreage which have been systematically reduced to BLM convenient HMA’s?

Furthermore, what is the justification for the further capricious and unilateral reductions in HMA’s that has resulted in almost 20 million fewer acres for America’s wild horses and greatly contributing to thousands more wild horses in long-term holding ? For a majority of this acreage, only internally generated excuses from the BLM can be identified. Oh yes, according to the BLM, “this is not a democracy”.

6. Why does the BLM not consider independent and credible scientific evidence on genetically viable herd size when determining AML levels? Maybe it would be in a democracy.

7. Could it be that special interests groups that want to preserve their self-serving agendas exert influence over the administration and in turn the BLM? That seems plausible over the last eight years and would be easily understood if in fact “this is not a democracy”.

8. Why are concerns not addressed about the validity of statistics used by the BLM that are inconsistent with other bodies such as the US Geological Survey Biological Resources Discipline over counting techniques for wild horse populations? Because, this “is not a democracy”.

I see that the BLM “welcomes and concurs” with the conclusions. That makes perfect sense as the GAO study essentially parrots many BLM statements, arguments and recommendations.

This report is incredibly lacking in most every way including its stated purpose, its independence of fact finding, its accuracy of reporting, its inclusion of quantitative measures upon which conclusions are based, and the absence of critical facts needed to formulate, let alone reach, serious conclusions. If this matter were not so critical to the fate of the America’s wild horses that are deemed to be protected from abuse and death under the WFHB Act of 1971, it would be laughable.

The points raised in my above questions highlight the many short-coming of this report which clearly was designed to mis-lead and obfuscate essential truths of the current situation.

It could not be more obvious that there is something very suspicious about this report in that it appears to be written by the BLM itself. It is a sad fact that the title of the report; Effective Long-Term Options Needed to Manage Unadoptable Wild Horses, does not even match the request of June of 2007, by Committee on Natural Resources Chairman, Nick Rahall, and others asking that the GAO conduct a comprehensive review of “the BLM’s management of wild horses and burros on public lands”. The GAO and BLM are trying to avoid accountability by addressing only the existing budget crisis, not how it came to be. In this way, the conclusions reached simply and feebly try to address what to do now that over 30,000 wild horses are in long-term holding and expenses are rising. The requested study should have objectively analyzed why this situation truly evolved into what it is now.
As a part owner
of America’s wild horses,
we all should be outraged that the
BLM could suggest and behave as if
“this were not a democracy”.

Sincerely,
Susan /Chicago, Illinois
Ed Note: As one read Susan's points, one cannot help but reflect how the American Mustang is once again showing us the way the "New World" is being pioneered and settled. If we no longer have a democracy, what is "it" we are spreading, what are our children really bleeding and dying for and why is it more important that a foreign country have what we ourselves cannot?
Posted by Preserve The Herds at 1:31 PM

I agree with you. Your blog is great!
They captured more than half our wild horses and wanted to kill them. OMG. I hate the Republicans more with each passing day and I'm so glad they are toast.