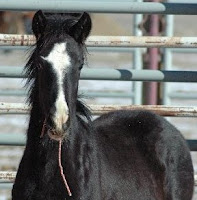 A recent series of posts regarding BLMs newly approved Ely Resource Management Plan, which eliminated almost 1.6 million acres of habitat and over a dozen wild horse Herd Management Areas in the Fall of 2008 was originally intended to be limited to a series of six. However, surprise, surprise, something new popped up…

Apparently, big plans have been in the works for many of the wild horse Herd Management Areas in the Ely District, much of it affecting many of the now zeroed out “unsuitable” habitats.

In December 2008, two new massive proposals were released by the BLM and U.S. Fish and Wildlife Service (USFWS) in partnership with the BLM, which are currently open for public comments.

Southeastern Lincoln County Habitat Conservation Plan
USFWS has just released a Draft Plan to help mitigate impacts to wildlife and Threatened and Endangered Species as a result of booming development now on the horizon in the Southern Lincoln County Area.

The groundwork for this plan actually began in the good ole year of 2000 and it references the planning efforts of the new Ely RMP occurring at the same time, though it is apparent this was written long before the current plans release last month as it only references the 2005 Ely RMP with “projections” of the Proposed RMPs release in 2007; no mention of its approval in August 2008.

Spanning several hundred pages, it describes the new plans “Purpose and Need for Action” as; Need for Incidental Take by Lincoln County, City of Caliente and Union Pacific Railroad, which in essence means these three entities are getting the rights to “incidentally” destroy habitat and species alike of the Desert tortoise and Southwestern willow flycatcher. The proposal covers almost 1.8 million acres.

It also includes various legislative histories affecting the area such as the Lincoln County Land Act of 2000 and the Lincoln County Conservation, Recreation and Development Act of 2004 as well as myriad of other lesser but still important plans cranked out by the Nevada Legislature, the County Commission and various local bodies.

The $47 million dollars gleaned from lands sold on February 9, 2005 through the Lincoln County Land Act was of particular interest as well as the descriptions of how these funds are to be distributed. The breakdown goes like this:

5% for the State of Nevada for use in the general education program of the State, 10% for Lincoln County to use as determined through normal County budgeting procedures, the remainder to be deposited in a special account to the Secretary of the Interior to be available as follows; Inventory, evaluation, protection, and management of unique archaeological resources; Development of a habitat conservation plan in Lincoln County (perhaps that’s were the money came from for USFWS to contract the whole proposal to ENTRIX, Inc), Reimbursement of costs incurred by the BLM when they sold the land, processing public land use authorizations, and acquisition of environmentally sensitive lands (think this is what will fund the 2 for 1 acreage deal wildlife got in the new Ely RMP that somehow wild horses and burros were excluded from?)

The Lincoln County Conservation, Recreation and Development Act of 2004 had a similar breakdown of disbursements of funds but no actual dollar amount was included.

Once approved, it will rule the roost for the next 30 years and what is glaringly apparent is, the “need” for this proposal and its associative agreements are necessary because of the massive amount of development coming on line in the area. What a coincidence....

Ely Energy Center Draft Environmental Impact Statement
This second monstrosity is about building and operating a coal-fueled electric plant north of Ely and the obvious miles of transmission lines necessary to bring it to Las Vegas.

BLM is projecting an impact of almost 14,000 acres, a drop in the ground water known as "drawdown" by at least a foot for at least 84 miles surrounding the plant, two feet of drawdown to impact springs, streams and lakes around the area, eight active water rights expected to include a drawdown of between 5 to 10 feet predicted (is that why the Ely RMP was based on “watershed” – because they knew they are about to lose a ton of it?), 81 acres of Desert Tortoise habitat permanently eliminated, as well as affecting up to 51 grazing allotments and 10 Herd Management Areas (except this proposal is also outdated as it fails to incorporate all those new HMAs just created and still uses the now zeroed out ones).

The impacts to the wild horses and their Herd Management Areas were barely a blurp on the radar screen but after diligent digging, here is what was found buried on a map buried in the back. Click Here to view.

The energy transmission lines from the South Plant site will skirt the outside of the Butte HMA, run smack dab through the middle of now zeroed out Jakes Wash HMA, barrel through the zeroed out White River HMA, clip a portion of the now zeroed out Seaman HMA, veer East to run right through the middle of the Dry Lake HMA, oops, excuse me, the Silver King HMA, shoot between the Rattlesnake and Highland Peak HMAs, most of which had the majority of their acreage eliminated from further “management”, skirt the outside boundaries of the now defunct Applewhite and Delamar Mts. HMA, where a segment veers off through through the Southern half, heads near the Meadow Valley Mountain HMA (also zeroed out to protect the Desert Tortoise) and re-aligns again to the main transmission line that lumbers towards Las Vegas to reach the Harvy Allen Substation.

If BLM chooses to go with the "Alternative Northern Site", throw in the Antelope HMA too as the coal plant will actually be in the HMA at its western edge (anybody finally see a connection between that 69k acres BLM removed from the Antelope HMA without rhyme or reason and the “emergency gather” last year?)

As one unsuspecting Nevada rancher told a wild horse advocate recently when asked how they acquired such a beautiful piece of property, the rancher replied with a wink and a grin, “The secret is getting rid of the horses”.


Southeastern Lincoln County Habitat Conservation Plan
The actual link to USFWS website and full proposal can be found at the bottom of the Dear Interested Party Letter. Comments are due by February 18, 2009 and can be mailed or faxed to: Nevada Fish and Wildlife Office, 4701 North Torrey Pines Drive, Las Vegas, NV 89130 or faxed to 702-515-5231. Please refer to EIS filing number DES08-39 when submitting comments.

Ely Energy Center Draft Environmental Impact Statement
Comments will be accepted for 90 days following the publication of the Notice of Availability in the January 2, 2009 Federal Register and will be accepted until April 3, 2009. Comments may be submitted in writing to: Ely Energy Center EIS, Bureau of Land Management, 702 N. Industrial Way, HC 33500, Ely, NV 89301 Phone: 775-289-1800. Electronic comments may also be submitted to EEC EIS@blm.gov


Photo of Dry Lake Wild Horse captured in December 2006.
Posted by Preserve The Herds at 4:08 AM

I have yet to sit down and read all the parts to the Ely Resource Plan, but I plan to soon. In the mean time, someone posted this link on a Kiger board and I thought you might enjoy it. Mustangs as they should be. Wonderful pics. Enjoy. http://www.flickr.com/photos/24688219@N07/show/

Thanks for sharing Water Bearer! Beau-tee-ful...