Kick It Up A Notch 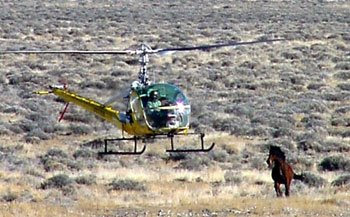 Since we are on the subject of BLM contracts and potential “conflicts of interest”, here’s another issue wild horse advocates have been urging BLM to address; the almost exclusive contracts awarded to the guys flying the helicopters that capture our wild horses and burros.

The two heavy hitters in the “removal business” are Cattoor Livestock, Inc. and KG Livestock, also known in the wild horse and burro circles as ‘Cook and Cattoor’. These two companies are the predominate contractors BLM and other government agencies (such as U.S. Fish & Wildlife) use to remove wild horses and burros across the West.

Cattoor Livestock, Inc.’s website has an entire section devoted to the commendations they have received for their work with the first letter they have posted written by none other than Velma Johnson, aka, “Wild Horse Annie” herself. Those praising Dave’s work also include the International Society of Mustangs and Burros, the Billings Field Office regarding the Pryor Mountain wild horses and a whole host of various officials praising their humane handling and techniques. Click Here to view.

According to government records, since 2000, Cattoor has netted over $13.4 million dollars(1) and Cook/Heaverne over $6.8 million dollars(2) for removing wild horses and burros from public lands.

While both contractors are used extensively, Dave and Sue (that’s his wife) are often interviewed because of their involvement in the Wild horse and Burro Program and the removals they perform, such as the recent Reno Journal Gazzette article about the removal of 460 more wild horses in Nevada where Dave stated, “These horses are dying out there and we’re not taking care of the problem”. Click Here to see photos of the dying horses on the drought stricken range.

Dave’s got a lot to say about the Wild Horse and Burro Program. He expresses his views on the condition of the range, the need for the removals he has made such a handsome living off of, how well they treat the foals during the removals as well as many choice tidbits about special interest groups needing to back off the BLM, leave them alone to let them do their job and lies being circulated on the internet stating contractors and BLM do not want and sometimes do not allow people to watch wild horse round ups. Dave even references a September 2007 round up in Colorado as evidence that these “lies” just aren’t true!

By the way, that Colorado round up was the source of a filming project David Glynn was part of. Mr. Glynn posted an article about his experience during the removals titled, “Ten Days in Disappointment Valley” and here, Dave and Sue Cattoor are just as candid about their opinions as they are on their website and as Mr. Glenn pointed out in his accounting, “they are strong advocates of killing, in their words “a humane way to dispose of excess horses” and support the Burns Amendment”.

Dave’s not shy either about advocating “humane destruction” in any fashion as is clearly evident on his website as he discusses the “welfare sanctuaries”, aka, long-term holding facilities, how no one wants them, how these now captured wild horses are “unusable” and if not adopted, should be put down.

It’s also apparent Dave’s a big fan of horse slaughter as he also takes the time to discuss his views on how the horse slaughter ban effects wild horses, which includes how BLM will be negatively impacted by increased competition in the market place and he even provides a link to “The Unintended Consequences of a Ban on the Humane Slaughter (Processing) of Horses in the United States”. If you have the stomach for how "humane" American horse slaughter was, check out Animal Angels' recent release of hundreds of photos taken at our American horse slaughter plants by Clicking Here.

From here, Dave leads right into the question, “Was Dave Cattoor convicted of a felony?” as he offers his explanation for how he, Cliff Heaverne and four others were involved in “conspiracy and use of aircraft to capture wild horses and aiding and abetting” in 1990 and offers to provide any court documents to those interested regarding his involvement.

It’s good to know Dave is so forthcoming about this and willing to provide us with the real story. So to help everyone out and save anyone who may be interested the trouble of having to contact Dave personally, Click Here to review one of these court documents, which lists the charges behind what led to the “said wild, unbranded horses to be sold and shipped by truck to Great Western Meats in Morton, Texas, to be slaughtered and processed.”

Since there’s an interest in getting both sides of the story, while Dave’s website offers the public a variety of photos about wild horse round ups and the range, here’s a pictorial report that offers a slightly different version of wild horse round ups compiled by a group of horse advocates regarding some of the issues being raised about Cook and Cattoor titled, “The Use of Helicopters to Remove Wild Horses & Burros From Public Lands”, June 2007. This pictorial includes comments and testimony presented to the BLM at their legally required annual review regarding the use of helicopters to capture wild horses and burros. Click Here to view and wait for it to download.

It is also interesting to note that some of the very issues brought to BLMs attention over a year and a half ago highlighted in the report above are still being reported as occurring during the round ups, as this recent revealing American Wild Horse Preservation Campaign Testimonial, “Colorado, 2008 – Government Contractor Exposed, Part 2” by Carol Walker, clearly shows. Click Here to view.

“JoLynn Worley, a spokeswoman for the bureau’s Reno office, said the contractor who conducted the roundup, Dave Cattoor of Nephi, Utah, was used by the agencies even though he pleaded guilty and was sentenced for hunting wild horses with aircraft during a 1990 wild horse capture near Duckwater Indian Reservation, 80 miles west of Ely.”

“While convicted, that does not preclude the fact he does excellent work for us”, Worley said.
Las Vegas Review Journal
Keith Rogers, 12/28/93
While BLM has explained that Dave Cattoor has “paid his dues” and Dave himself offers his explanation as to why he was convicted of mustang hunting, conspiracy, aiding and abetting and is very open with his opinions regarding the need to humanely kill unwanted wild horses (after all, everyone is entitled to their opinion), what’s your opinion about Cattoor Livestock, Inc. and Cook/Heaverne’s almost exclusive multi-million dollar contracts with BLM to round up America’s mustangs and burros posing a “conflict of interest”?

There is a special place in hell for these men, and the many unknown / unnamed, who have been in cahoots with them for years.

How any official would think that the American public would ever knowingly agree to pay these butchers anything - much less nearly 20 million dollars combined is incomprehensible!

In wiser days in this county, horse thieves were hung. Now the American people are being hook-winked into paying millions of their own tax dollars to people who are stealing the American publics’ horses for their own personal greed, using straight-out lies and misrepresentation of facts and science. And this progress?!

Here is your chance to make an impact on the new Secretary of the Interior, who CLAIMS, he is going to clean up the Dept. of Interior.

If enough people scream about this injustice – he M I G H T see it as a potential embarrassment to the agency, under his watch, and do something about it.

Great article! I'd like to ad that Velma Johnston "complemented Catoor on "bait and catch" NOT the helicopter round ups.....Wild horse Annie is turning in her grave.....considering what's going on today!