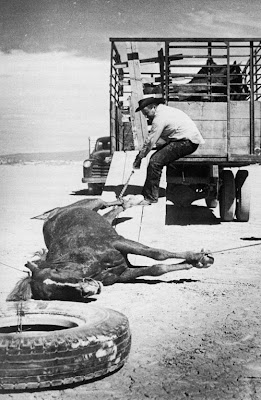 An Executive Order was issued by President Bush on August 18, 2007, that directed federal land agencies to work with state governments, state and federal wildlife agencies, and consult with a Sporting Conservation Council, which includes such heavy hitters as the National Rifle Association and Safari Club International, for the sole intent of establishing a preference in all management actions that will prioritize big game hunting opportunities at the expense of all other uses on federal lands.

Jeff Ruch, Executive Director of Public Employees for Environmental Responsibility, PEER, a nationwide association of government workers in natural resources agencies was quoted as saying, “This is political meddling posing as a conservation policy and reads like it was written by a lobbysist”. (1)

Former big game management plans and introductions have rarely impacted livestock grazing or their allocations on public lands but have often resulted in devastating impacts to wild horse and burro allowable population levels - consider it the newest way wild horses and burros are being “hunted to extinction” in the West.

Most big game species have already been issued special management designations such as Priority, Special Status, or Sensitive Species categorizations that result in wild horse and burro populations being subordinated to these prime hunting species. Despite their federally protected status, many wild horse and burro herds have been totally zeroed out for exclusive big game use and expansions.

The Muddy Mountain Herd Management Area, located near Lake Mead in Southern Nevada, was zeroed out for all wild burro use in 2005 (2), and the BLM removed the last remaining burros in March 2007. Meanwhile, the area is touted as Nevada’s second largest hunt unit for big horn sheep, a tall dollar hunting species with BLMs most recent plans to manage for a big horn population of 505 adults within the same area deemed “not suitable for wild burro use”(3) So much for the florishing population of over thirty years and the "thriving ecological balance".......

The 1999 Lincoln County Elk Management Plan in Nevada plans to manage for a population of elk that exceeds wild horse populations by 3-1. (4) Curiously, no reduction in livestock was implemented to accommodate the elks forage needs but in 2003, a couple of hundred horses suddenly became too “excessive” for the range to support through a mass “appropriate management decision" for twelve Herd Management Areas in the elk planning area. (5)

Southern California’s last herd of 29 wild horses were zeroed out in 2004 to “protect” big horn sheep, the Clark Mountain burros along the Southern California/Nevada border, a documented 400-year old herd and one of the last remaining wild burro herds in the entire state of California, was also zeroed out this January. One of the major reasons cited as supporting the decision to eliminate them was the allocation of water for exclusive bighorn sheep use. (6)

The controversial and historic Sheldon Refuge wild horses and burros are being targeted for unfair management practices in favor of valuable “native” hunting species. Refuge managers state the need to protect big game species as the priority, citing the Refuge’s primary purpose was established to protect and preserve pronghorn antelope. However, a lot has changed since the 1930’s when national pronghorn estimates hovered around 26,000. (7) Today, Nevada’s pronghorn population is estimated at 23,500, the highest ever recorded (8) and in 2002, the nationwide pronghorn population was estimated at over 600,000. (9)

If you just look at the surface, it seems like a good idea. Why wouldn’t we want more big game species on public lands? They are beautiful to watch and hunting is a very popular past time for many Americans. But if one digs a little deeper, it becomes apparent, it’s not about wildlife, it’s about hunting revenue and lots of it!

In 2005, one fund raising event raised over $2.2 million dollars during the auctioning of twenty big horn sheep hunting tags. The highest tag commanded a stunning $199,000 in Arizona and second place went to New Mexico for a cool $177,800 - not the kind of cash the average American citizen can afford to pay for this elitist privilege. (10)

A study done in 1996 analyzed the economic impacts of hunting and estimated that if the hunting “industry” was measured as a corporation, it would be listed as number thirty-five in the Fortune Five Hundred List with an estimated nationwide economic impact of $61 billion dollars, created household incomes totaling $416.1 billion, roughly equivalent to twenty-five percent of America’s entire military payroll and contributed $1.7 billion in federal income taxes, which equated to almost half of the entire federal budget for commerce (11).

Those statistics are over ten years old and big game populations have continued to rapidly increase.

So the next time you are wondering where all the wild horses and burros have gone, check your big game statistics. You will probably find they were introduced and are being managed under the radar, so to speak, through a helpful little technique often employed by government agencies called, “Categorical Exclusions”, which allows our public servants to make back room deals without going through lawful evaluations and presentations to the public. This also re-allocates critical resources such as food and water once reserved for wild horses and burros to big game species instead.

As for President Bush’s newest Executive Order, it would appear he intends to continue to use whatever means available to circumvent Congressional intent and public laws in order to further the exploitation of our resources for the benefit of the few. The chances of this new Executive Order seriously affecting mining, oil and gas, timber harvest, or livestock operations are negligible, as these uses have also been issued a top priority status in public resource management by him and those in his administration.

So what other management considerations will this affect besides the last remaining wild horses and burros of America? Perhaps we should ask Congress…..

Posted by Preserve The Herds at 8:48 PM

This is dispicable! We must expose this, our governments secret agenda behind the removal of Americas wild horses off of federal lands. Its not just about cows anymore!

You are so worried about a species of animal that shouldn't even be there to begin with. Hunting or not the big horn sheep, elk, deer, and any other grazing animal native to these lands should not have to compete with a ferrel animal. These horses and burros do not belong there and are consuming precious resources needed by the native animals.

Useful information shared. I am very happy to read this article. Thanks for giving us nice info. Fantastic walk through. I appreciate this post.
horseback hunting