Yesterday, Betty Lee Kelly of Wild Horse Spirit, Ltd. visited BLMs Palomino Valley wild horse and burro holding facility in Northern Nevada due to an outbreak of salmonella that has claimed at least 130 wild horses since the outbreak began.

Symptoms included diarrhea and death but when questioned about the number of wild horses that might be affected, Neill’s only reply was “cultures have been taken on several horses”.

Despite their current condition, it is unknown if wild horses may still be shipped to other facilities such as the Carson Prison or “elsewhere”.

Cattoor Livestock Roundups was the contractor used for the Jackson Mountain wild horse removals and questions about Cattoor’s trailers being sanitized since discovering the Salmonella outbreak were also met with uncertainty.

On viewing the corrals, it was noted that a high proportion of foals and very young horses were completely alone. When questioned where their mothers were, Neill’s only reply was, “Some were not able to be connected back up to their mothers.” Many of these foals appeared to be four months or under and there’s additional concern that many of them may be too young to survive on their own.

The following photos were taken yesterday at the Palomino Valley facility around 11:00 a.m. BLM staff was still in the process of cleaning up and pictured here is a foal that had expired only moments before the forklift came to “dispose” of the body. 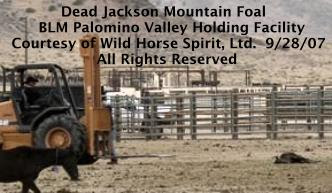 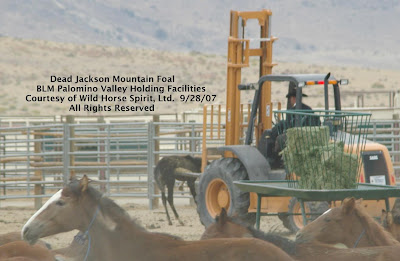 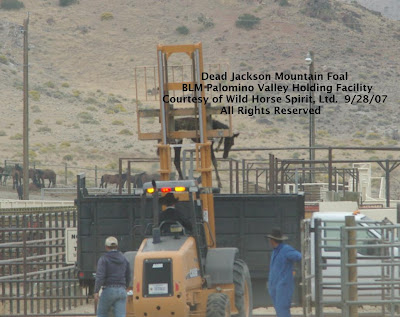 An extremely weak foal - will she make it? 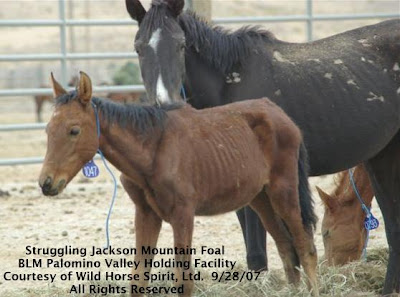 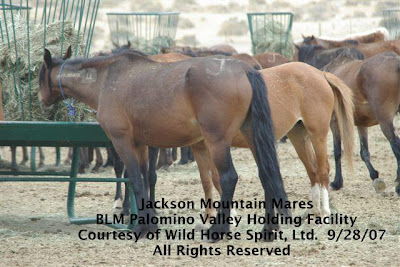 A great big special thanks goes out to Wild Horse Spirit, Ltd. for sharing these pictures with all of us and for trying to get answers on what is really happening at the BLM Palomino Valley Holding Facility and this newest tragedy for America's wild horses.

Posted by Preserve The Herds at 8:02 AM