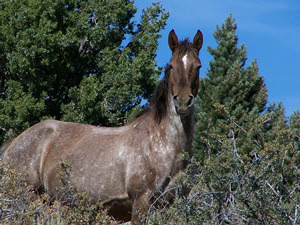 Here are some excerpts from a recent article published by the Natural Horse Magazine, Volume 9, Issue 5, authored by Wildlife Ecologist, Craig C. Downer.

Mr. Downer is a long time wild horse advocate and has spent years extensively observing and fending for the wild horses and other grazing animals in their natural habitat.
He has had several articles published as well, “Wild Horses: Living Symbols of Freedom”, whose Forward was personally written by Velma B. Johnson, (Wild Horse Annie) and his most recent work includes a 341 page, photo illustrated book of poems entitled, "Streams of the Soul" that devotes a section to wild horses in their wild state.

Mr. Downer received his A.B. in Biology in 1972 at the University of California at Berkeley and his M.S. in Biology in 1976 at the University of Nevada in Reno. He has extensively traveled Europe, the Middle East, India and Nepal as well as in the United States, Mexico and Canada. He has worked as a wildlife biologist in the Cauca Valley in Colombia, South America and is currently working to save the Endangered Mountain Tapir through the Andean Tapir Fund, which include efforts to establish a Reserve in Northern Peru.

Theses excerpts are from a speech Mr. Downer gave along with a slide presentation on June 14th, 2007 at the Carson Valley Museum and Historical Center in Gardnerville, NV, as part of the inauguration of the Mustang Exhibit he also helped prepare.

The Past, Present, and Future Status of Wild Horses:
An Indispensable Challenge of Our Times
Why has there been such a huge reduction in the wild equid herds? Grasping the history of “civilization”, the answer should not be surprising, but it should be disgusting! Humanity has spread its exploitation of Earth’s natural ecosystems in a very thoughtless and insensitive way and even such magnificent animals as the horses and burros who have long served man have not been exempt from his vicious and ungrateful treatment. Among the primary culprits in wild equid elimination has been the plundering mentality of the livestock culture, which has devastated millions of square miles throughout the world; and any species that has stood in its way has been violently combated and destroyed. But by no means is the livestock culture the lone enemy of wild equids. The hunting establishment has also targeted them, since they are not a game species. They do so in spite of the fact that wild equids ecologically complement rather than compete with deer, antelope, bighorn, and many other species, when man allows their ecosystem enough space and freedom to naturally adapt, interrelate, stabilize and evolve.
The huge reduction of the wild equids to their present level of a little over 20,000 nationwide is especially due to the power establishment’s having targeted these noble and ecologically fitting animals for practical elimination. The politicos, including those in academic circles, have outrageously lied about these species, concocting negative propaganda and using them as scapegoats for ecological problems that people – not horses and burros – are responsible for.
This is what makes the current attitudes toward and treatment of the naturally living horses and burros so utterly reprehensible and requiring of our immediate attention.
While the arrogant and ruthless livestock culture rapes the natural ecosystem to feed an unwholesome appetite for meat and other animal products, and leaves desertification in its ever expanding wake, the returned native wild horses restore the North American ecosystem, seeding its native plants and building the vital humus component of its soils, acting as a natural prey species for native predators such as puma and wolf, and in countless other ways enhancing the biodiverse life community.
Yet this regretful situation must not be taken as an excuse to give up. Far from it! We champions of the wild equids, as our exemplars: the wild equids themselves, must be like beacons of light in a dark and storm-tossed sea, showing forth the way to lost ships groping hither and yon. The Wild Horse Act still remains intact! The legal herd areas still are legal herd areas, even if largely empty or populated only by token, non-viable populations. These populations can recover! A caring America can restore their rights in the ecosystems where they are an ancient yet ever self-renewing and evolving part. Think about it: their future is our future, for when we abandon their cause, their freedom, their land, we also abandon a very special and essential element in our very own. For to this degree are the lives and destinies of horses, burros and their kindred linked to those of man. Their true home is a free home, not that of some mere prisoner or slave in a world made prison both by, and ultimately of, man himself!

To view Mr. Downers article in its entirety, go to - http://www.naturalhorse.com/wildhorses_part2.php
"Streams of the Soul" is available at-
www.publishamerica.com/books/10040
To Preserve The Endangered Mountain Tapir, go to-
http://www.andeantapirfund.com
Photo 6. Head mare of a band and mother of colt above.
All Rights Reserved - Courtesy of Mr. Downer
Posted by Preserve The Herds at 5:17 AM

Mr. Downer touches on a serious malady with which humanity has inflicted itself for thousands of years, "MEAT EATING".However, this "sacred cow" (no pun intended) has been glamorized to the point where one of the symbols of the "good life" is a "good steak".
This indulgence has been a prime contributor to many of the worlds ills. One could go on and on about the evils this "habit" causes, from deforesting the Earth for Big Macs to overcrowding the hospitals with colon cancer patients to contributing to mankinds agressive behavior, which eventually leads to wars. The true cost of this "addiction" is much, much higher than the already exorbidant price at the "butcher" store.
The eradication of native species can never be reversed. WE MUST NOT LET HORSES AND BURROS JOIN THAT LIST!
A place to start addressing this problem might be to start calling it what it is "FLESH EATING". Try pondering that point for a while just before you slice into your next "good steak".(read thick, juicy slab of flesh) You just might find your appetite diminishing.
The truth is there is no such thing as a "good piece of flesh". It's not "just a hamburger" it's a "ground up piece of charred flesh".
Interesting side note: the number one thing people choke to death on is...well you already know the answer. Please don't be one of them.