It's A Beautiful Day In The Kudrna 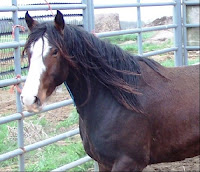 Reportedly, the new owner is a very wealthy developer out of Reno, NV that has urged the BLM to modify the current grazing system. The BLM Winnemucca crew (see last post) has been happy to oblige by proposing a new system that allows 800 cattle to roam year round gradually increasing the forage (AUMs) for livestock by approximately 33% versus the old system that fluctuated between 344 and 1,188 cattle depending on the time of year.

Again, BLM outlines guaranteed forage for livestock and big game animals but no mention is made of food (AUMs) for the wild horses in the area. BLM acknowledges the new system will significantly increase competition for food and water with the wild horses and burros, especially during drought or harsh winters, as they will have to survive on what the wake of cattle leave behind. The only question that remains is, which “Emergency Gather” reason BLM will use later to preserve the thriving ecological balance? The always handy “Save Them from Starvation” or the ever popular “Drought-Lack of Water”......

If that wasn’t enough, in order for the new system to work, another fence must be installed near Idaho Canyon, which is already surrounded on three sides - the new one will box it in completely. As a result, wild horses may become trapped during the winter, possibly causing them to freeze or starve to death.

No worries though, BLM has a PLAN! The protection of these horses depends on BLM making sure the gate is opened before it is too late (these are the same people that came up with this idea) or the new owner, Kudrna, can do it too.

In case anyone wants to know how Kudrna feels about wild horses, they kindly posted it on their website, http://www.soldiermeadows.com History Section, under the title, Help Needed, which is a request to write Congress and Legislators to remove wild horses from the area and contains such choice statements as-

Fortunately, the area won’t ever be horse free because Kudrna plans on raising domestic horses and the Soldier Meadows Guest Ranch includes four wheeling, SUVs and OHV use anywhere with special emphasis on hunting the “wildlife” the wild horses and burros threaten.

Meanwhile, back at neighbor Sheldon.....
Yesterday, the United States Fish & Wildlife released their new Draft EA for Horse and Burro Management at the Refuge, thanks to the lawsuit filed by In Defense of Animals (IDA) http://www.idausa.org/ who had the courage to speak “truth to power” by insisting USFWS follow the laws. The Draft EA can be accessed at http://www.fws.gov/sheldonhartmtn/sheldon/horseburro.html
and public input must be provided by September 26, 2007.

For a graphic expose on last year’s disastrous wild horse “management” at Sheldon, please visit American Wild Horse Preservation Campaign, Learn More, Reality of Round Ups, Sheldon-2006-Attempt at a Cover Up at http://www.wildhorsepreservation.com/testimonials.html

So let’s all go see what neighbor Sheldon is planning now…….
The photo used is of one of the "thousands of unmanaged, unchecked feral horses" removed by BLM in December 2004 from the Calico Herd Management Area in Nevada.
Posted by Preserve The Herds at 3:51 PM

This new owner of Soldiers Meadows ranch is a lying bigot concering the wild horses. He must not be allowed to have his greedy and violent way with the wild horses!