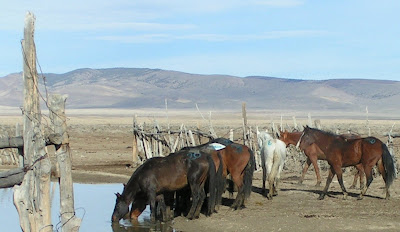 According to BLMs final reports, 27 wild horses either died during the capture operations or were shot by BLMs contractor under their euthanasia authority during the recent removals in the New Pass/Ravenswood and Augusta Mountain Herd Management Areas conducted this last November in Nevada.

Despite this, Battle Mountain Wild Horse & Burro Specialist Shawna Richardson expressed the same bubbling optimism that is becoming a trademark of those involved in Nevada’s wild horse and burro program by stating, “I am very pleased with the overall outcome, as well as how the gather progressed and how the numbers etc., came out.”

A total of three horses died during the capture operations - all causes of death cited as “unknown”:

a) On November 8, an old bay stud refused the trap and was roped. Once roped, the horse collapsed and died. Cause unknown, heart failure suspected. BLM personnel did not observe any adverse actions by the crew that would have led to the horse’s death.
b) On the same day, a 3-4 month old bay foal was unable to keep up with the herd when being brought to the trap. After the adults were trapped, the crew went to retrieve the foal on horseback. It was walked to the trap where it collapsed, seizured and died after being administered electrolyte and a foal supplement. The crew stated that the foal may have been sickly, mentally impaired, or an orphan. The pilot stated that the foal kept tilting its head from side to side abnormally during the gather.
c) On November 10, a foal died after being roped in the wings of the trap. The foal had lagged behind the herd when brought to the trap. One of the crew attempted to rope the foal as it ran into the mouth of the wings. At the same time, the foal collapsed. The foal’s legs were tied to keep the foal on the ground briefly as another group of horses was brought to the trap, and was found to be dead minutes later.

The other 24 wild horses were shot by the contractor, Cattoor Livestock Round Ups, 13 of which were destroyed exclusively because BLM stated they were exhibiting a body condition score of 2 (on a scale of 1-10) and were incapable of maintaining this body condition in its “present environment” – most of those destroyed were over 20 years old with four of the mares estimated at being 30 years or older.

While other wild horses shot were also cited as exhibiting these body conditions, other physical deformities were also given as reasons for the euthanasia's including swayback, clubfoot, blindness, being crippled and an eye infection in a foal that failed to respond to treatement.

BLM states that after being destroyed, the Augusta Mountain wild horses, who had the highest number of cited Class 2 body conditions, were buried on private property - so if anyone would like to verify that these horses were indeed shot on the range versus loaded up in a slaughter truck, it will require a search warrant to access the burial site. The New Pass/Ravenswood wild horses were left on the range to decompose naturally.

In BLMs Closeout Report for the New Pass/Ravenswood HMA, BLM reported that, “The horses brought to traps 1 & 2 during the first 3 days of the gather were the thinnest captured. Most mares were on the lower end of condition class 4 (moderately thin), with a few near class 3 (thin).”

The final Close Out Report for the Augusta Mountain HMA, where the greatest number of wild horses were put down due to low body class condition, has yet to be issued.

In the “Emergency" Environmental Assessment BLM sent out, they stated many wild horses in the area were thin and exhibiting signs of stress due to the prolonged drought. The above photo above was taken on 11/09/07 at the capture site of these same wild horses.

This is a photo of wild horses removed in from an emergency gather conducted in the Montezuma Peak Complex HMAs in 1996. Instead of being euthanized as these recent horses were, they were transported to the New Pass Ravenswood HMA instead. 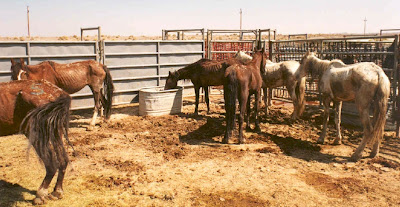 Until 1998, Congress forbid BLM to destroy wild horses and burros on the range, even though euthanasia was authorized in the 1971 Wild Free-Roaming Horse & Burro Act. Then the National Wild Horse and Burro Advisory Board stepped in and recommended reinstating this authority and BLM has been authorizing their destruction via national annual memos ever since.

The authority to destroy the New Pass/Ravenswood and Augusta Mountain wild horses was cited by Nevada’s Wild Horse and Burro Lead, Susie Stokke under a memo whose authority expired on 9/30/07 with no new memo yet being issued. When this was noted, BLM was quick to point out that their authority was already granted within the Act and BLMs policies.

So now we find BLM assuring us that destroying our horses and burros has always been the case and it would appear that the motion by the National Wild Horse & Burro Advisory Board to recommended reinstating BLMs Euthanasia Authority, as well as the annual memos that authorize their destruction, were merely an unnecessary waste of time and paper.