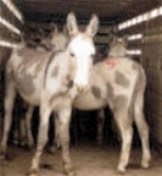 The Bureau of Land Management Richfield Field Office in Utah is accepting public comments and input on a Draft Resource Management Plan until January 23, 2008 and it is highly recommended that you take a moment out to show your support for wild burro preservation!

A Resource Management Plan (RMP) or Land Use Plan (LUP) is the most complicated, extensive and powerful document the BLM publishes, averaging about 1,000 pages each, and presents various alternatives that the public can comment on to help decide what will be the priority values for the “planning area”. Once done, a process that often takes 2-3 years to complete, the RMP will become the guiding foundation and basis for all legal arguments, land use entitlements, and management of public resources over the next 10-30 years.

However, the public is given a very narrow window to participate - 90 days is the general allotment - and if you fail to provide input during the “Draft” period, you are then legally barred from challenging or questioning these plans again!

The Richfield Draft RMP is presenting an extreme range of choices, varying from making oil, gas and mining the top priorities to shutting down much of the area for environmental protection.

The BLM oversees a rare herd of wild pinto burros in the Canyonland Herd Management Area, one of only two burro herds in the entire state, and they are considering raising the “allowable management level” of the herd to a range of 120-200 wild burros in two of the Alternatives being considered.

The catch? The best Alternative for the Canyonland burros is also the one that has the strongest protection for all wildlife and their habitat – Threatened and Endangered Species, Special Status Species, Priority Species and yes, big game such as bighorn, elk, pronghorn antelope, mule deer and even bison – but the burros will be at the absolute bottom rung of the “priority ladder” unless we demand more protection for them than BLM is offering!

Over the years, this has become a very common ploy used by environmentalists and big game enthusiasts who pander to the publics desire to see public lands pristinely preserved - wild horses and burros are easily picked off once “other wildlife” is given the priority status for an area.

This is done through a myriad of ways; from fencing wild horses and burros out of water sources for exclusive use by more important species, by transferring critical land and water to agencies that aren’t legally required to preserve the herds, by declaring an area a special protected habitat called an “Area of Critical Environmental Concern" (ACEC), or by merely issuing “authoritative statements” supported by old and biased studies that claim wild horses and burros are causing “rangeland degradation” and threatening those species. (These studies are often written and funded by big game specialists who want wild horse and burro habitat to expand big game populations without causing conflict with local ranchers - of course, the general public has no expertise or authority to challenge their conclusions.)

To make matters worse, while the BLM constantly beats the “thriving ecological balance” drum as justification for constantly removing wild horses and burros, neither BLM, United States Fish & Wildlife Service (who oversees Threatened & Endangered Species), or State Wildlife Departments are required to report the populations of those species wild horses and burros are removed to “protect”.

For example, the Mexican Spotted Owl will be considered a top priority in the Alternative that will help the Canyonland wild burros the most; the owls will get a certain percentage of habitat declared an ACEC through this Alternative and this area will then be devoted almost exclusively for the owls protection in the Canyonland burros HMA. Once this is set into motion, if any agency declares the burros are causing the owls distress, the burros can then be reduced or permanently zeroed out for the owls protection.

Never mind that the last guesstimated count of the Mexican Spotted Owl was eleven years ago with an estimated population almost the equivalent of the ENTIRE wild burro population now remaining under BLMs “care” or that the owl has already been granted 8.6 million acres of protected habitat while wild burro habitat has been slashed again and again under this crafty strategy - merely 5.6 million is all that now remains.

This same strategy can be employed against the burros for any species protected under this Alternative’s “management plan” and it will include all big game species too! No current monitoring will be required, no reported populations of the species will be necessary - just “the word” issued from the experts and the burros can be instantly eliminated during the entire life of the RMP!

Because of this, it is imperative that the public demand detailed preservation plans be established now for the Canyonland wild burros and their HMA. This is the only chance the wild burros will have at legally establishing protections that will preserve them in the future!

If you’d like to help support the preservation of the Canyonland wild burros and their home range, Click Here to access an easy, copy-n-paste letter to send to BLM to let your voice be herd!

Comments must be submitted by
Wednesday, January 23, 2008

Email your comments to: UT_Richfield_Comments@blm.gov

Make sure you include your name and address and please remember all submissions and personal information may be made available in their entirety for public inspection.

To view the Plan, go to: : http://www.blm.gov/ut/st/en/fo/richfield/planning.html
Posted by Preserve The Herds at 3:27 PM