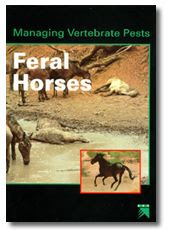 Over the last few months, Australia has found itself in the news again through a series of articles that has exposed plans to shoot as many as 14,000 wild horses or brumbies, as they are called down under, in order to protect Australia's native species and habitat.

After reading the most recent release, “Kill All Wild Horses In Australian National Park: Environmentalists”, I was drawn to philosophical musings……

First, there seems to be an amazing amount of similarities in contradictions with this article as those so often seen in American print when it comes to wild horses, burros and habitat.

The National Parks Association of New South Wales (an environmental group not actually associated with running the Park) declares: “the ‘brumbies’ have caused havoc in the Kosciuszko National Park” and have called for total eradication of the population to protect the native species.

Later in the article, Andrew Cox, the official spokesperson for the group, is quoted as saying, “It is very undisturbed. It is a very intact ecosystem”. (1)

It is estimated that about 1,700 “feral horses” now roam the 1.67 million acre Park and projections of 7,000 wild horses in ten years time is cited as the reason to begin the eradication program now to protect rare species of plants and animals listed for the area that occur nowhere else in the world.

In report after report, study after study, region after region and country after country, it all reads the same - there is no home for a wild horse or donkey - for as we are told, somewhere in their history they stopped being a species and have merely become a breed.

There is no resource they do not threaten, no species they do not endanger, no ecosystem that can withstand their impacts and “environmentalists” repeatedly call for their complete removal to protect the natives.

With no habitat to call home, they are always cited as “feral” in any area they now occur and their 56 million years of functional evolutionary coexistence on this planet is causally swept aside by those who demand pristine ecosystems free of all traces of human influence by removing the “feral animals”.

So today I ponder......what is a feral horse or asses crime that could cause such relentless persecution?

Perhaps for too long they have been held captive by man and as a result, have become tainted by their mere acquaintance with us – never native, always feral, they have become unclean like mankind itself and those that seek their complete eradication long for a place they can go that is unspoiled by our heavy footprints, our wanton destruction, our ignorance and lack of respect for the Earth and all her children – the other natives “feral” horses and asses are no longer a part of because of too much time spent with us.

Perhaps those that lobby for their complete absence seek a place they can forget about what mankind has done, what we are doing, longing to return to a place of innocence that is pure and natural, to connect with this majestic and magnificent planet in all its splendor and glory, desperately trying to run away from the ever-expanding concrete hives we have paved Her with as they try to pretend - just for a moment - that all is well in the world.

And then trots by the “feral” horse….. a reminder of a species we enslaved and forced to help us build the very things that now enslave us.

Perhaps there is jealousy that the horses and donkeys can still live for free, easily making almost any area "home" without having to pay their debt to society like the humans, livestock, or hunted animals must do.

Or maybe it comes from resentment and the fact that the truest “feral”, non-native, exotic species on the planet is mankind itself, as there is no natural habitat for us - no place to call home - only what we fashion and forge through stripping these very ecosystems now held hostage by our insatiable needs.

Perhaps because man has so readily bonded with equines, it is easier for those who cry for their eradication to project their own subconscious shame and participation in the destruction of our earth on the “feral populations”, hoping that killing “brumbies” or donkey’s can somehow quell the demons of their inner landscapes they are too comfortable to confront.

For now, I am only left to wonder…

As the ground soaks up the blood of the "feral" horses shot at Kosciuszko, their screams of pain finally falling silent and their rotted bodies eventually fading into history, will those that walk the grounds breath in the fresh air and smile at how peaceful everything looks, never wondering how the bones they step on got there?

I also speculate on the purpose of, “Kill All Wild Horses In Australian National Park: Environmentalists”, as it provides an inflaming title designed to invoke passionate reactions, spark controversy and add fuel to the already raging debate as the media defines the battle lines of our opposition for us in a predictable pattern of oppo-same drama.

Divide and conquer - the “environmentalists” and the “sentimentalists” – crafted to cleave us from each other by obscuring the heart of the matter and what matters to both sides most, the preservation and protection of life! As we point our fingers at each other, we both become easy prey for the exploitative agendas of those who really pull the strings.

(1) According to SOS News, Andrew Cox, also a member of the Wilderness Society, was a major architect of the 2000 Guy Fawkes wild horse massacre that resulted in the deaths of over 6oo wild horses being shot and left to suffer as they died. Mr. Cox is cited as continuing to be very instrumental in the advocating of killing Australia's Brumbys and their total eradication.

Posted by Preserve The Herds at 11:41 PM