Good to Be King 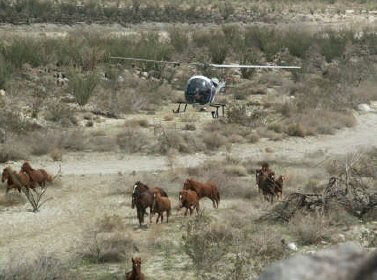 Since BLM and Congress are finally suppose to be listening to the public about the wild horse and burro wipe out, here is something they need to hear.

In 2003, twenty-nine wild horses were taken through yet another official declaration of yet another “emergency” due to starvation, drought and to prevent the inhumane suffering of watching them slowly die in an area that could not feed them. Click Here to learn more.

These were the Coyote Canyon wild horses, the last herd in Southern California and the last of their kind with their genetic test results showing strong Spanish ancestry, which means they had been living in the Canyon for a very, very long time. Of course, the results of the genetic tests were not released to the public until all the wild horses had been eliminated and of course, they weren’t starving at all as anyone can see by their round up photo here. Click Here to read about their final round up.

Once managed by BLM and protected by the Wild Free-Roaming Horse and Burro Act, the Coyote Canyon home range spanned both state and federal lands - but their “protected” habitat and status was traded away to the State of California, a now common-place move that is often behind the eradication of wild horse and burro herds. Click Here to read more.

Though almost all of these types of land transfers are still under federal agencies ruled by the Secretary of the Interior, the one Congress charged with the duty of protecting our wild heritage, the herds are only protected on BLM managed land. So…if government officials can transfer the land or just a little piece of it like a critical water source to another agency, even if it is still overseen by the Secretary of the Interior, the wild horses and burros and their home ranges suddenly become “unprotected” and disappear – no questions asked.

So here are a few questions somebody might want to ask NOW, while everyone is in a listening mood and a few are actually demanding answers!

“How much habitat, how many herds have been eliminated through this split jurisdiction”?

“How about ending this schizophrenic policy that allows the Secretary to authorize the elimination and/or shooting of wild horse and burro herds if they are not on BLM managed lands”?

The Sheldon wild horses and burros fall under this category as their home range and protected status was sold out to U.S. Fish & Wildlife Service.

The Havasu wild horse herds were eliminated in the Havasu National Wildlife Refuge to protect the “native” ecosystem and wildlife. Currently, lobbying efforts to eliminate the remaining Havasu wild burro herds are underway with officials using the same lines that Sheldon managers are using today to eliminate the Sheldon herds.
Here is what “protection” of the Havasu
ecosystem looks like these days …. 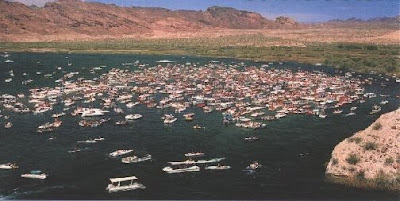 "Ecotourism is one method to derive economic benefits from the
conservation of wildlife and habitat."* 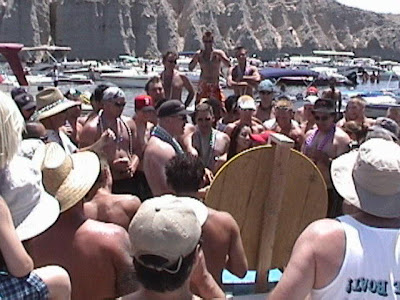 The Virginia Range wild horses, the original herds that spurred Wild Horse Annie to lobby for protection of these magnificent animals, also fell by the wayside as BLM couldn’t dump the Virginia Range land they inherited fast enough.

So too went all those “protected” wild horse and burro herds and their habitat in Southern California, which was transferred to National Park Service, leaving them and their home ranges suddenly defenseless. NPS still has a standing order to shoot those once “protected” BLM wild burros in Death Valley National Monument.

This is the way the California Clark Mountain wild burros went as well, whose genetic tests revealed they had the highest degree of “rare variants” of any wild burro herd tested throughout the West but who found their main water source in the hands of the Secretary of the Interior, only under a different agency name.

Zeroed out and the bulk of them removed in January 2007, the Clark Mountain wild burros had nothing left to drink as officials threatened to fence their only year-long water source of four centuries because…...the water was now to be reserved exclusively for the areas transplanted bighorn sheep.

Which brings us back to the Coyote Canyon wild horses, all twenty-nine of them, also removed for exclusive habitat use for bighorn sheep.

Last estimated at totaling 400 in 2007 just in the Anza-Borrego Desert State Park with 700+ counted throughout the entire range (now up to 800), Superintendent Mark Jorgensen recently admitted these bighorn were not the “rare” Pennisular bighorn sheep Park officials used as justification to help eradicate the Coyote Canyon wild horses after all (1), - just regular Desert Bighorn - whose western populations have now been estimated at reaching 70,000 (2). Of course, the fact that they weren't so rare after all wasn't revealed until after the Coyote Canyon wild horses were taken either.

It’s been five years since this historic herd was rounded up. Backcountry Horsemen of California (BHC), with the aid of California State Senator Bill Morrow, managed to fight Superintendent Jorgensen long enough to prevent the immediate castration of the remaining four Coyote Canyon stallions in order to preserve their unique gene pool. Apparently, Mr. Jorgensen had put out an order to castrate them as soon as possible.Click Here to learn more.

BHC then formed Coyote Canyon Caballos D’Anza (CCCD), a non-profit organization dedicated to restoring the herd and releasing them back into their native range in the Anza-Borrego Desert State Park. Manager/Director Robert Hayden of CCCD and his wife Kathleen, are currently the guardians of the last remaining Coyote Canyon stallions and have worked tirelessly, both on a state and federal levels, to restore this historic herd. 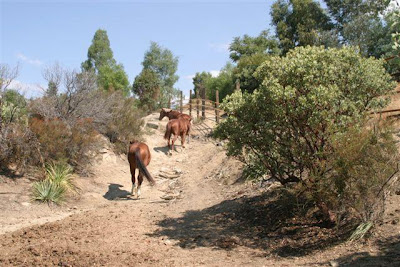 Three of the four Coyote Canyon stallions under
Coyote Canyon Caballos D'Anza stewardship.
In the spring of 2007, one of these efforts included an attempt to restore them under a Historic and Cultural Nomination, an effort Superintendent Jorgensen again successfully shot down. Click Here to learn more.

Turns out, Superintendent Jorgensen is a big fan of the bighorn but not of the “feral horses” and since he has all the authority, the influence, and access to all the “experts” - what he wants, he gets. It’s certainly good to be the King!

Coyote Canyon Caballo’s D-Anza’s most recent efforts include negotiating a sanctuary in the vacant Beauty Mountain grazing allotment adjacent to the Anza-Borrego Desert State Park - but they need some help. With all the preliminary groundwork done, once again, it has now come to begging “our” representatives to step in to provide oversight and a legal framework if this effort is to succeed.
Please consider taking a moment out to let your voice
be herd by writing:

Here is a beautiful sample letter written by Candace D. Oathout,
Chair of Citizens Against Recreational Eviction,
urging the restoration of this historic herd.
Click Here to read.

To learn more or help the CCCD in their long-standing fight to return this unique and historic Spanish herd of mustangs, contact:

- For the Coyote Canyon Wild Horses –
THANK YOU!

Get the cattle off of the land you are paid off to keep and give it back to the wild horses to whom it belongs. How dare the BLM round up horses and burros to be killed? They are a waste of taxpayers dollars as they DO NOT LISTEN TO THE WILL OF THE PEOPLE AND SHOULD BE put out of business as all THEY do is show IS selfish greed! The BLM needs to go as they are worthless!! They run by greed and money and nothing else!bubba2