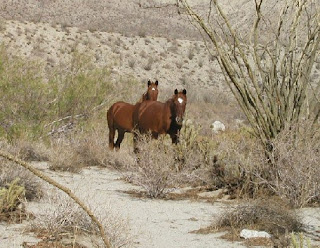 The Coyote Canyon wild horses, the last remaining herd in Southern California, were abruptly removed in 2003. Their federally protected habitat encompassed 23,260 acres (1) that was transferred from BLM to the California State Park systems and all previously guaranteed legal reservations were withdrawn; the horses were left to the mercy of the State and what mercy California has showed.

Hiring a group of UC Davis veterinarians whose paychecks are dependent on government funding, they lined up to testified to the poor conditions and inevitability of starvation of the centuries old wild horse herd, citing that to continue to allow these wild horses in the area would be “inhumane”. (2)

Yet while the wild horses were being captured, the cameras captured the truth and the wild horses of Coyote Canyon were gleaming, fat and healthy as they were loaded into the trucks for their final journey.

The National Historic Registry (NHR) recently denied a nomination for the Coyote Canyon wild horses to be officially listed as a cultural and historic value in the area despite testimony from a variety of experts that supported the nomination, including Dr. Thomas King, considered one of the leading authorities on the subject both in America and abroad, and has written much of the NHR policies that are in place today. (3)

Mark Jorgenson, Superintendent of the Anza-Borrego Desert State Park, was quoted in an article by Deanne Stillman and published by the LA Times Weekly as saying; “We wanted to get rid of them since the ‘70s.” (4)

Mr. Jorgenson was present at the NHR hearing with a battery of well-rehearsed sidekicks that successfully opposed the Coyote Canyon Wild Horses nomination through more official testimony.

The “expert” testimony that the Coyote Canyon wild horses were threatening the Endangered Peninsular bighorn population turned out to be false when DNA testing revealed that the bighorn were just plain old Nelsons; of course, this testing was only completed after all the horses were removed. (5)

This is the Advisory Board that is in charge of overseeing wild horse and burro preservation across the Nation due to laws and federal protection granted to our wild horses and burro that firmly established their historical and cultural significance to the American people.

It is not the Boards “responsibility” to investigate or support the preservation of the last remaining wild horse herd in Southern California based on their historical and cultural significance or their documented lineage of the now rare Spanish mustang.

Taxpayer funded, BLM appointed positions only, these are the experts and advisors that rubberstamp the hidden agenda of “managing ” wild horses and burros into extinction.

Photo taken from Kellys Weblog and Favorite Websites: The Wild Horses of Coyote Canyon that Once Were….(February 22, 2006) Not included in original article published in LA Weekly, February 01, 2006, Of Rocks, Creeks and Broom-Tail Horses, Deanne Stillman © www.deannestillman.com


Posted by Preserve The Herds at 5:49 PM

After 200 years of angry frustration, why do we Americans keep making the same stupid mistakes, over, and over, and over again?! Get those horses off of land controlled by THE GOVERNMENT , and on to PRIVATE land. People should pool their resources and create that reserve that is desperately needed. What is the Sierra Club doing these days, besides sitting around on its laurels?