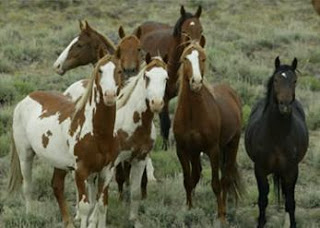 Sheldon Wild Horses
In May 2007, the Sheldon Hart National Wildlife Refuge located in Northern Nevada estimated that 1,500 wild horses were roaming the Refuge.

The May assessment reported severe overpopulation was destroying fragile ecosystems, threatening wildlife, creating hazards to motorists, and their sheer numbers had created a crisis of epic proportions that demanded immediate resolution through the removal of hundreds of wild horses.

Then came the lawsuit filed by In Defense of Animals against U.S. Fish & Wildlife Service that was based on the Services failure to provide any current information, pertinent scientific data, accurate reports, follow established laws, procedures, or to consider any reasonable alternatives within their “management plans”.

The Service presented one option and one option only – the wild horses and burros must be removed to dangerously low numbers before they completed any serious environmental evaluations in their development of the new management plan currently being drafted.

This is not the first time U.S. Fish & Wildlife has been sued for these very same violations and courts have remanded them before for attempting to pass off unsupported and unsubstantiated opinions as legitimate science.

After the lawsuit was filed, a new population census was done and low and behold, it is now believed that merely 800 wild horses and 90 burros inhabit the Refuge – a loss of 700 wild horses.

The Service theorizes that the 700 wild horses migrated outside Refuge boundaries over the winter and due to the completion of long over due fence maintenance, were unable to migrate back during the spring. If this theory is correct, the Service states that these horses will now be managed by BLM under the Wild Free Roaming Horse & Burro Act but at this time, it is currently unclear which BLM Herd Management Area the Sheldon horses may have ended up in.

The Service also stated that this is the first recorded incident of this possible migratory pattern, which leave us all wondering -

Just what it is they “monitor” when they report on Refuge conditions?


Jackson Mountain Wild Horses
A little over 700 more wild horses were recently removed than was originally projected in the BLM managed Jackson Mountain HMA, bringing the grand total of removals to 990 wild horses. BLMs Preliminary EA estimated only about 250 Jackson Mountain wild horses would need to be removed but a new aerial census conducted in June of 2007 revealed the population was much, much higher than previously believed.

BLM attributes the unexpectedly high population levels to wild horses that were driven outside the Jackson Mountain HMA during the February 2003 removals. It is believed that once the removal operations were complete, the wild horses again resumed residence within the HMA boundaries.

Kind of makes you wonder how far “outside” the HMA boundaries outside really was?

Posted by Preserve The Herds at 5:35 AM