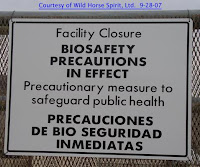 The BLM Palomino Valley Holding Facilities in Northern Nevada announced a thirty-day closure after 130 wild horses from the Jackson Mountain Herd Managment Area removal operations conducted earlier this month have died due to what officials are saying is salmonella bacteria. (1)

Salmonella is not uncommon in horses and they may carry the bacteria in their digestive track without becoming ill. However, when horses are in weakened conditions or are very young or old, they are more susceptible to succumbing to its effects.

Dr. Al Kane, veterinarian for the U.S. Department of Agriculture, stated that many were extremely weak from lack of food and water due to drought conditions and their weakened condition made them more susceptible to the bacteria.

There are further speculations as to why the Jackson Mountain wild horses have been hit so hard, which vary from contaminated water troughs, BLMs long disputed exclusive diet of overly rich alfalfa fed to wild horses and burros coming straight off the range, as well as the stress of being driven by helicopters during capture operations.

The BLM has no established limits on the distances wild horses and burros may be driven and there was significant public protest about this issue to BLM during Nevada's annual hearing on May 16, 2007 regarding the use of helicopters and motorized vehicles to capture wild horses but public concerns were ignored.

After conducting a thorough review of their Standard Operating Procedures (SOP), which lasted less than an hour, BLM responded to the variety of public concerns that everything they do is safe, humane and appropriate.

American Wild Horse Preservation Campaign rebutted BLMs "in depth" review by stating; "BLM conveniently omits injury statistics and is able to issue such low mortality rates because almost no deaths are deemed by officials a "result" of the removal operations. Many injuries/deaths sustained during round-ups are conveniently attributed to natural causes. Reports of horses that later have to be euthanized due to injuries sustained during capture are common."

Wild horses have often suffered outbreaks of strangles, a highly infections and serious respiratory disease that can kick in after being severely stressed, such as being driven for miles during helicopter captures.

In early 2006, forty-six horses died of strangles in BLM corrals located in Susanville, CA followed by a major outbreak of strangles in the Palomino Valley facilities in the fall and the Animal Welfare Institute stated in their recent book, Managing for Extinction that, "During the past two years practically every BLM facility has experienced similar disease outbreaks. Leading to the confirmed deaths of scores of animals...." (2) 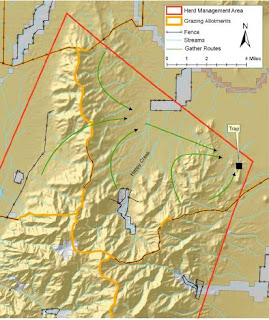 In July of 2007, a long list of questions regarding BLMs vague and undefined "policies" regarding wild horse and burro captures were submitted to the National Wild Horse & Burro Advisory Board with a personal copy sent to the representative for Veterinarian Medicine, Dr. Boyd Spratling of Nevada, which included:

* What studies have been done on the physical effects of driving wild horses and burros by helicopters?

*What is the absolute limits in terms of distance that wild horses and burros can be driven before physical damage begins?

*What are the temperature limits that should be followed? For example, running wild horses and burros at freezing temperatures? During extreme heat?

Wendy Krebs, Doctor of Veterinarian Medicine of Bend Equine Medical Center in Oregon reported foals from the June 2006 Sheldon roundups were found "lame due to excessive wear of their hooves, limb swelling and injuries and elevated muscle enzymes consistent with severe over-exertion" (4) 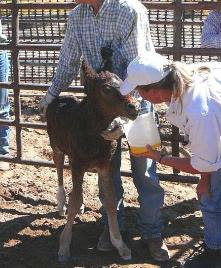 Almost 900 wild horses were captured in Wyoming this past January during temperatures so cold that the military was airlifting food for livestock into Colorado and 178 wild horses at the Nevada Wild Horse Range were driven during triple digit temperatures that were tying Nevada record highs.

To date, no attempt has been made to address the potentially fatal results of the Standard Operating Procedures (SOP) BLM employs during capture operations or the health conditions that often result. Why should they? There is no one they must answer to anymore.

The Jackson Mountain wild horses join a long list of other "non-capture related" fatalities, merely classified as a result of natural causes due to BLMs vague and undefined SOPs - Standard Operating Perils.

Posted by Preserve The Herds at 4:44 PM