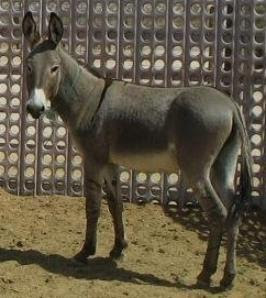 The Clark Mountain burros were one of the oldest and most unique wild burro herds in America. Living in relative isolation for four centuries, their genetic tests revealed the herd had a “high proportion of rare variants”. (1) Yet in January 2007, BLM issued the final orders for their permanent and irrevocable extermination.

The Clark Mountain Herd Area is located in Mojave Desert in Southern California near the Nevada border.

In 1994, with the passage of the California Desert Protection Act (CDPA), the burros only perennial water source was transferred to National Park Service (NPS) through the creation of the Mojave National Preserve. NPS then issued a General Management Plan declaring a zero burro management policy for the Clark Mountain wild burros. (2)

This transference of key habitat requirements such as water, access or land to other federal agencies not required to protect wild horses and burros is often found at the root of many herds being zeroed out and this trend has been accelerating.

At the time of passage of the California Desert Conservation Area Plan in 1980, there were 19 recognized Herd Management Areas that could be managed for burros and 14 were officially designated for that purpose within the Conservation Area alone. The combined allowable population levels totaled 2,747 wild burros and their available habitat was 3,500,465 million acres. (3)

Today, this same area has had over a 90% reduction in both habitat and population with only two remaining burro herds and an “appropriate management level” of merely 229 burros confined to less than three hundred thousand acres. (4)

Though California was once home to one of the largest wild burro populations in the country, BLM only allows a paltry 345 burros or less throughout the entire state today. (5)

The Clark Mountain burros historic Herd Area was originally designated as 233,370 acres. Through BLM land use decisions and HMA designation, only 75,349 acres were deemed suitable for long-term management, a loss of 158,021 acres of habitat. (6)

Then BLM approved a provision that was slipped in the final plan of the 2002 NEMO Amendment to the CDCA that eliminated this last amount of acreage from any further use and this strategy effectively denied the public any right to appeal the decision. Two livestock allotments continue to operate in the area. (7)

In the last environmental assessment issued by the BLM Needles Resource Office that approved of capture plans to zero the Clark Mountain burros out, BLM personnel stated that;

Despite being one of the oldest, rarest and last herds left in Southern California, BLM admitted to both managing and rendering this historical population extinct.

Public outcry was significant regarding the final eradication of the Clark Mountain burros but pleas to high-ranking officials, including the Secretary of the Interior, fell on deaf ears and were systematically ignored.

Volunteers offered to supply all labor and materials to pipe water from the spring to BLM managed land in efforts to preserve the herd but despite this “reasonable alternative”, in January 2007, the BLM removed approximately 100 Clark Mountain burros and the removal of the last remaining 30 wild burros is authorized through 2012.

Posted by Preserve The Herds at 5:56 AM