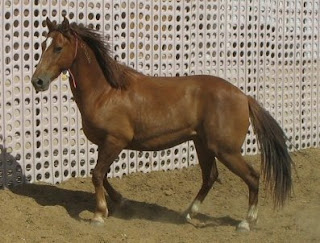 Speaking of poisoning water to kill wild horses, the Nevada Wild Horse Range has been getting a lot of attention lately for the recent deaths of 71 wild horses. Officials believe their deaths were the results of nitrate contaminated water and their deaths have sparked Senator Reid to call for an investigation into the matter.

The Nevada Wild Horse Range was established in 1962 as Nevada’s first and only wild horse sanctuary and most of it falls within the Nellis Air Force Base.

The Bureau of Land Management inherited the Range after the passage of the 1971 Wild Horse and Burro Act and has been managing it ever since.

The BLM defines a “Range” as a herd that provides “unique viewing opportunities” for the public but even BLM can’t often access the wild horses that roam there, much less the general public, due to strict security issues from military operations.

The Nellis horses have always been surrounded by stories of questionable ethics due to the highly restricted nature of their Range. As has already been reported, this was not the first time wild horses have ended up dead in this location and the story about the betting pool of who can shoot the most in horses in the least amount of time has be circulating for quite awhile.

One speculation is that Nellis wild horses can easily disappear to slaughterhouses in order to raise some extra cash by those enterprising individuals that can access them. Besides the obvious reasons of this being inappropriate for an animal protected by State and Federal law, there is also the issue that “horse meat” is not subject to inspections like other meat products. The Nellis horses, having spent a lifetime on a military range, may be shipped to European markets with deadly levels of contaminants in their systems with no safeguards or testing.

While the poisoned water is getting all the attention, the fact that 178 wild horses were driven for miles during one of the deadliest heat waves in Nevada’s history has received no attention at all. Residents were urged to stay indoors, hospitals received a slew of heat-related check-ins, and pet cautions topped the lists of headline on the local news. Yet BLM forced this grueling gauntlet on the wild horses in order to “save them”.

What makes this especially egregious is BLM had been hauling water to the wild horses for two weeks prior to their removals in order to “prevent them from expiring” due to lack of water in the area.

So if they were already drinking from the troughs, why didn't they bait-trap them instead of risking their lives and paying the contractor tens of thousands of our tax dollars to do it?Wouldn’t that seem both more humane AND cost-effective?

In addition to no public witnesses to what really happened during this questionable capture plan, the photo for this article was recently taken from the BLM Internet Adoption site and the capture date is listed as 9/30/06, the very last day of BLMs fiscal year.

Why this matters is, any horses removed from Nellis will not be reported until sometime in December 2007, well over a year after it happened and to the best of my knowledge, no paperwork was ever done that authorized or reported their removals.

Just one more example of how the Nellis wild horses keep falling through the cracks and how Las Vegas’s famous motto stretches even here…….

Posted by Preserve The Herds at 5:33 PM