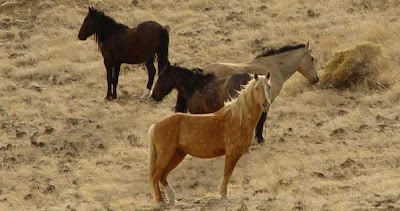 Dances with Horses: Lessons for the Environmental Fringe is the title of the five page article by Richard Symanski but you won’t get a chance to read it unless you are willing to cough up $75.00 to hear what he’s got to say.

It’s a scholarly article with members-only access from the Conservation Biology magazine and opens with “When environmental activists disregard or show contempt for the facts and the rules of evidence, their intrusion into environmental issues may be perversely counterproductive”.

Symanski (1996) is cited by USFWS to add credibility to their inflammatory paragraphs describing wild horse advocates as presenting, “misleading information, “misinformation” and “intentionally or not….[that] have included multiple inaccuracies, unfounded assertions, and/or misunderstandings of the ongoing and proposed programs, and their likely effects”.

On the other side of the tracks, the Virginia Range horses are also in the middle of their own controversy with wild horse advocates squaring off due to Nevada Governor Jim Gibbons' appointment of Tony Lesperance as the new Director of the Nevada Department of Agriculture.

Described as a long-time good ole boy, one of Directors Lesperance’s first orders of business was asking for money to remove up to 1,200 of the “starving Virginia Range horses” and then, when the fact that the Virginia Range horses weren't starving at all got in the way, the story changed to “protecting the range”.

Symanski’s article, which attempts to legitimize “some” wild horse and burro advocates as elements of the environmental fringe, was based on his research of the independent census of America’s herds back in the mid-90’s conducted by the Public Lands Resource Council (PLRC) and Dances with Wolves writer Michael Blake.

The PLRC adamantly maintained that the number of wild horses on public lands was significantly less than what the BLM was reporting and Mr. Blake used their results and a significant portion of his own money to take BLM to court for what he felt was gross mismanagement and malfeasance.

Presiding over the case was U.S. Federal Court of Appeals Judge Royce Lambreth, a conservative Reagan appointee from Texas who ruled in favor of the BLM but went on to stir some controversy of his own after he was assigned a case handling an Indian trust fund in 1996.

Based on what he learned in the Indian trust fund case, Judge Lambreth began repeatedly blasting the Department of the Interior and then BLM Director Kathleen Clark.

He issued a legal opinion in July 2005 that accused the US government of racism and went on to describe the Department of the Interior as, “… a dinosaur- the morally and culturally oblivious hand-me-down of a disgracefully racist and imperialist government that should have been buried a century ago." (1)

A panel of judges ruled Texas homeboy Judge Lambreth had “gone too far” and had “lost his objectivity” and consequently voted to remove him from the case in July of 2006.

And that’s how easy it is.

Whether you’re a famous Hollywood writer, a Federal Court Judge, or just a group of wild horse advocates that bear witness to what officials are doing, it’s all too easy for the “experts” on the government payroll to declare those that oppose them as merely a “fringe element” that has no credibility or worse still, a perverse “threat” to a taxpayer extorted system they too often believe they own.

As for Sheldon, USFWS states they are not really sure how many wild horses and burros still remain on the Refuge with estimates ranging from 786 to 1,547. Several attempts to get more information from Refuge managers and BLM have been greeted with silence, which will probably help them further justify advocates lack of understanding on the issues.
Click Here to view USFWS Final Decision and other documents on the Sheldon wild horse and burro management plans.

Here are links to recent news and related articles about the Virginia Range horses as well.

Posted by Preserve The Herds at 10:29 AM

thank you for posting a link to the article about me visiting the wild horses with LACY J.DALTON on this page. I am sorry, there is no contact button, for I would have written You an email, but I guess this works too.

Well, I am the Baroness, and I would like to invite You to our website, for I have a wonderful little film about that meeting with the wild herd and LACY J. out there in the desert. Please visit www.healing-media.com
Lots of Love and all the best, Antonia Umlauf