The Devil's In The Details 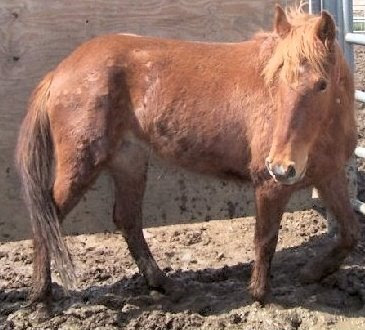 The end of 2007 found BLM removing wild horses from the Antelope and Antelope Valley Herd Management Areas (HMAs) to prevent “catastrophic loss of life”. The ongoing drought coupled with reports of wild horses numbering almost 1,200 forced BLM to declare an emergency gather to save them from starvation and protect the range.

If that weren’t enough, traditionally the wild horses spend the summers in Antelope then migrate to Antelope Valley for the winter ~ except the Nevada Department of Transportation (NDOT) strung up a new fence up on Hwy 93 effectively trapping the horses and in one area, completely cut them off from any water at all.

Speaking to BLMs Kyle Hansen in the Ely Field Office, Mr. Hansen explained range conditions were so bad due to drought that it “looked like an atom bomb went off” and provided photos as evidence of the dust bowl conditions the wild horses would be forced to try and survive in over the winter in if they were not immediately removed.

He also stated compounding the problem was a local rancher who had allowed wild horses to drink water from his property for years but finally “had enough”, fenced the area and now the horses that remained would probably die of thirst.

It’s almost a noble story and one that is often repeated; saving wild horses from dying of starvation and dehydration, protecting the range, wildlife, and ranchers ~ so much of the situation being out of BLMs control and leaving them very little options to preserve wild herds except by removals.

Yet when you look into the details, the story starts to fall apart.
While NDOT may have strung up a new fence, Mr. Hansen stated they never consulted with BLM before beginning and frankly, that’s very hard to believe. There are right of way issues requiring consultation with federal agencies and NDOT not even notifying BLM of a major fencing project that would destroy the Antelope horses migration routes is highly suspicious. Can’t prove this though….

Then there’s the rancher that allowed wild horses to drink his water for years yet now suddenly has a change of heart. Was he paid off to do that? Maybe hassled and intimidated by those who realized if they could get that water source shut down, the wild horses in the area would perish?

Can’t prove this either but there’s a few other questions that have some very interesting answers.

The photo below is one of sixty-four photos provided courtesy of Mr. Hansen to illustrate the devastation of the range. During our phone conversation, Mr. Hansen stated that a few of the photos still had cattle in them but those had all been taken off prior to the Antelope wild horse removals. Those are cattle in the background on the right. 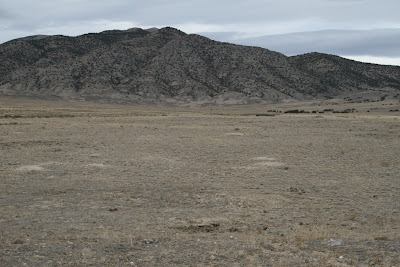 Here’s the first problem with this story. This photo and all the photos BLM sent came tagged with the date, time and model of the camera used, part of a standard format imprinted in photos taken from digital cameras. All sixty-four photos were taken on December 4th, 2006, with a Canon EOS 30D, a year before this potential “catastrophic loss of life” to wild horses.

In other words, that screwed up range photo is “normal” for the area. Well, as normal as an area like this could be during drought conditions and heavily grazed by livestock. But it was NOT reflective of what range conditions actually were despite Mr. Hansen stating the photos were current. No wonder he could say in good conscience that the cattle in the photo had already been removed ~ it was a year old!

Somehow the Antelope wild horses not only managed to live a year in this before BLM announced the need for emergency removals, they were thriving according to the amount of foals being born. Yet despite 1,200 wild horses being counted in the area, not one photo BLM provided showed a single wild horse anywhere.

It’s also interesting to keep in mind as you look at that photo that the wild horses are removed to protect the “thriving ecological balance” and prevent deterioration of the range. Then ask yourself, how much more deteriorated can it get? 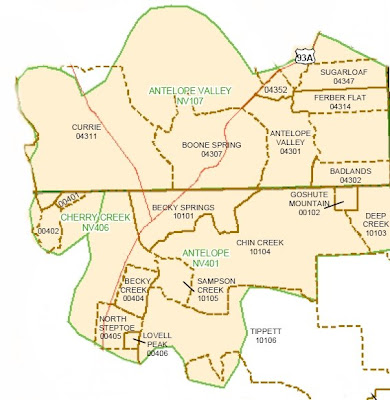 Here are the forage allocations given to wild horses and livestock in just the Antelope HMA. 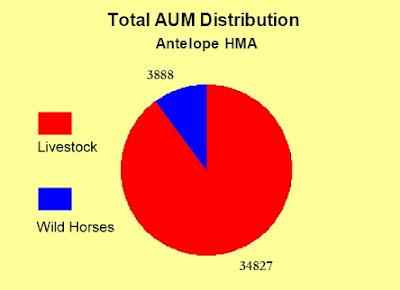 There’s some other problems too.

The Antelope horses were rounded up in 2002 and again in late 2004. Before the 2004 round ups, BLM estimated about 950 wild horses were on the Antelope ranges yet when they finished, they removed over 1,500. After the 2004 round ups, BLM said they left 160 in Antelope and 140 in Antelope Valley and injected the mares with PZP, a three year fertility control drug that is suppose to slow down reproduction by 90% in the first year.

Yet three years later, BLM reports that Antelope now has almost 1,200 wild horses again; 745 in Antelope and 436 in Antelope Valley. That’s a 40% annual reproduction rate despite the birth control and extreme drought conditions.

BLM began removing wild horses on 12/10/07 and according to the Final Gather Report, they finished the Antelope Valley HMA by 12/15. In their summary totals, BLM stated that 413 were removed but when adding up the removals on the daily sheet, only 309 were rounded up, not 413.

Also odd were the daily removal numbers themselves as three days reported capturing 0 wild horses and five days brought in less than 20 with most of those recorded during the last week of the round ups.

So if there are still 300 wild horses left in the Antelope HMA as BLM claims, then why did the numbers being captured slow down to a trickle in that last week? Why are wild horses in the area quadrupling even with birth control? Why did BLM feel the need to juggle the numbers in their reports? And why did BLM provide old photos of the range but claimed they were current if everything going on the Antelope area is on the up and up?